Chris's presence on the honor roll in high school is something he often brings up as evidence of his intelligence. Despite his insistence to the contrary, Chris's past behavior and obvious gullibility, poor communication and self-delusion cast doubt upon this claim. Chris likes to boast of his honor roll status wherever possible as it is one of the easily measurable accomplishments in his life.

In actuality, what information about his grades and behavior in classroom demonstrates either that Chris was a student with a mixed track record at best or that he was poorly suited for mainstream public education at worst. His parents bugged the school county enough to keep him away from special education courses that may have better suited Chris's issues, and as such, it's likely that Chris benefitted from some kind of curve from some of his teachers.

Chris has trumpeted his honor roll status in a number of his documents and videos.

Truthfulness of the claim 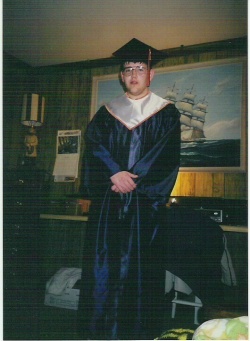 The white stole says Chris made the honor roll, but the slack-jawed stare says so much more. 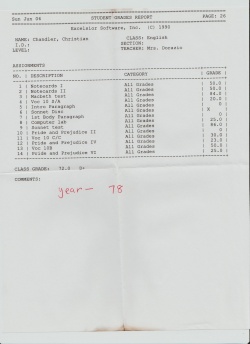 In Chris's graduation pictures from both high school and college, he is wearing a stole that generally indicates graduating with honors. This only means so much without additional context, though. As of the 2013-14 school year, being listed on the Honor Roll for a given semester at Manchester High School only requires a 3.0 grade point average,[3] with no distinction made between harder classes and easier remedial course work (such as the English 12 class where Chris claims How the Pokémon Came into Our PokéBalls got an A). The psychiatrist who conducted Chris's intake survey in 2004 noted that Chris took regular classes in high school, but he may have only had Chris's word for that. Often, even without remedial course work, it's not hard to get honor roll. Assuming 3.0 was a B or B-, getting enough help from his parents with homework might have made up for a C average on tests. In the first semester of 2013–14, 789 students at Manchester made either the Honor Roll or the more prestigious Distinguished Honor Roll,[4][5] about 40% of the total enrollment of about 1,800–2,000.[6] This may explain why Chris was so upset at being awarded only a star pin for his grades.

On the other hand, it is not completely out of the question to consider that Chris may have been able to get decent grades in school, even in harder courses. His emotional and social issues have always made judging his actual intelligence a little tricky. In "Song of Christian", he is enraged to receive an F in English, suggesting that he usually got good grades, and also exclaims: "I mean, I started off with an "A" and you just lowered it, lowered, lowered it!", indicating that he initially made good grades in the class, but for one reason or another, they had slipped considerably by mid-May.

Chris's basic cognitive functions appear to work fine, as the 2004 psychiatric survey confirmed, and in some respects he seems to be no less intellectually capable than many ordinary people. He has a reasonable facility with computers and technology, for instance. At the same time, his laziness, naïveté, egotism, temperament and sexual frustration have led him to ever-increasing depths of self-destructively foolish behavior. The Miyamoto Saga offers an interesting example of this contrast: Chris was bright enough to eventually work out that the e-mails he received from "Miyamoto" came from an easily-spoofed domain; however, one would think that if he could deduce this, he should never have believed that Nintendo was interested in his low-quality spin-off in the first place.

One would think that all Chris would need to do to end the doubts of his alleged intelligence would be to post his grades. Sadly, according to Mailbag 19, Chris's report card papers were said to be locked away beyond his reach. This could have meant a number of things. They could have been buried under the hoard, he might have been lying about their existence, or he might have just been too lazy to get up and find them. Since the house fire and the disorganization of the year-long relocation in 2014, the documents, if they exist at all, are undoubtedly even less likely to ever be disinterred.

Chris also claims that the grades testifying to honor roll status are a matter of public record, and that interested parties should contact the high school directly. However, those who might be interested in accessing the Chesterfield County Public Schools hall of records should note that the school district website states otherwise.[7]

Bob stated in a prank call that Chris did not, in fact, make the honor roll.[8] It is possible that Bob was either mistaken, lying or progressing into senility. Also casting serious aspersions on his purported honor roll status is the fact that, in A Week With Christian Chandler, Chris nonchalantly documented that he slept through much of his class time – in twelfth grade. When Chris reiterated on Facebook in July 2014 that he was honor roll, a friend who claimed to be a fellow alumnus challenged, "How's that possible when you barely passed Mrs. Dorazio's class? Remember? I was in that class with you... you don't have to lie to be cool." Chris's report card for Mrs. Dorazio's class had been leaked the previous month, however (see below), so the friend's comments should be taken with a grain of salt.

In June of 2014, information was released on the CWCki Forums about Chris's high school days. These documents revealed that, despite one or more teachers giving him high marks that he indisputably did not deserve (possibly out of pity or their own incompetence), Chris got a D+ (72%) in English for the spring 1999 semester, and got low scores in at least two other classes. Extrapolating backwards from his English report card, however, his grade for fall 1998 was a relatively decent 84%, probably a B. Suffice to say, this, plus the content of the actual documents, cast yet more doubt on Chris's claimed honor roll status.