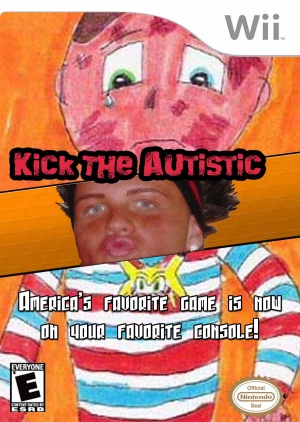 Kick the Autistic is a phrase first coined by Chris when he complained about not receiving preferential treatment for having autism, shortly after he lost Chop Chop Master Onion's Rap Showdown. Soon the phrase developed into a game that consists of doing anything Chris doesn't like. He alleges it is America's favorite, owing to the frequency of his antagonists (perceived and real) playing it. 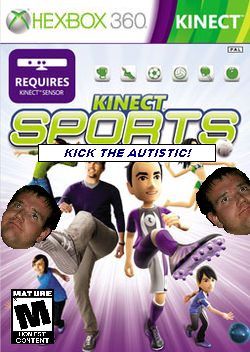 Enter a competition of artistry where Chris is also competing, and beat him. This is generally easily done by showing any sort of competence. Favored by his fellow students and that no-good Adam Stackhouse. Beware: Chris may get grumpy and print your picture out to shoot at, beat you up in Soul Calibur, or make a Lego voodoo doll out of you.

Set yourself up as one of the most visible and recognized representatives of autism within internet culture. Act like an entitled child, and develop horrifying perversions, which you discuss freely on YouTube. Give other autistic people as well as those with Asperger's Syndrome (which he hates) a bad reputation by association. There is a 100% chance this will result in them trolling you.

Pretend to be a boyfriend-free girl. Take the time to befriend Chris until he trusts you. Once that happens, get him to send you horrific n00dz and something of value to him, and record yourself destroying it.

If you are an artist troll or just bored, plagiarize Chris's own plagiarized comics. Chris is very defensive about the material which he has plagiarized, and he will throw a fit and take legal action against you "if not removed by 14 days."

Pretend to befriend Chris, known for being of the completely clueless type and willing to trust anyone who claims to have a china. Then, when you have gained his trust, tell him to do something amusing. Say you are a woman who is turned on at the thought of him recycling. Once this happens, put the goods up on Encyclopedia Dramatica and Kiwi Farms, and sit back as you watch them get their lulz.

Go to Virginia and somehow meet up with Chris while wearing a pickle costume. He will be bewildered by it, and be too powerless to act.

Refuse to bail out the one and only Autistic Hero and center of your universe, Christian Weston Chandler of Ruckersville, VA whenever he hits parked cars, trespasses on private property, vandalizes store displays, incest or macing GameStop employees. Grant prayers to people with concerns that aren't half as important as winning glorious victory over the Trolls and Cyber-Bullies. Finally, refuse to step in when your Autistic Hero accidentally sets his home ablaze.

Push your biggest fan's buttons by changing the arm color of your main hero from tan to blue in your latest game. Watch the hilarity ensue.

Hijack Chris' delusions and tell him that he has to have sex with you in order for them to come true. Spend thousands of dollars for the opportunity to get access to Chris, only for him to epically shut you down.

Run the website Kiwi Farms (Formely CWCki Forums) and build an alliance with Chris, protect him from weens, and help him when he needed it. When the incest allegations come to light, be suspicious of him and start a conversation, find out that he lied about his financial situation and stole money from Barbara (forbidden by an Emergency Protective Order against Chris) and cut all ties.

Gain an unhealthy fascination in Christory, and develop an actual crush on Chris. Afterwards, gain contact with Chris after discovering his phone number on Reddit, no matter how many times you are told not to, and befriend him for a month afterwards. When Chris introduces you to possibly one of his worst trolls, be sure to leak incriminating evidence of him doing illegal activity with his mother on a Discord server, where your friends can upload the leaks on websites like Reddit and Youtube. 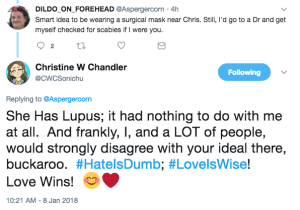