Joshua Conner Moon, better known by his online alias "Null", is the current owner of Kiwi Farms (formerly the CWCki Forums). He was a former advisor for Chris. Though he initially led the forum as a way of monitoring and documenting Chris's shenanigans, over time he shifted focus away from Chris after his father died. From there, he occasionally contacted Chris when it was determined that Chris needed help, like after the 2014 house fire or during the saga of the self-inflicted taint wound.

During the spring of 2018, Null began acting as one of Chris's volunteer advisors, alongside fellow Guard Dogs The Captain and Marvin, helping him by filtering his email messages to weed out ween messages from legitimate business dealings,[5] as well as offering advice, such as warning Chris not to invade people's personal space at other conventions after Chris' behavior had gotten him kicked out of TooManyGames. He felt motivated to assist Chris after learning that the Idea Guys had scammed Chris out of enough money to put him at risk of losing his home.[6]

Null's participation dwindled for a while, but Chris reconciled with him for a while early in 2021. Null positioned himself to be something of a caretaker for Chris, being one of the few people that he would listen to, organizing travel plans for him to safely get to conventions while also getting him in the habit of completing commission work to fund those travel plans. He stated that when Barbara dies, he had plans to try to get Chris into assisted living.

Of course, things did not work out that way. In the wake of the July 2021 incest allegations against Chris, Null had a conversation with Chris in which he found that Chris lied about his financial situation and that Chris had taken money from Barbara's bank account in a potential violation of his EPO. Following the conversation, Null cut ties with Chris, while Chris felt betrayed that the information about his incestuous acts came to light. Chris now sees Null as a Judas Iscariot-like figure once his Messiah complex reached new heights, since he now believes himself to be Jesus reincarnated.

Previously existing as a Chris-focused message board in various iterations, in February 2015 the CWCki Forums was consolidated into the Kiwi Farms, shifting focus away from just Chris as the board expanded its horizons to other potential lolcows. Though he wasn't its founder, Null is the current owner of the site, though has often referred to Chris as a "dead cow" and largely shifts his focus to moderating the other boards.[7] As of 2022, his ill-advised antagonism of certain cows and mismanagement of the site has lead to frequent downtime and deplatforming; this has left Kiwi Farms as a less reliable resource for Chris information and discussion.

In November 2014, Null wrote a post on how he had closed down a private discussion subforum used by trolls. He did so in an attempt to discourage trolls after Thetan and Cousin Al's antics (respectively, impersonating multiple people in Chris's life, and rooting through Chris's garbage), saying that the impact on Chris's personal life was too great to permit the private subforum to remain.[8]

In 2018, Null launched a hosting service which hosted his Kiwi Farms forum. From 2018-2022, Marvin, the CWCki's owner, had the CWCki on 1776's service. As the result of a wave of DDoS attacks against Kiwi Farms in late summer 2022 which rendered 1776 Hosting unresponsive, Marvin opted to migrate the CWCki to another host in October 2022.

The smaller items included, including a letter.

In 2014, after Chris accidentally burned down his house, Null sympathized, as he himself had suffered a house fire in his youth. He organized a fundraiser on the forum that resulted in several hundred dollars worth of supplies being sent as a care package for Chris to get on his feet again, with the remainder of the amount sent as a money order. Mistakenly thinking that the money order was signed incorrectly (and thus rendered useless), Chris insulted Null by calling him a "Dodo brain" on Facebook.[9] In 2017, Chris piled on by tweeting "Null is a dull lull; LOL.[10]"

Null pushed to have the Idea Guys investigated for their alleged extortion and blackmailing of Chris. For a time, Null assisted Chris by screening his messages to separate ween and troll e-mails from legitimate business dealings. The other Guard Dogs had vouched for Null to Chris, who rationalized the inclusion of Null – whom he would have considered a troll at any other point in time due to his ownership of Kiwi Farms – by playing make-believe that Stan Smith, a character from American Dad!, had vouched for Null as well:

Drawing Chris sent to Null. Note how uncomfortable Null's Ponysona looks after Chris hits on him.

Chris's communication with Null got off to a rocky start. Null tried to avoid the subject of Chris's delusions as he did not want to further damage Chris's mental state, but Chris insisted on bringing up the matter. Null was subsequently horrified by what he had learned about Chris's deteriorating psyche:

Shortly after beginning talks with Null, Chris drew an art piece of him as a My Little Pony character to show appreciation for his Guard Dog-related efforts in May 2018, and followed Kiwi Farms's Twitter account a few days later. The drawing features Chris calling Null "handsome and cute". In spite of the best efforts of the Guard Dogs, however, Chris continued to hold many of the Idea Guy-based delusions to his heart as he eagerly anticipated the Dimensional Merge and his role in it.

Despite efforts from Null and the other Guard Dogs, Chris still managed to bumble his way into the embrace of trolls such as the Teen Troon Squad. In addition, Chris constantly tried to steer conversations towards his fantasies as a distraction from the unpleasant reality that the Guard Dogs brought up, as seen in Guard Dog chats. Null was eventually alienated by this behavior and walked away from Chris.

On 25 August 2019, Chris, during his phase of role-playing as Magi-Chan, attempted to get back in contact with Null, though Chris got upset and ragequit when Null refused to entertain his delusions.

Months later, when a Kiwi Farms user wondered if Null would be intervening with Jacob Sockness during that saga, Null reiterated his stance that he had washed his hands of Chris:

In November 2019, Sockness, intent on manipulating Chris to trust only him, maligned Null to Chris, telling Chris that Null was a murderer and accused him of being "the devil in human flesh".[16]

Since Sockness had been giving validation for Chris's Dimensional Merge beliefs, Chris easily took his word on Null, who had only given help based in reality and refused to entertain Chris's fantasies during his time as a Guard Dog. Chris then took to Twitter to denigrate Null and the Kiwi Farms. Among his quotes:

Chris further stated that pony Null would die in the Dimensional Merge, while noting that the Idea Guys would live: 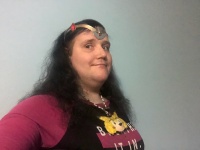 Chris attempts to photograph a profile shot of himself for Null's coin run.

Final design of the coin.

After Sockness's influence over Chris ended, Chris viewed Null as an ally once again. Null assisted Chris with arranging potential interviews.[20] In February 2021, Null asked Chris for permission to use his image in the creation and sale of coins for a Kiwi Farms merch run, also offering compensation for using his likeness.[21] Chris agreed to this and promoted the coins on his Twitter.[22]

Null has stated that he has a plan for assisting Chris with housing for after his mother passes away.[23]

Chris was apparently under the impression Null had ties to organized crime. According to Null, at some point, Chris tried asking him to kill someone.[24] According to Kyle, in February 2021, Chris wanted a hooker and asked Kyle to ask Null to get him one.[25]

In June 2021, Null announced that Chris would attend Everfree Northwest, a My Little Pony convention to be held on 13 August 2021. He mentioned vetoing Chris's plan to drive there and recommended taking a flight, saying he would help Chris with financial arrangements.[26] On 9 July 2021, Null created a GoFundMe campaign to raise money for the trip. The GoFundMe met its $1000 goal 6 hours after going live. Throughout the majority of July 2021, Null helped Chris by continuing to organize and update the GoFundMe campaign.

On 30 July 2021, after evidence surfaced of Chris committing incest with Barb, Everfree Northwest banned Chris from their convention. Null then decided to refund the GoFundMe donors their money as the GoFundMe no longer served a legitimate purpose.[28]

The following day on 31 July 2021, during the fallout from the aforementioned incest allegations against Chris, who was now legally barred from 14 Branchland Court and from contacting his mother for a week by Emergency Protective Order, a conversation was held between Null and Chris. Null, who was allowed by Chris to help manage his email account, noticed an email notification from a bank showing a transfer of $750 from Barbara's bank account to Chris. When asked, Chris initially denied transferring any money, but later admitted to lying to Null about the funds after being confronted with proof.

Null then notified the police that Chris had taken money from Barbara in a potential violation of the EPO and then cut all ties with Chris, blocking him on Twitter and telegram.[29]

In September, Chris, from jail, directed a letter to Null in which he expressed upset at Null for "betraying" him over revealing the theft and mentioned that he had taken the money because he had felt uncomfortable sleeping in his car in a parking lot. He compared Null's behavior to Judas's betrayal of Jesus in the Bible. The money which Chris had stolen had gone toward a motel room (and likely, LEGO toys).[30]