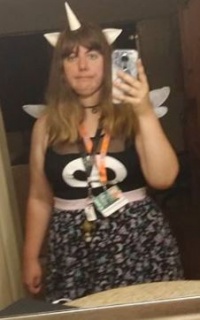 Claire Garcia, screen name Midnight Moonflower (born 2 October 1992), is a former gal-pal who first gained Chris's attention on Twitter by sending him a "Birthday gift" drawing of them embracing. Claire first learned of Chris through Sonichu the Animated Series. While an introduction like that would permanently poison the well for an average person, her initial disgust grew into respect stemming from a feeling of kinship toward him. In many ways (aside from the notable presence of a sweetheart) Claire is similar to Chris: She is artistically stagnant; has been manipulated into sending nudes of herself;[1] and shares interests in Sonic, Pokémon, and My Little Pony. If her behavior and slightly-off tonal inflections are anything to go by, she may be autistic as well.

Chris and Claire's mutual appreciation of franchises targeted towards children and similar life experiences culminated in their meeting at BronyCon. After the event, he would go on to spend the night in her apartment because he lost his wallet. No romancing was to be had that night, however, because a) Claire is married, and b) if anything sexual was to happen, you know Chris would have bragged about it.

The Watchmen entered Claire's Discord server in an attempt to steer her away from contact with Chris as they believed her to be a ween.[2][3][4]

In June 2019, Claire reported Geno Samuel's YouTube channel for bullying, namely, "talking shit". The 'bullying' in question is attributed to a livestream where Geno said he thought Chris looked better than her. This hostility was a great overreaction considering how he immediately followed up the statement with, "I don't want to be mean." Chris congratulated Claire in the action she took, although he confused her reporting the YouTube channel with blocking Geno on Twitter. Unsurprisingly, the channel is still up on YouTube, and the only repercussion from Claire's decision to report it is that her husband grounded her from commenting on social media platforms for a week.

In May 2021, Claire commented on a Dillin Thomas video narrating this CWCki article to state that she had cut off contact with Chris and regretted being friends with him.[5]