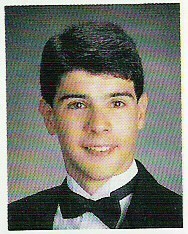 ...and as Chris depicted him.

Joseph Herring (born 14 December 1979) was one of Chris's few male "buddies". They were water boys for the varsity basketball team at Manchester High School. Two years older, Joseph told Chris about his girlfriend, whose name may have been Lindsay. Chris consoled him when he got dumped.[1] According to Chris, she gave him a "bum steer".[2] Chris once rode in Joseph's Jeep when the buses failed to turn up for a game.[3]

Joseph (later retconned as Joe Herr) appears in Sonichu #7 only during a time travel storyline. He is depicted in the comic with a ripped vest, messy brown hair and a bad case of acne. It was presumed that Manchester High employs the use of the mentally handicapped and horribly disfigured students to clean jockstraps and refill water bottles. The reasons given in the comic for his breakup with his girlfriend involve an incident in a restaurant involving "spilled soup" and "tossed salad". A pimply character similar to Joe appears in Sonichu #5 with a girlfriend, both of whom are split apart due to Mary Lee Walsh's quest to make true love illegal in Virginia. It is unknown if this throwaway character is intended to be Joe.

When high-res images from the DVD slideshow were released, it was discovered that Joseph was in fact a good-looking young man with a clean face and neat black hair; it is likely that Chris drew him horribly disfigured to make himself look good in comparison. The LEGO figure Chris made of Joe in 2014 is somewhat closer to his actual appearance.

LEGO Joe. Chris made this in 2014, long after Joe had forgotten all about him.
People
Retrieved from "http://sonichu.com/w/index.php?title=Joseph_Herring&oldid=292078"
Categories: