The idea of getting beagles was originally Barbara's idea, and Chris eventually acquiesced. The CWC community learned of their existence on 1 August 2012, when a link to an entry of them Chris submitted to a local contest was posted on the CWCki Forums; Chris didn't win the contest.

According to one of Chris's Facebook posts, the dogs are siblings. Clover, Chris's dog, has a white mark on her snout, and Snoopy didn't. Clover has a pink collar, and Snoopy had a green collar. Additionally, they each have an animal chew toy - Clover has a duck and Snoopy had a skunk. Barbara claimed in the Rental House Tour audio that the dogs were part fox, though this is incredibly unlikely – no authenticated hybrids between domestic dogs and foxes exist.

Snoopy, who officially belonged to Barbara, was named after the dog from Peanuts, who was also a beagle. Even though Snoopy was her dog, Chris was listed as the person responsible for not getting proper checks and licenses for both dogs, according to legal records from 2016.

Clover is named after the character from the show My Little Pony Tales.[4] 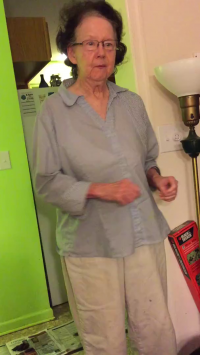 On 6 August 2013, Chris posted on Facebook a picture of dog urine on a newspaper.[6] In December 2014, a statement released by Catherine (who manipulated Chris into inviting her to the Chandler's Rental House) confirmed that the dogs are not house-trained, are aggressive towards strangers, and are severely obese. This was especially apparent in a series of photos released in November 2015. The dogs were still relieving themselves on newspaper in April 2018, evidenced when Chris filmed a paid request video which showed a newspaper with dog shit on it in the background.[7]

In the Rental House Tour, Barbara can be heard attempting to justify her gross neglect of the dogs by complaining about how she's too old to take them out to relieve themselves (despite having only gotten the dogs two years prior). A hole in the fence in the backyard, which the Chandlers never bothered to fix, also may have contributed to Barbara's decision to let their dogs piss and shit on the newspapers within the home.

When Chris reflected on Snoopy's life, he noted that he'd regularly sleep on the couch with the puppies until January 2014. They also would regularly play in a "mountain of clothes" from Barbara's hoard from which Snoopy fell and injured his left back leg, an injury which he would never fully recover from, making it difficult to traverse stairs. Chris also admitted that he and Barbara could have walked the dogs more often, using Snoopy's leg condition as an excuse for why they had not.[3] 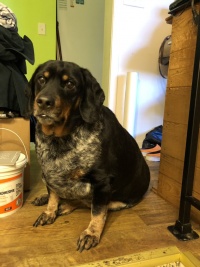 An overweight Snoopy, pictured in December 2018. Note the premature greying around his chin, which is sometimes taken as a sign of living in an uncomfortable and stressful environment, and the overly-long nails.

When faced with a situation where he wanted to go on a date, but Barbara was not home to watch the dogs, Chris's proposed solution was to take the dogs with him, then leave them in the car, though Barbara turned up last minute and was able to watch the dogs.[8] Catherine also stated that the dogs are so terribly taken care of that they can't even be left at home by themselves without destroying all the furniture.

Chris also mentioned to Catherine that he has fed the dogs chicken noodle soup,[5] which can cause sodium ion poisoning if fed from canned soup with high sodium amounts.[9]

In the Rental House Tour, Chris is heard cooing and babbling over the dogs.

In August 2016, even though Barbara and Chris both look after the dogs, only Chris was slapped with two (more) misdemeanors on his record, as a result of the Chandlers failing to acquire proper licenses and rabies checks for the dogs, marking the first time the authorities have gotten involved because of the Chandlers' neglect of their pets. 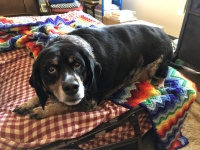 In 2020, Clover and Snoopy were both heard barking loudly and getting overexcited when pizza deliveries summoned by weens appeared at the door while Chris tried reading fanfiction in a livestream. Chris notably yelled "SHUT UP!" at them with a noticeable degree of venom in his voice, before they whimpered and presumably recoiled in fear. Due to happening offscreen, it's unclear if Chris did anything besides scream at his pets to prompt that response, although later footage of the dogs indicate that this kind of whimpering happens when they're approached in general, as Chris was shown speaking in a high-pitched "cute" voice when inviting some guests in.

According to Kim Wilson, Barbara and Chris once tried to steal a neighbor's dog which had been wandering loose. They eventually gave it back when its owner showed up at their door.[10]

Snoopy passed away in July 2021 in his sleep,[2] at nine years of age, a senior age for a beagle. Shortly after his demise, Chris took to social media to offer a eulogy, not unlike the one he gave Patti Chandler so many years ago, recalling when he and Barbara had acquired Snoopy and Clover and memories of Snoopy, describing Snoopy as caring, understanding and smart. Chris explained that he and a neighbor buried the dog by a tree, making a stone mound around where the body lay as a marker for the pooch and that he was saddened by the dog's death.

Chris resorted to his usual coping mechanism of the Dimensional Merge to help him deal with Snoopy's death, which he mentioned in the eulogy as well. He believes that Snoopy was aware of the Merge and imagined that he saw Snoopy merge with his anthropomorphized version in Dimension C-197 - becoming a "tall dog guy" that was taller than Patti-Chan - and noted that he could feel solace and comfort knowing Snoopy could better help with the Merge.[3]

Chris resumed his usual social media habits a day after the dog's passing, though he still mentioned feeling sad about Snoopy in the days afterward. Aside from sharing a few fan tributes to "Snoopy-Doo", Chris fully resumed business as usual later in the month.

Following the incest bombshell, with both Chris and Barb being separated from 14 Branchland Court as a result, Clover and the other surviving Chandler household pets were taken care of by a neighbor.[11] Unfortunately, Clover and the other pets of the Chandler family were returned to Barb's neglect care following her return to the house. Clover can be heard crying for help in the video of some weens visiting Barb.[12] It is currently unknown if any of the pets are being attended to following Barb's car accident and hospitalization, although given that Barb has apparently received assistance from her family, it's likely that they aren't alone.