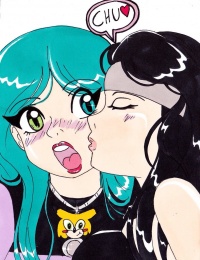 A profile picture Chris used in April 2018 until May 2018, drawn by Tings Tingz.

The CWCProtectSquad were a group of enablers and weens role-playing as fans who are starved for attention to the point that they frequently tweet to Chris and his orbiters over Twitter. Chris has added them to his Twitter friend list as they shower him with words of encouragement, fanart and even money.

The floodgates opened during August 2017, seemingly due to Chris using NightStar2891, a sockpuppet account, which encouraged weens to create their own character accounts to troll Chris's followers into thinking they are him.

Appears to be the spokesperson and de facto leader of the CWCProtectSquad. Her modus operandi is to shower unconditional positive regards towards Chris. She got Chris's attention with a drawing that had the hashtag #CWCProtectSquad. CWCProtectSquad was pretty much the Twitter version of Sonichu Girls, as all its members were supposed to be young female artists that would stand up for or support Chris when needed. On 10 May 2018, During the dallfall of CWCprotectSquad, LittleAmyChan sent Chris a private video, which Chris posted the video on his Twitter and when asked why, he basically said littleAmyChan looked like a man pretending to be a women and is probably a troll based on that alone. LittleAmyChan still followed him afterwards and still maintains the facade.

Made 993 tweets to Chris and orbiters as MissLadyLikely (Desiree Delightful) and BarbAChandler.[2] During the Idea Guy saga, in December 2017, Desiree decided to experiment by copying Idea Guy's shtick and role-playing as an alternate dimension Barb. It resulted in Chris angrily reporting the account and unfriending it.[3]

In December 2017, Desiree added some Twitter DMs with Chris to the CWCki.[4] Occurring from September and October 2017, Chris discussed his method for recuperating whenever he sees pickles and explained why he signed up to Kiwi Farms.

Desiree did not stop trying to get Chris's attention. The account's tweets were purged and it was later rebooted as SaraHeartsSonic. After a string of messages tagging Chris,[5] he decided to re-follow the account, apparently unaware of its history. SaraHeartsSonic would go on to make 862 tweets by 4 May 2018.[6] For the most part she would play along with Chris's delusions and "support" his insane ideas, but would occasionally cross into criticizing him.

On 4 May 2018, Chris began to realize the Sara account was not a legitimate fan.

Another user, who also has autism, joined in the thread and showed off her artwork to SaraHeartsSonic.

This caused Chris to flip his lid:

On 7 May, after Chris called out the group, as well as Sara for being trolls, he blocked Sara. Naturally, this prompted the ween behind the account to delete all tweets and reboot it yet again, as PollyAnnPikachu, with a persona of a sexy Pikachu cosplayer, making 26 tweets.[7] Of course, Chris quickly followed the account, despite warnings from other orbiters of the account's true nature. He eventually listened to reason and unfollowed it the next day.