Larry Vaughn, also operating under the alias Miss L, is a troll persona portrayed by Twitter user and furry[2] LarryVaughn78,[3] who surfaced in January 2021. He manipulated Chris into sending DMs to Twitter users including rogueManYT,[4] zero_mccall,[5] and Dubmare[6] on 14 January 2021 containing bizarre sexual and religious statements, including a "ciphered message" of a quote of perverse sexual fantasies from serial killer Albert Fish.[7]

The persona of "Larry Vaughn" is derived from a supporting character from the first two Jaws films: he is the mayor of the town beset by shark attacks, whose unwise governing decisions end up costing lives.[8] 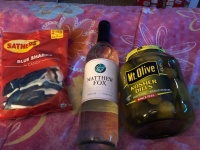 On 3 January 2021, Chris received an introductory letter and gifts from "LAnon", a group posed by Vaughn which claimed to be an organization that could see into other dimensions. He also received text messages from Vaughn's character Miss L, who claimed to be part of the group. Chris was a bit skeptical, but because Vaughn had stroked his ego by buying him gifts he wasn't willing to dismiss LAnon completely. Chris consulted with the Watchmen, who tried to talk him out of engaging with LAnon.

Despite being warned, Chris proceeded to walk straight into Vaughn's trap and followed his instruction to send the perverted Albert Fish quote to various Twitter users. 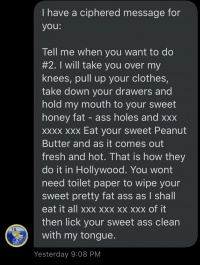 The "ciphered message" Chris was told to send. 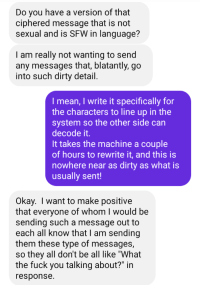 While these three Twitter accounts are the only ones known to have publicly leaked Chris's DMs to them, the redacted contents of the LAnon letter[11] and Miss L texts[12] indicate that Vaughn instructed Chris to contact at least 19 other accounts, if not more, be they on Twitter on otherwise. What exactly Chris wrote to them, if anything, remains unknown, although it was likely just more of the "ciphered message" quoted from Albert Fish.

After the Twitter users leaked the messages, Chris gave a cryptic response to rogueManYT:

In private chats with the Watchmen, Chris was too proud to admit he had been fooled and claimed it had been part of his master plan.

The Watchmen again tried to tell him to ignore Vaughn.

Chris continued giving attention to Vaughn. On 22 January, he tagged Vaughn's Twitter handle with a lengthy rant about him.[1] On 25 January, he replied to a comment from Vaughn which made fun of Chris's "word soup" ranting style:[15]

On 29 January, Chris again responded to more of Vaughn's ribbing.[16]

When another Twitter user pointed out that, in fact, he had, and pointed out the flaws in Chris's fantasy coping mechanisms, Chris shot back:[16]

As seen in text messages Vaughn sent to an unknown third party and posted by Chris to Twitter,[1] he had a collection of ways in which he wanted to troll Chris. Most of these ideas had already been done by the trolls of years passed, such as posing as a sweetheart and making Chris drive to a location. Vaughn would pull a page out of the Idea Guys' manual and use the threat of a bunch of fictional characters which Chris believes are real to blackmail him into being his plaything. Chris would have to contact Null and ask him if he and Praetor could accompany him to Disneyworld in Florida. On the way there, each "male identifying member" would take a shit in a Buc-ee's urinal. How Vaughn thought any of this would work is a complete mystery.

Thankfully, because he shot his load too early with the scat DMs, Vaughn's plans never came to fruition, although the person behind him is still at large and will most likely continue to be a massive autist.

Vaughn vs. Praetor vs. The Watchmen

On 11 February 2021, Vaughn made a Kiwi Farms account[17] and started posting in a recently-created thread dedicated to discussion about Chris's use of a taser and Praetor's involvement in the affair.[18] The Watchman Naught had been leaking several tidbits of information about this event, going so far as to dox Caden Peck, the leader of Praetor,[19] and Vaughn decided to join in. After being prompted by another user, he made several unsubstantiated claims about Praetor, including that they allegedly tried to involve him in their business efforts and that they approved of some of Vaughn's trolling plans, even being willing to finance the trip that Vaughn wanted Chris to take to Florida.[20] He followed this up by posting numerous screenshots of his conversations with Chris,[21] then further doxxing Caden by posting his phone number.[22]

Perhaps not wanting Vaughn to get away with his trolling attempts unscathed, Naught responded to this by posting Vaughn's supposed real name as it was given to Chris, as well as his phone number,[23] both of which Vaughn dismissed as fake.[24] Upon further interrogation by Naught on his motives, Vaughn then claimed that he wanted to try and get Chris to end his belief in the merge or get help (a statement that seems at odds with his actions), which then shifted into a desire to make Praetor look incompetent, because he believed them to be "fucking nuts."[25]

Posted by Chris to Twitter, the screenshots are apparently of Vaughn laying out additional troll schemes to a third party.[1]