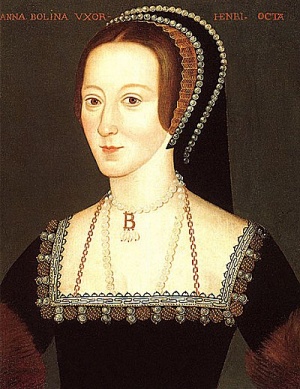 Chris's alleged progenitrix. Perhaps her bloodline resulting in Sonichu was why she was called a witch.

Anne Boleyn (c.1501/1507–1536) was Queen of England and Ireland as the second wife of King Henry VIII. Chris claims to be a descendant of her from his mother's side of the family, via a certain Daniel Weston who was purportedly on the Mayflower.[2] Chris cannot even spell "Boleyn".[3] It is unknown whether or not Chris and Barb plan to produce evidence of their ancestry and topple the current royal House of Windsor. 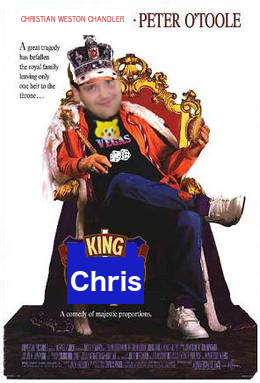 What Chris and Barb probably want to do with their royal heritage.

History buffs may notice a problem with this; aside from the fact that Daniel Weston never even existed, Anne Boleyn had only one daughter: Queen Elizabeth I. It is impossible for Chris to be descended from her, or indeed for anybody to be; Elizabeth I was childless and was in fact famously known as the Virgin Queen; indeed, Chris's home state of Virginia is named in her honor. The only conceivable way would have been through an illegitimate child, who by definition could not be royalty. The closest authentic involvement that Chris has to the English royal house is through his remote ancestor Ludovico Bassano, who was Good Queen Bess's court musician.[4]

Current evidence suggests that Barb gave Chris this idea, which seems likely as he's been rambling about his ancestry for years, even before his discovery by the Internet. In August 2005, he tried to impress a girl on MySpace with this "fact" because she was interested in royalty.[5] This may have been this ridiculous notion's first outing, but it was not to be the last - as recently as 2014, in the Rental House Tour, Barb and Chris bored Catherine and Cousin Al to tears with a completely fictitious account of how the Westons are considered royalty to this day, and that she and Chris were "blood kin" to Queen Elizabeth I.

In late 2008, Chris deduced (or more likely decided) that he is descended from Mary Boleyn (Anne's sister),[3] and from Richard Weston, 1st Earl of Portland (born 1577),[6] and later Earls of Portland.[7] Chris had looked up Richard Weston and Mary Boleyn on Wikipedia to find a link between them[8] which fortifies the view that Chris and Barb made the whole thing up. There is admittedly a possibility that his family tree loops back on itself, but it's probably a good deal more recent than the Tudor period.

In May 2009, Chris also cited his ancestry as one of the reasons for Wikipedia to have an article on him.[6] In the comics, Zapina is said to be studying at "Bolyn High",[9] probably named in reference to Anne Boleyn.