Adam Stackhouse was the winner of the Chop Chop Master Onion's Rap Showdown PaRappa the Rapper contest. Chris felt that he should have won instead, and thus harbored a grudge against him.

In order to win, Chris orchestrated a mass spamming of votes via dummy sockpuppet accounts, so that he would not only win a PSP for his then love interest Megan Schroeder, but also claim the prize of an all-expenses-paid trip for two to the 2007 Penny Arcade Expo. He had hoped to bring Megan on the trip and eventually make love to her in their shared hotel room, losing his "virgin with rage" moniker once and for all. As a result, Adam had inadvertently cock-blocked Chris, by simply being more talented.

In a huge display of hypocrisy, Christian wanted to get back at Adam for cheating, as he used more than one person in his video (in a rather nice display of family, Stackhouse's little sister has a role, which Chris believed was illegal, even though Adam does all the singing) and used music in the background (which didn't count as it was beatboxing, even though Chris believed it was a boombox). Chris ignored the fact that not only had he himself also cheated by registering many fake accounts to vote for himself, and also blackmailed his half-brother into voting for him as well.

Chris was so angry about the outcome of the contest that he created a fake webpage proclaiming himself the victor.[1] He also created a creepy video in which he repeatedly shot a photo of Adam and his sister in silence with a toy gun.

Adam Stackhouse is the complete opposite of Chris. Evidence to prove this is the fact that he graduated as a valedictorian of his graduating class in college.[2] He also owns his own production company, AVAdventure.[3]

He also thought Adam was cheating because he thought Adam's beatboxing counted as background music, even though beatboxing is music made with the voice and is therefore a cappella. Naturally, Chris ignored the fact that he cheated himself by bombarding Sony with fake accounts in order to win.

In a PlayStation Network post from 4 August 2007, Chris goes into detail about his feelings on Adam Stackhouse: 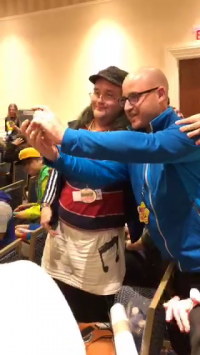 Adam's initial reaction to Chris was to threaten legal action against him for harassment[5], but later relented after probably realizing it would not be worth pursuing.

A decade after the Chop Chop Master Onion Rap contest, Adam attended MAGfest in 2018, even attending a panel dedicated to Chris, which was originally meant to be more scathing but ended up being a bizarrely wholesome experience where Chris somehow became the guest of honor. Adam and Chris even posed for a selfie with each other - Chris's interactions with him at the event showed that he no longer holds his animosity towards him, and the two have finally made peace with each other.