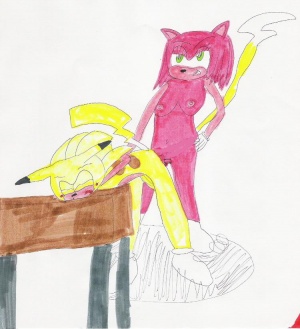 The picture Chris drew for Sarah, Rosechu with a Pickle.

Sarah May was a gal pal of Chris and co-founder of the Sonichu Girls forum. Sarah May came to Chris's defense in the IRC (20 January 2009) chat.

In Mumble 8 (17 February 2009) Sarah May confronted Chris - he had offered Emily a threeway with him and Julie, but Sarah May thought she had the offer first. Over the course of a long argument, Chris became increasingly frazzled, and called Sarah May "Julie" four times in quick succession.

And so a distraught Sarah May decided to commit suicide. Chris released a video in which he seemed to show genuine remorse. Apparently, Sarah May did not go through with her suicide attempt.

After having several average conversations with her on Skype, on 4 March 2009 the conversation took an increasingly dark turn. Sarah May's façade slowly wore off during the conversation, eventually revealing herself as a troll. The breaking point was when Chris told her to come to 14 Branchland Court, and she began interrogating him, culminating in her asking him to draw Rosechu with a pickle in order for Chris to get his Yahoo! account back.

Sarah May did not appear on Chris's "Gal-Pals and Past Sweethearts" page, either because he knew she was a troll or because he forgot about her.