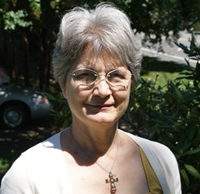 The Rev. Rochelle "Rocky" Shoemaker is a retired pastoral counselor (actual title - "Assistant Pastor for Care Ministries") from the Wesley Memorial United Methodist Church, who has advised Chris on several matters since 2008.

On 11 September 2008, after nudes of his were leaked to the internet by a troll who deceived him, Chris sent to his Reverend Elizabeth Foss an email in which he told her about his foolish acts and asked her to forgive him. Five days later, Elizabeth replied and referred Chris to the church's new pastoral counselor, Rocky Shoemaker,[3] beginning her role in Chris's life.

She brought about the end of the Ivy Saga in 2009, by pushing Chris to go to the police about Ivy.[4]

The last straw came in the form of Joshua Martinez, a.k.a. Vanessa Hudgens, who tried to swindle some money out of Chris by trading him a PSP. After that, Shoemaker made Bob Chandler and Barb contact the cops. The agreement was that the cops would only be involved in the Joshua matters, as they were dealing with the trolls on their own terms. However, Rocky blindsided Bob and Barb and brought up Ivy and the trolls with the cops. She even had them try to find Ivy and even managed to get a background check on her and came up with nothing.[4]

In a July 2009 IRC Chat, Chris, believing that he had entered the chat incognito (although the trolls had in fact instantly seen through his false identity), suggested that the trolls force him to rape Rocky. Rocky herself is aware that Chris said this. The fact that she did not kick him out of the church on the spot speaks volumes about her patience.

According to Chris, it was Rocky and her husband who bailed the Chandlers out of jail following the events of 28 October 2011 [5]. Rocky also helped put the Chandlers in touch with their defense attorney, Mr. Rob Bell, a fellow Methodist.

In the aftermath of the Idea Guys saga, the Guard Dogs advised Chris to talk to Rocky about the situation, hoping it would help expedite an official investigation into the alleged extortion by the Idea Guys. However, upon talking to Chris, Rocky advised him to seek therapy in lieu of escorting him to the police to file a report.[6]

Rocky Shoemaker might be the only person in the world who is genuinely concerned about Christian's well-being. Judging by her approval of the Love Quest, it can be inferred that she supports Christian's desire for china. Rocky recommended to Chris the children's book How to Talk to Girls.[8]

Despite saving him from the wiles of Joshua Martinez and Clyde Cash, it seems as though Rocky is ineffective at making an impact in Christian's life where it really matters - namely his lust, gluttony, avarice, sloth, wrath, envy and pride. Clearly she hasn't been able to stop Chris from sending nudes of himself online (the reason why he was referred to her in the first place) as his privates were seen by the internet no less than five different times after Chris started receiving counseling from Rocky.[9]

In the past, Chris has insisted that Rocky is a better counselor than a professional psychologist,[10] and seemed to uncritically accept whatever she said. Later on however, Chris came to conclude that she was an ineffective counselor, as evidenced in his letter to his church. In a demonstration of pure insolence, Chris did not forward the letter on his own but sent it to Rocky via iPhone, asking her to print copies of it and spread it in among Wesley Memorial's parishioners.

The date of the letter is unknown, but cannot have been written earlier than July 2011, as Ed Winkler, the pastor mentioned in the letter, joined the staff of Wesley Memorial on that month.[11] 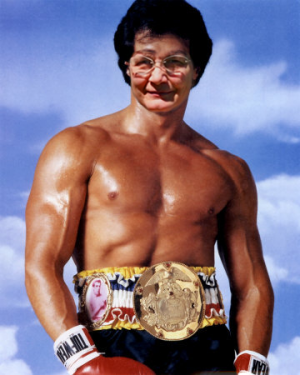 Rocky Shoemaker in her younger days

In a monumental display of ill-judgment, Rocky provided a great deal of information about Chris's home life to a troll posing as a court-appointed psychiatrist during a phone call in the run-up to his scheduled court appearance in December 2011. During this call, it was revealed that Bob had been quarantined for bug bites shortly before his death, and that 14 Branchland Court was so badly infested that Chris was forced to stay in his room to avoid being bitten himself.