The Guard Dogs were a group composed of The Captain, Marvin and Null. They attempted to protect Chris from manipulation by enablers.

With the revelation that the Idea Guys were still actively manipulating Chris in early 2018, a new effort to systematically dismantle their and other trolling operations began. Now known as the "Guard Dogs", this group sought to replace the old guard that had once existed before, and optimistically tried to curb current-day weening. This group has since been credited with the outing of both the Idea Guys and the Teen Troon Squad. Their efforts have been met with mixed reception. While most on Kiwi Farms praise their rescue of Chris from the Idea Guys' grasps, others criticize the group for being white knights.

The Guard Dogs have since given up on Chris, who insists on finding new enablers to play make-believe with such as the CWCProtectSquad and the Watchmen.

The Captain, unlike the other two involved, had no past history with Chris; stating that he only "fell into the whole thing by a matter of association".[1] Like Null, he has since withdrawn from his position, and no longer supervises Chris's on-line Interactions.[2] Little is known about him past this.

Main article: The Man in the Pickle Suit

Marvin, also known as "The Man in the Pickle Suit", is a former troll of Chris' who has stayed to the bylines, only to then pay little mind to Chris. Because of his status as an active Christorical figure, however, he's often contacted for advice in both trolling and counter-trolling efforts.

Joshua Moon, also known as Null, is the current owner of Kiwi Farms. He became involved mid-way through The Captain and Marvin's investigation of the Idea Guys' Discord, and was largely behind the push for the Idea Guys to face legal repercussions.

Rescue from the Idea Guys

In late April 2018, Anna McLerran contacted The Captain stating that she was worried Chris was being actively manipulated.[3] She was unable to get any confirmation, however, due to Chris refusing to give any information.

Based off of this, The Captain began attempting to contact Chris. He was eventually able to gain his trust, but only by playing along to his delusional beliefs. Chris then revealed to him that he was in a top-secret Discord chat with the Idea Guys on a separate account they had created for him. At this point, with the coaching of Marvin, The Captain had multiple conversations with Chris in which he attempted to convince him that the Idea Guys were bad people who had only hurt “fake” characters. Chris eventually came to trust him, but only after using his “mind powers”.[4] In response, he gave The Captain full control to his accounts so he could gather evidence against the Idea Guys. OPERATION: Kingsnake, as members of the Guard Dogs referred it to, was now in motion. 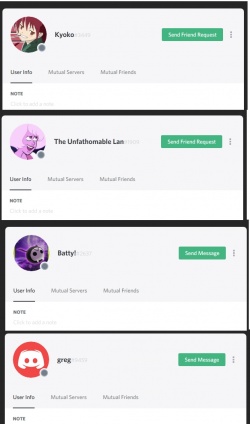 A screenshot by The Captain revealing the profiles of four of the Idea Guys.

When The Captain first logged in to Chris’ Discord account, he was overwhelmed by how far the Idea Guys had gone to take advantage of Chris. Their tactics ranged from extortion, to threats, and even blackmail. He once again went to Marvin with this information. To stall the Idea Guys so they could collect evidence, the two began roleplaying in the server as Chris. This stalling lasted upwards of a week. Whenever the Idea Guys asked The Captain something he didn’t know, The Captain would ask Marvin and Chris for direction and then reply accordingly. At one point during the week, the Idea Guys became suspicious, and asked Chris to post photographic evidence to prove that he was indeed himself. They quickly had Chris take this photograph for them, writing the desired message on a dry erase board. They were also able to collect the IPs of Wise and Boyd using an IP tracer, as well as the IP of a third unidentified Idea Guy.[5] During this time, Chris was told to take a break from the internet for a week, to which he complied. He spent that week catching up on the shows Wise and Boyd had “banned” him from watching, which included My Little Pony and “nearly everything on Crunchy Roll”.[3]

Eventually, Marvin managed to build a script that ripped the server's chat logs straight from Discord, archiving the hundreds of pages of the Idea Guys' debauchery. Once all of the images and chat logs had been saved, Chris’ Discord account went silent and remained offline. A couple of days later, Wise and Boyd realized what this new inactivity implied, and began sanitizing the server. They banned Chris from the channel, and deleted every private message they had sent him one by one. For them, however, it was already too late.[3] 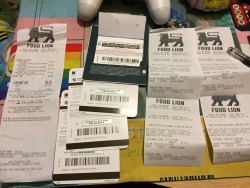 Receipts of items Chris bought for Wise and Boyd, which were kept by Chris.

Midway through their infiltration of the Idea Guys’ Discord, Null was brought into the process, filing reports with the FBI, Greene County Sheriff, and even calling Boyd’s mother. The other Guard Dogs vouched for Null to Chris, who rationalized the inclusion of Null - whom he would have considered a troll at any other point in time due to his ownership of Kiwi Farms - by playing make-believe that Stan Smith, a character from American Dad, had vouched for Null as well:

Chris forwarded Null, Marvin and The Captain any and all suspicious incoming messages and gave the three full access to all of his accounts. For once, Chris's tendency to hoard turned out to be a blessing in the form of vital evidence; he still had all of his receipts from Food Lion, which he had used to purchase Amazon/GameStop gift cards for the Idea Guys. He also took screenshots of his GameStop order history to prove that he had purchased and sent PS Vitas and other items to Wise and Boyd’s personal addresses. In total, the Idea Guys extorted approximately $6000 from Chris. This resulted in Chris facing serious monetary issues.

To this day law enforcement have yet to act on any of Null’s reports. Greene County Sheriff Steven S. Smith refused to act, stating that it was Chris’ choice to shit on the floor. The FBI was sent his IC3 twice (once online, another in-person by Chris) but no action was ever taken. Thus, Wise and Boyd have yet to face any legal repercussions for their extortion and blackmailing of a mentally handicapped individual.[4]

Upon realising that Chris was selling his Amnyfest Ring during the depths of the Financhu Crisis, it became apparent that this artifact should not leave Chris's possession, and so a plan was set into motion to rescue it, rather than having the item be sold to someone unaware of its importance. The Captain stepped in, and purchased the ring for $200[7], then presented it to Chris, explaining that it was actually the Reality Stone, and had the power to change CWCVille back to anything Chris wanted it to be, thus reverting the changes the Idea Guys had made - although sadly, Chris continued to believe in much of what they had instilled into him over the subsequent months. At some point before July 2018, The Captain sold the ring back to Chris, triumphantly returning the artefact to its rightful place. 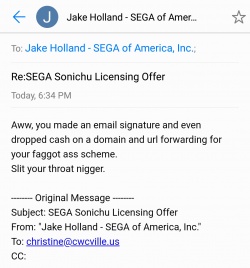 Null angrily insulting a ween with a racial epithet.

Drawing Chris drew for Null to show his appreciation.

After the Idea Guys were successfully removed from power, Chris began speaking to Null, Marvin and The Captain regularly. They began actively monitoring his accounts, with Null personally reviewing all of Chris’ emails,[8] in some cases acting particularly aggressively towards weens attempting to get in on the action.

This lead to Chris and the three to speak on very friendly terms, with Chris even drawing Null his very own original My Little Pony character. They also tried to coach Chris on how to better protect his social media, though their efforts were in vain.

Null has written and published a handful of articles onto Kiwi Farms regarding the content retrieved during their infiltration of the Idea Guys' discord server.

On 11 July 2018, Null released his account of the dismantling of the Idea Guys onto Kiwi Farms in a thread titled “The Chris-Chan Extortionists”. Written for a broader audience, he reveals to what extent the Idea Guys had manipulated Chris, and his frustration with law enforcement’s inaction.[4]

On 13 July 2018, Null released Cryzel Torture, a nine-hour-long chatlog in which Wise and Stephen Boyd berate Chris and continue to convince him that his characters were being tortured.

Inevitably, Null’s involvement in the "guard dog" saga didn't last long, as Chris's incompetency pushed Null away like so many others before. Null was quickly alienated by Chris due to his refusal to play along with the Dimensional Merge, and as a result, Null lost much of the sympathy he initially held for Chris. In a livestream from November 2018, he stated that he no longer wanted any part of the operation, finding the enabling tiresome. He also reveals that at one point, he had arranged for a moderator who lived near Chris to drive to his home when Barbara died so Chris could be swiftly moved into an assisted living facility. It remains to be seen if this arrangement is still in place.

On 25 August 2019, Chris, during his phase of role-playing as Magi-Chan, attempted to get back in contact with Null, though Chris got upset when Null refused to entertain his delusions.

On 25 December 2018, a person posing as Magi-Chan posted a tweet linking to a (since taken down) Pastebin, now referred to as "The 'Teen Troon Squad' Reveals Themselves". This Pastebin elaborately doxes Lukas, one of the squad's members, revealing his birth name, home address, and a supposed phone number. Naturally, when the link was first released, there was much speculation as to who had actually written the tweet. Ultimately, it was determined that it had to have been done by someone Chris had trusted with his password; significantly narrowing down the suspect pool. Lukas would later claim that The Captain was responsible for doxxing him.