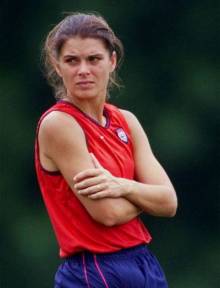 Mia Hamm after reading this article.

Mia Hamm (born approx. 1987-1988 or 1991-1992) is the pseudonym of the woman Chris finally completed his Fuck Quest with, relieving him of his status as a virgin with rage. Named after the former soccer player of the same name, she is a boyfriend-free hooker who advertised herself on Backpage.com - a site seized by the feds in 2018 for sex trafficking ties.[2] Chris paid for an hour with her in April 2012, which cost him $150 of his tugboat, and later had sex with her again the following month.

He chose to have intercourse with her despite his previous statements that he would not hire a prostitute because it would render the act of sex meaningless. His decision was motivated by a fear of going to jail for an incident that took place in October 2011, although prostitution is also illegal in Virginia.

Details about Mia were revealed publicly in a text document Chris sent Renee. The document was originally an email given to an unidentified individual who provided Chris with Mia's Backpage ad. While Chris is no longer a virgin, he still has rage, albeit not to the same extent, and it doesn't seem like getting laid solved Chris's deep-seated problems like he expected it to. 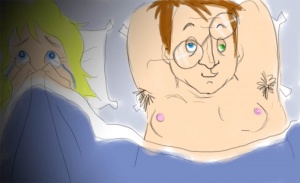 Chris describes Mia as a black-haired, blue-eyed woman of 24, although her ad claimed she was 20. She has an "average" figure with C-cup breasts. Her personality is described as "nice, likeable, and down to earth." She has piercings on her lip, tongue, and nipples. She is half-Cherokee as well, which Chris enjoyed. Mia has two daughters to a man who abandoned her. Given her young age and the fact that Chris states that she had them "years ago," this could possibly mean that Mia was a teenage mother. The girls stay with their grandmother. Mia travels from town-to-town and is attempting to get an education to give herself and her daughters a better future, and told Chris that her escort service is just "a quick spot of cash for her." While working in Charlottesville, she serviced her clients at a Days Inn hotel.

Mia appears to have since quit the escort business, as she took her ad down by May 27,[3] five days after her last known posting and no subsequent ads by her can be found. The title of her last ad read "Just arrived MIA Hamm¡¡¡¡§pec@ils all day & night – 20," and it included a picture. However, the ad itself is unfortunately irretrievable, so its contents are unknown.

As for Chris, aside from a brief raising of his spirits (among other things) and getting a little ego boost from having "done it", the sexual encounters that he had with Mia did little to lift him out of his state of depression at the time. In the years since the time he got laid, Chris has been largely uninterested in hiring further prostitutes and has gone back and forth between wanting an actual romantic companion and being satisfied with either enjoying his self-proclaimed marriage to fictional characters and/or screwing his mother.

After recieving Backpage ads of escorts from his unknown contact, Chris drove to the Days Inn located between Route 29 and Route 250 to have sex with one of them. Mia was not Chris' original choice and was actually the third escort he contacted. "Riley," the one he intended to have sex with, never responded his calls, and "Kristen," his next choice, was unavailable. Chris then decided to call Mia, who was able to see him and told Chris she could be found in room 338.

Upon entering her room at 4:30 PM, Chris could tell that Mia had been smoking weed, and that made him uncomfortable. He calmed down, however, after smelling hand sanitizer. They stripped for each other, and "communicated good throughout." At Mia's insistence, Chris wore a green-apple-flavored condom. She applied it to him with her mouth, and then began to give him a blowjob. Chris enjoyed it, and states that her tongue piercing added to the pleasure of the experience. Afterward, she laid beside Chris on the bed and they began feeling each other up. Chris described her china as feeling "really good," and he found her clitoris though Mia did not allow him to finger her. They began making out (but no tongue), and then Chris gave her a massage that he also gives Barb, which he claims she enjoyed. Then, Chris informed her that he was ready for hanky-panky. He "requested Cowgirl, with possible missionary later," though this did not happen.

Afterward, Chris washed his duck with a washcloth he had brought with him. They spent the rest of their time conversing, and Chris gave Mia a gift basket containing "three apples, lavender air-freshener, breath mints, a 4-gig flash drive with the track sets of the 1990 WTJU jazz marathon, Teenage Dream and Stronger (What Doesn't Kill You) album tracks, and a Hello Kitty Pez Dispenser."[4] Mia told him a bit about her background, and Chris talked to her about the trolls. He also talked to her about Family Guy and South Park before her clock chimed, indicating that her next appointment was arriving. Chris promised that he would call her later, which he did at around 6:30. Mia had already finished with her next client, and told Chris that he was a disappointment to her. She said that the man's penis was smaller than Chris's and that it was a "wiener in a hallway" situation. Very soon after, Chris posted on Facebook that he was no longer a virgin. He taunted trolls with the fact that the only people who would ever know the full story would be himself, Mia (whose alias he did not mention), the person who put him in contact with her, and his future sweetheart. Apparently, Chris sees no problem with telling a potential girlfriend that he had his first sexual encounter with a prostitute, and expects them to be completely okay with this. Chris saw her again the following month, though the details of their second encounter are unknown. Mia appears to have left the escort business very soon after her second meeting with Chris, meaning that he would have been one of her last clients.

Given what we know about Chris, there is a strong possibility that this is not the TRUE and HONEST version of what happened. Chris paints himself as being unrealistically competent at sex for a virgin whose only prior knowledge of it comes from pornography. Additionally, Chris describes the incident as going off without a hitch, which is highly unlikely for a number of reasons, the most obvious of which is his horrifically bent duck. It is highly likely that Chris is omitting unflattering details or making up flattering ones to make himself look better. Chris's notion that Mia enjoyed the experience probably stems from the fact that prostitutes often pay their clients compliments, because it helps them make money to do so. Chris would probably be naïve enough to believe that she was being sincere, or he could just be telling himself that she was in order to serve his already massive ego.

Indeed, in response to speculation about the event on the Chris discussion board CWCki Forums, Chris' former troll Alec Benson Leary wrote: