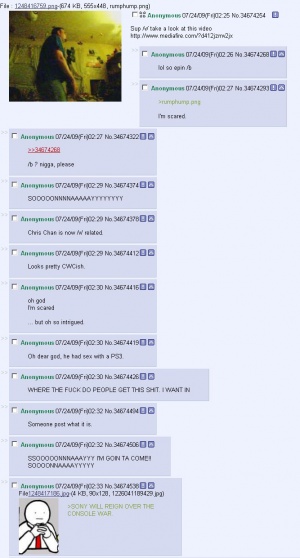 On 24 July 2009, a video of Chris humping his beloved PS3 was leaked onto 4-cent garbage's /v/. In it, Chris makes love to his "Life Upgrade" for eight minutes, although he can only stay standing for the first minute. What might at first seem to be just an impressive display of fanboyism is actually a desperate plea for the return of his international PlayStation Network accounts, seemingly being held to ransom by the irrational expert hacker Jack Thaddeus.

Chris himself sat in on an IRC chat where a coterie of trolls planned the making of the video, where he believed that he had effectively hidden his identity. Bits of Chris's monologue are simply repetitions of what he heard during the chat.

In his wisdom, Thaddeus never returned the PSN accounts to this day.

This hurts! OH, this hurts! OH, this mother...fucking...hurts...uh...mother...uh...uh...uh...motherfucking hurts. Give me back my PlayStation...Network...'counts. [moves the camera closer] Oh, and some...motherfucking...master...of obvious social inquiries with DAMN drug deals, DAMN cocaine, GOT A family somewhere, someway or another...Alex being one of your damn relatives somehow, no idea, but give me back my...PlayStation Network accounts, yi motherfucking idiots. This really is a paaaain! It hurts, it hurts, because...the dang, dang 'ing is...so motherfucking heavy. I love PlayStation! I love PlayStation! Kill the Xbox! New reason why they call it the motherfucking 360. You look at it makes you turn around-- makes you do a 360 and walk away. Very appropriately called is a damn 120, 130 whatever, whatever the half of 360 is. [stops, then continues]

Hey hey, yeah yeah, I don't like your boyfriend. No way, no way. Girl, I think you need a new one. Hey hey, yeah yeah, girl, woman, I could be your boyfriend. 'Cause...I am damn straight. Uh, damn rumors on the Internet from damn trolls make a mockery outta me and everything I do. That's...drawn me down to...quit drawing 'cause I lost motherfucking inspiration. Uh, damn, Jack Thaddeus give me back my PlayStation Network accounts.