Chris's physical fitness has been questioned many times. When asked to make a video proving he can do thirty push-ups, this is what he provided. In the video, Chris is seen attempting to perform push-ups to Survivor's "Eye of the Tiger". Chris appears to be either ignorant to the proper form of a push-up or simply cannot perform one; he does not do a single rep in good form. If this were the military, a personal training session, or even an elementary school gym class, an official would say Chris has done 0 push-ups, not 30. Despite taking an arguably easier form of the push-up (his knees were touching the floor rather than keeping his body in a straight plank), Chris still becomes visibly fatigued only part-way through the video.

Not much else goes on in this video, though it should be noted that Chris's pair of plush breasts makes another cameo. 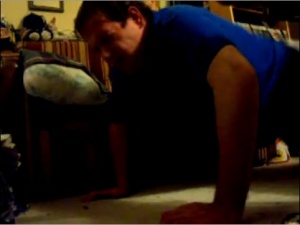 Chris suffers through his thirtieth failed attempt at a push-up.

0:05 - 0:36: Chris repeatedly does a pushup-like motion where his face is at least 18" off the floor at all times and his back is arched. His pelvis touches the floor several times. At 0:13, the opening guitar riff from "Eye of the Tiger" becomes audible.

0:37 - 0:43: Becoming exhausted after thirty seconds of an attempt at showing off his strength, Chris struggles under his own body weight, exhausted and consistently fails to perform a proper push-up. Nonetheless, he counts off how many "reps" he thinks he's done.

0:44 - 1:02: Chris moves his hands towards his distended, swollen belly. He moves his upper trunk off the ground, and then raises his hips, counting these as a "push-ups."

1:03 - 1:20: Chris groans and rests his weight on his forearms. He then repositions his hands near his breast and counts the next awkward thrusting motion as "twenty-four." He is no longer moving his hips off the ground, and is just raising his trunk up and down, painfully. His face appears contorted, as if in great discomfort.

1:21 - 1:29: His face contorted in an agonized grimace, Chris moves most of his body off the ground for the "29th" rep. However, those paying close attention can observe that his knees and feet are cleverly positioned out of the camera frame throughout the video. He pauses for a second or two before doing the last rep, visibly on his knees for this one. For some reason, his back shakes alarmingly as he counts off the "30th" rep. Still on his knees, he turns off the video camera.