He also got a haircut. Barb decided to go with the "elderly lesbian" look, as opposed to Chris's previous middle-aged manchild look. Also, notice Chris's profuse sweating. For his sake, we can only assume that he's trying his best to speak like a professional wrestler, even though he ends up sounding like Kermit the Frog with a sore throat.

The purpose of this video is vague, though it is likely that this video is an attempt to scare Clyde Cash, whom Chris thinks is scared of flexing and talking in a funny voice. 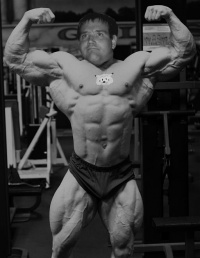 [Chris reaches away from the camera, as "Eye of the Tiger" begins to play. For several seconds, he flexes his jelly-like arms, grunting enthusiastically. He coughs briefly from the effort before launching into his rant]

[Chris points at the camera mockingly in the fashion of Hulk Hogan, a gesture he repeats throughout the video]

Dis battle is far from-this war is far from beyond over, Mister Clyyyyyde! You got nothin'!

[Chris holds out his fist, with the Amnyfest Ring, in a menacing gesture]

YOU GOT NOTHIN'! You are weak and very powerless! I am the strong one! I AM STROOOOONNNG! You back down! You... are a weakling! I AM THE STRONG, BUFF ONE! GRRRRR! ARRRRRRRGH!

[Chris returns to posing and loudly grunting until the video concludes. Chris moves to turn the camera off]