Thank You, Jeff, and I accept your apology. 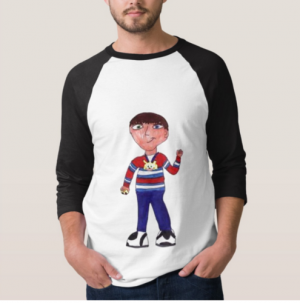 Thank You, Jeff, and I accept your apology. is a video uploaded by Chris on 20 November 2015. Here, Chris reads out a list unrealistic demands from Jeff, then reads Jeff's sarcastic apology, completely missing the sarcasm. Chris has been particularly concerned with the fact that Jeff has been selling unauthorized Sonichu merchandise on Zazzle, even though the items he references are being sold by several different merchants.

Hello and good day once again. This is Christine Weston Chandler coming to you live from home, and we have a final and good update from uh, Franc-, from Jeff, which might turn out for the better, at least I hope for his benefit. But aside from that, uh, I have uh, issued a short lis-, a short list of demands and con-, conditions, more I would prefer to use the word conditions because...anyway, yeah, just let this go after he’s met the conditions and I intend it well. 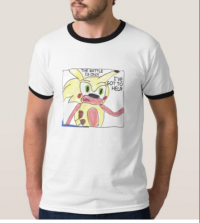 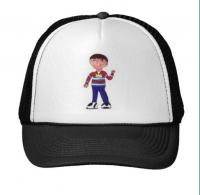 But anyway, let me read those out, um...I quote, um, “I’ll forgive you and move forward under the following conditions. Firstly, considering your income amount per year on the (air quotes) Sonichu gifts, and how many years your store has been up and running, I want you to send directly to me no less than $120,000. Second, as I am deciding on opening a Zazzle branch of Cwcville Shopping for apparel and such, such gifts, with the image-, imagery direct from me, uh, I want you to remove the following items from your shop, as they are most direct to my drawing style and original past content: the Sonichu belt buckles, Rosechu vest t-shirts, Sonichu Battle Ringer t-shirts, Sonichu ‘Time to Zap’ t-shirt, CWC [air quotes] ‘Manchild’ shirt, and the Chris trucker hat. Among which I will personally redo these items on my shop, and I want no reports or complaints from you or anyone else. Third, morally, I want you to personally contact each and every person you have introduced yourself to under my name, and inform ‘em all of your real legal name. I want you to come clean. And I want you to present each of them with references and links of my own Facebook and Etsy pages, validating and confirming who Christian/Christine Weston Chandler really is: me, not you. And finally, I want to assume lead director and main consultant on the CWC Adult Chronicles video game currently on the internet. I will personally play it through, clarify, verify, and clean up details of the story, plot, and everything within it. And upon accoming console release, I wanna sign all the papers and be heavily credited and everything.”

Alright, then I do the other final vers-, final thing of which--I’m just doing this here—um, so I’m do-, I’m reading this, so this is quoted from Jeff Oh-zoo-zoes hi-, uh...Ouzos. I try to say it right—Oh-zoos, Ooh-zohs, whichever vowel is silent in his last name. But anyway, mm, for, for all, everything legal and whatnot to access everything, uh, I am uploading this video personally, and publishing those statements. It’s important that they know exactly what they are coming from me and not any impostor, so that’s all good. And as I re-, and he wants me to read his apology, which I found to be very just...wow. It’s quite self-improvement upon him, I feel. And, I do not want this to be taken out of context from this original video. This is quoted from Jeff Ouzos himself.

“My apologies, Christine Weston Chandler, the official creator of Sonichu and Rosechu, the electric-hedgehog Pokemon. You win. I submit my total and unconditional surrender to you. When I saw your last video, your words cut me to the core. You exposed me for who I really am—just an impostor of a truly talented, one-of-a-kind, special, beloved across the internet, female author with the dedication to create more than eleven issues of the Sonichu comic and handmade merchandise. I was wrong to take your identity for my own personal financial and sexual gains. I did this because I am truly your greatest fan. You are the person that I always dreamed of being. You are a beautiful feminine soul and a famous artist. I am but a poor homeless loser with ass-burgers who roams the streets of Seattle looking for cheap drubs and an easy trib. I am nothing in comparison to who you are. I am sorry I impersonated you to so many women. They could usually figure it out after a while anyway. My breasts are not as full and transitioned as yours, and it brought quite a lot of disappointment when I finally got to second base with them. It was also increasingly obvious that I was not you because when I would eventually trib with them, it became clear that I had no experience in the bedroom, and even tried to use the wrong hole once. So many women who thought they were fulfilling their ultimate fantasy were duped by me. I also had trouble pulling off your look because I am balding and must wear a wig, and am forced to wear my mom’s old hand-me-downs. I will also be handing over to you the official certificate recognizing you as Seattle lesbian transgender community Member Of The Year, since I used your identity to win the award, and you are the one who really deserves it. I pray that you accept this title and honor. That goes hand-in-hand with the payment of $120,000 you requested from me. I will make that payment that payable as, to you as soon as possible. My sincerest, heartfelt apologies. I am trans-, transitioning back to Jeff, as I am not worthy to be the feminine spirit you are. Jeff.”

Just...wow. [pause] Well, I mean, I would ap-, I would, I greatly would appreciate and accept the title of lesbian transgender community member of the year, but I don’t live in Seattle. So instead, I would graciously allow it to be moved over to the first runner up in that...contest, since they live in Seattle. But if they can’t accept it, then...[pause] I would say second runner up. But if nobody’s available, then I will accept it fully.

Anyway, thank you, Jeff. I had considered you under bad adjectives, but it makes me feel better [removes glasses] to see you actually taking good actions on your own self-improvement, and better reflecting upon yourself, and I pray for your better improvement of your own life, and your own identities, and figuring yourself out and everything. All I can suggest is be yourself. Not anybody else. I’m sure aside from the, if you just act on good behavior and [video cuts off]