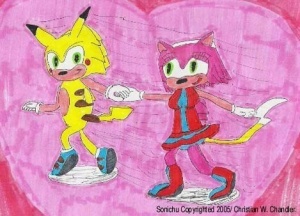 The Belt Buckle of Fail is a piece of Sonichu paraphernalia and a minor Relic of Fail. The belt buckle frames a drawing of Sonichu pulling Rosechu along behind him, overlaying a pink heart in the background. Chris made this particular drawing in 2005, and it is unknown what inspired him to make it into a belt buckle.

Although the Belt Buckle of Fail is not as flaunted or publicized as the Sonichu medallion, it is an example of how at one point, Chris could not resist putting Sonichu in everything, even on his resume.

The belt buckle is most easily visible in the "attraction images" he included on CWC's Cool Profile in 2005, in which he seems to go out of his way to show it off. The buckle allows him to highlight simultaneously his body, his belief in true heterosexual love, his creativity, and his masterwork Sonichu. It's also a key reason why many people assumed off the bat that he was a raging homo.

The buckle is hard to spot in Chris's videos because it is out of frame, or his shirt and/or gut is covering it up. He depicts himself wearing the buckle in various self-portraits through 2007, and it appears to be part of the standard wardrobe of Comic Chris through issue #10. However, Chris often draws it as a plain yellow rectangle due to size constraints, which is often the case in many comic books such as the Simpsons Comics.

Since becoming a transgender, Chris has ceased to wear the belt buckle, preferring skirts and dresses.