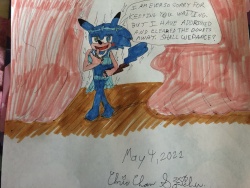 Negligee (from the French word for neglected, négligée), "negligent" in Chris Chan speech,[2] or the Lavender Lingerie of Fail, is a form of lingerie, transparent undergarments for women, consisting of a long sheer dressing gown intended for wear at night.[3] On some occasions, Chris would state having an interest in wearing negligee, or show a sort of fixation for wearing it.

The earliest instance of Chris shown to have a liking for negligee appears to be in a 4 May 2021 drawing of his Sonichu fursona wearing it while giving a seductive look and asking the viewer if they would like to dance. Chris would also confess his liking of negligee to The WCT on 10 July 2021, while also expressing his experience with his new "lady friend" while wearing it. He would refer to the act of having sex with the lady friend in negligee as being the "Final Boss in a Sexy Outfit", stating his salacious drawing of Chris Chan Sonichu to be a representation of his desire of wearing negligee. [2]

Chris would also take a photo of himself in negligee on 11 July, when showcasing commissioned art, his Tarot cards, as well as a drawing of an eagle directed at trolls. When complimented on how "nice" he looks, Chris replies by commenting how "comfortable" it feels on him, as well as how good it makes him look.[1] Likewise, in his chat with The WCT, Chris would also discuss how "So many years ago, I never really had thought I could look so damn sexy." [2]

Bella would state in a conversation she had with the Suitress that Chris's affair with his mother involved "Nipple clips on both, lingerie on both, 3 hour long massages, candle wax", likely in reference to Chris's fascination in negligee.[4] The veracity of this is dubious, given how Bella had also fabricated texts where Chris allegedly admits to performing BDSM-style sex on Barb.

On 17 April 2022, Larry Vaughn would claim in a Kiwi Farms post that "There was this random SoundCloud hip hop cracker who visited Chris literally a week or two before the incest leak, and he said that Chris smelled awful and was wearing a negligee. The watchmen had so little control over Chris...".[6]