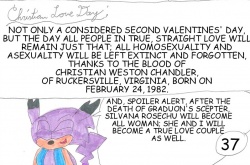 Magi-Chan describes Failmas, and expresses his severe disappointment with a startling lack of accuracy.

Christian Love Day, or the 24th of February, is a proposed holiday mused upon by Chris, also being his birthday. It was first mentioned in the CWC blog entry of 7 January 2010. On the same day, it made an appearance in Sonichu #10, in which it is celebrated for Magi-Chan using a vaccine based on Chris's blood to eradicate homosexuality.

Chris bases the holiday not only on his horrifically misguided and disturbing Gay Holocaust, but grants it full significance for being his birthday. Chris actually believes a milestone date in his amateur webcomic should be celebrated worldwide, because he "feels" like it should, especially since it "feels" like a holiday to him, neglecting that everyone tends to view their own birthday as a holiday. He attempts to mask this fact with ill-researched hear-say. The "forgettable" holiday occurring on the 24th is Mexican Flag Day, celebrated at most with a flag ceremony in elementary schools and maybe a short lecture on the history of the Mexican flag. This is notable for being both a minor, yet momentous holiday, doubly defeating Chris's point. On a historical note, it was the same day the Nazi Party was founded, way back in 1920, and the day the Russian invasion of Ukraine began in 2022, coinciding with Chris turning 40.

Interesting to note is the celebration of a "man"(child) giving his "blood" to "save" the population of the Earth from "damnation". Chris thinks he's Jesus. Big surprise. 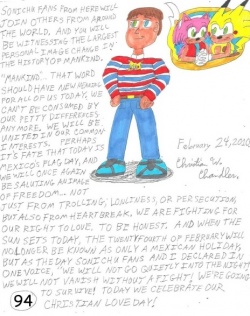 True and Original Declaration of the Christian Love Day. Note the buttocks Chris drew on his crotch.

Chris is so engrossed by the idea, that he went as far as making a video for the occasion, asking his army of fans to celebrate his hubris. To remove any doubt about the issue, he admitted to Alec Benson Leary that he does indeed believe he is important enough to have his birthday celebrated across the country. On the other side, he denies ever writing the declaration, claiming a friend did it for him, and says he saw the movie Independence Day only once.

As described in the events of the comics, on 24 February 2009 Magi-Chan completed his mission of distributing Chris's Gay Vaccine to the world, officially eradicating all homosexuality in a massive genocide. "Thanks to the blood of Christian Weston Chandler", all homosexuality and, in a startling display of overkill, asexuality are eradicated. Chris uses this as an excuse for a second Valentine's Day late in the month. Presumably, the day will be celebrated with unabashed, BUT STRAIGHT, monkey sex.