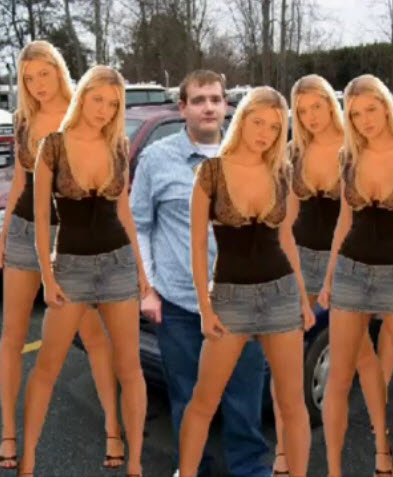 Boyfriend-free girl is a peculiar turn of phrase that Chris uses. Obviously, it refers to a girl who is single.

This is what Chris calls single white women. He wants one to make into a "Sweetheart from the Ground-Up".

Chris emphasizes the "boyfriend-free" part as nearly every girl he asks out has a boyfriend for some bizarre reason. One possible explanation is that a gal pal, hoping to kindly but firmly deter Chris from hitting on her, would claim she has a boyfriend, even if she doesn't. It seems that the very presence of Chris can cause a woman to spontaneously grow a boyfriend, or jerk. Also, the fact that "boy" is the first part of what he seeks may be perpetually thwarting his attempts to stay straight.

Chris also fears "gals" that have boyfriends, a condition he calls noviophobia. Whether he excludes "boyfriend-free girls" who are boyfriend-free for a reason from the usage is up to debate, however, it is likely that he either forgets that not all women are straight, or he believes that his manly charm can instantly turn women straight.

In late October 2009, Chris's standards took a step down yet again. Chris became infatuated with Liquid Chris's girlfriend Kacey, going so far as to say he loved her in a grainy YouTube video, where he did not sound the least bit desperate at all. Days later, Chris asked her out via YouTube, which is a totally mature and appropriate way for a 27-year-old man to ask a woman out on a date.

Although Chris has done disturbing things in the name of unrequited love before, and has previously been infatuated with a woman in a committed relationship, this was his first serious attempt to break up a couple for his own personal gain. To this end, he also created yet another video where he described himself as a popular, attractive, even-tempered individual who makes good choices and has a strong moral compass.

Click here if you wish to pursue becoming a girlfriend of Christian. You can also pay him for sex, too.