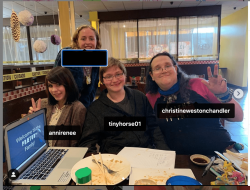 Three of the Praetor members, pictured with Chris. Not pictured is member owen_sundstrom.

Praetor (sometimes referred to as "The Praetors") is a group of edgy enablers who came in contact with Chris to produce and sell Sonichu-themed products with Chris's permission, giving him a cut of the profits in exchange. Most of Praetor's members live around Goochland, Virginia. In October 2020, photos were discovered of the group posing with Chris on Instagram. Although Praetor was "officially partnered" with Chris, things like how they began contact with Chris, or their true relation to him are unknown.

On 19 October 2020, the Praetor group posted their announcement of a collaboration with Chris onto Instagram and Twitter, showing Chris along with two girls and a guy, who are tagged on the account on Instagram. Chris also held a sermon with the audience being the Praetors at the Goochland public library, which Chris uploaded on 8 November 2020. A picture of a member of Praetor purchasing a stun gun and a Pikachu mask was posted on 15 November 2020, which Praetor later claimed to be promotion for sales of autographed tasers. In February 2021, Chris wished to borrow a taser from Praetor to tase his collection of quartz crystals to activate the Dimensional Merge (with Chris also considering using the taser on himself, an idea Praetor objected to out of concern for Chris's safety),[1] though Chris's taser plans seemingly fell through.

Praetor was a target of harassment by the Watchmen group, believed by them to be a group of Idea Guy-Esque trolls. Many rumors about the group were subsequently spread around by Watchmen leader Naught, Watchmen member MKRNightVee, Larry Vaughn, and Bella following the release of a clip of a call between Chris, Praetor leader Caden Peck, and many Watchmen members.

On 29 July 2021, a four-minute call, where Chris admitted to having sexual intercourse with his mother, was leaked. It was soon revealed that the caller was Praetor member Isabella Loretta Janke.

In Jail Letter - 18 January 2022, Chris mentioned that he wished to get back in contact with Praetor. Later that year, Praetor restocked their Etsy shop with new items, including art pieces Chris mailed to them from jail.

Caden Peck (tinyhorse01) is a co-founder and the leader of Praetor, as well as one of Chris's "business associates". According to Chris in the 2021 Jail Call, Caden is responsible for scanning his work to later publish. A few leaked DMs between Chris and Larry Vaughn also revealed plans to create a Discord server. Caden was also in charge of the Praetor accounts which had directly interacted with Chris.

He was also the sole Praetor member involved in the Taser Call, being accompanied by several Watchmen members like The WCT and MKR.

Chris stated in a 12 July 2021 chat that Caden was one of the people he had asked for help with getting together a posse for "sharing and protection" at Everfree Northwest, as Jacob Sockness had previously declared that he'd also attend the event.[3]

In a jail letter from July 2022, Chris claimed that Caden was helping him raise a $150,000 fundraiser so that he can go back home after he has been released from jail.[4] After Kenneth Engelhardt had criticized Caden's actions, Chris berated Kenneth, telling him that he shouldn't be "judging Caden in that vain[sic]".

Owen Sundstrom (owen_sundstrom) is a co-founder of Praetor, according to Larry Vaughn. Not much else is known about him other than him posing with Chris during a sermon about the Merge.

A blond woman pictured in the group photo posing with Chris. An Instagram tag was associated with the photo but was censored by the CWCki due to Praetor having mistagged the photo with an unrelated account. Watchmen members have also misidentified the woman as being Bella when Chris told Kyle about the animated intro she made for him.[citation needed]

Isabella Loretta Janke collaborated with Praetor to make the animated Chris-Chan Sonichu Introduction video, and had an unclear relationship with them going forward. Bella claims that she cut ties with them early in 2021.[6] Chris claimed in a jail letter that Bella was not an active participant in Praetor's sales, and that her primary contribution was her work on the animated intro.

On 11 December 2020, Chris advertised for their Etsy shop, linking to medallions produced by the group, explaining that he was currently unable to produce the medallions himself and so outsourced the production to Praetor, mentioning he would get a cut of the profits in exchange.[7] In February 2021, Chris mentioned he had been paid $400 out of $6,000 Praetor had made.[1]

The account on Etsy is also named Praetor, and they are the owner of OfficialCWCmart. As of 15 December, they have sold 151 medallions, and are considered a bestseller.[8]

Golden Church of Sonichu was a Discord server created by Praetor. Customers gained access to it after purchasing a Golden Sonichu medallion from their Etsy page. 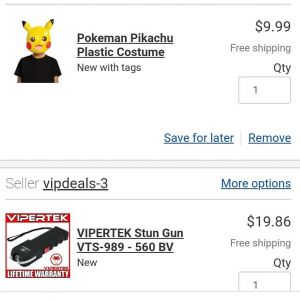 What do they plan to do with that taser?

On 15 November 2020, Praetor posted a screenshot of an online shopping service's shopping cart - in the cart was a Pikachu mask and a VIPERTEK VTS-989 560 BV stun gun. Praetor stated:

Praetor later claimed this was for promotion of sales of autographed tasers.

In February 2021, Chris stated that he wanted to borrow one of Praetor's tasers to stun his Gate Crystal and Celestial Key quartz crystals in an attempt to activate the Dimensional Merge.[10]

Watchmen leader Naught then created a vicious rumor, stating that Larry Vaughn was in on a plot with Praetor when he shared bits of a conversation that he had with Chris regarding his intention to shock his crystals.

In 2022, Praetor began selling tasers previously autographed by Chris on their Etsy shop, supposedly for the purpose of simulating "zapping to the extreme" for buyers. Those were posted with the following description:[11]

A post from their Golden Church of Sonichu server has them also promoting flamethrowers.

Despite being in Jail, Chris was still able to get in contact with Praetor members, allowing them to promote art and artifacts that he left for them.

In early May 2022, three different versions of Sonichu medallions were listed for sale on Praetor's Etsy shop. The medallions were apparently made prior to Chris's arrest and had been stored in an unknown rented location and at the Chandler residence until their listings. 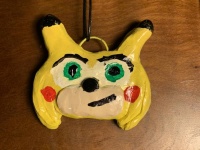 The Etsy medallion in question

Seemingly identical to the medallions sold during the first run of sales, these were not crafted by Chris. The price reflects this, as these were the cheapest of the group of medallions. Nevertheless, in an undated audio recording released alongside them, Chris referred to these medallions as legit and authentic.

In contrast to the regular medallions, these medallions were apparently made by Chris. The medallions are of a noticeably different style compared to their cheaper counterparts and are adorned with Chris's signature on the back, so their description may very well be truthful.

A handcrafted medallion was included with each purchase of "Golden Church of Sonichu Cult Robes." The robes came in two sizes. Red robes were large, while blue robes were extra large. No smaller sizes were offered, as "Golden Church members were assumed to be naturally, uh, large people."[12] A yellow mask with red Sonichu-style cheeks was also bundled with each robe.

The most expensive of the medallions, the megastone medallions were a variant of the handcrafted medallions. In addition to being signed by Chris, the back of the medallions contained a "megastone" which Chris verbally claimed to "have personally blessed and programmed each and every one of." As such, wearers could "really […] feel the spiritual aura and charge and vibrations within."

Chris created artwork during his stay in jail for incest. He sent the art to Praetor for them to sell on their Etsy page.