Chris demonstrates his meditation pose as he attempts to lift a fidget cube with his psychic powers.

Meditation is a spiritual technique typically used for stress relief, also being a key component of New Age spiritual practices such as astral projection and the third eye. Chris often uses it as a means to project into dimension C-197 (read: daydream about his fantasy world) – which is essentially the opposite of what it means to meditate.

For most of his life, Chris was not a fan of meditation – on his list of OkCupid answers given between 2009 and 2014, he answered that he "rarely" meditated. His interest in it was piqued during the latter half of the 2010s, a time in which he increasingly sought out magical thinking for solutions to the problems in his life. By August 2019, he was meditating "three to six hours per day".[2]

Chris practices a warped version of meditation as stress relief, confusing it with contemplation. Most people typically meditate by clearing their minds of thoughts; Chris, on the other hand, actively ponders over subjects, including ones that cause him stress. An example is from after he flipped out over ProjectSNT's redesign of one of his characters and couldn't grasp why it bothered him, stating "I'm still letting the Why question stew in my subconscious as I continue to meditate and continue onward until when the answer comes to me".[4] Additionally, while most people meditate in silence or put on relaxing music, Chris watches TV[1] or plays video games.[5] Oddly, he also considers working on his Dungeons and Dragons character sheet to be meditation.[6]

Chris's tendency for confirmation bias is amplified by his meditation/daydreaming sessions. Anything Chris envisions, he instantly considers to be fact. When Chris stewed over why he was bothered over ProjectSNT's Dungeons and Dragons-inspired redesign in his meditation session, his thoughts drifted into daydreaming over his god complex. As a result, he then believed that the reason he had been bothered was that the inhabitants of the Dungeons and Dragons dimension had used SNT's drawing as a signal to contact him for help, further fueling his god delusions.[8] 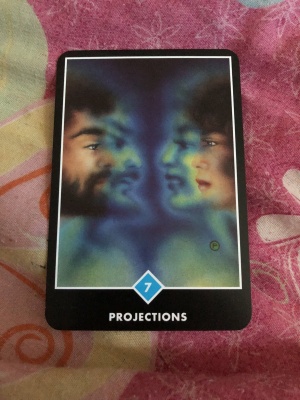 There are likely other illusions that block you all, individually and respectively as well: identify those illusions and dispel them for yourselves.

Astral projection is the belief that one can utilize meditation in order to separate the soul from the body and have it travel throughout the universe – a focused form of daydreaming. Chris latched onto the concept around fall 2017 as a means to visit his fantasy realms CWCville and later, C-197, and hang out with his imaginary friends.[9]

Occasionally, Chris envisions new imaginary friends while astral projecting and immediately incorporates them into his burgeoning collection of OCs, such as Gary Stu and Lightning Quartz, OCs based on My Little Pony.[10][11]

Chris had also claimed in several Jail letters that he possesses the ability to astrally project, and connect with other people from long distances. For example, one such letter has Chris claiming that he was able to astrally project to connect with the Suitress from afar, in order to "heal" her and "help" her with a perceived emotional low of her's.

A later letter has Chris going into detail about how he thinks he achieves this. He claims that this involves converting his energy into a form only tangible on the 1C-211987 Earth. The same letter also mentions how very few people besides him has the inate ability to astral project. According to Chris, most who have attempted this merely wind up unconsious. Unlike this majority, Chris claims that the few that can pull this off effectively have "Backup souls". In order to work around this, Chris claims that one must back up their memories for storage, which can be then be placed into these Backup Souls.

The third eye is another concept from New Age spirituality tied to meditation, associated with mental visions and precognition. Chris latched onto it as well around summer 2017,[12] using the concept to describe his daydreams of his imaginary friends, believing that he was really communicating with them.[13]

When discussing his fantasies over Twitter, Chris often omits that he uses techniques such as astral projection and the third eye, instead simply insisting his visions are legitimate, giving many fans the impression that he developed schizophrenia.

Chris considers sitting around for hours on end daydreaming to be a key part of his job as a Goddess, using terms such as "work"[1] and "commute"[14] to describe his meditation sessions.