This page is an archive of Chris's major social media posts during August 2019. Posts are sorted by date. Notable comments are included and color-coded for reference. Chris's usual posts are in blue. Halfway through the month, Chris would begin role-playing as Magi-Chan; those posts are in purple.

On the road again

Chris at the BronyCon Gala

Chris had a great time at BronyCon

[AN: I got no idea who any of these people are]

Chris is happy about how BronyCon went

In response to a fan art piece of various Sonichu OCs (pictured below.) 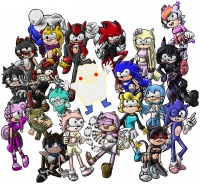 Chris Responds to some fan art with Sonichu info

[In response to some Rosechu fanart]

[AN: Green is a color generally associated with greed, avarice and envy. Take that how you will.]

In response to a commenter noticing the dearth of images and large amount of text:

Chris Agrees that no national dex is no big deal

Chris is all in on Healing Crystals

Chris gets a new cat

Chris reacts to another Brony Sexpervert

11 August [In addition to this response]

"Magi-Chan" says he has entered our world

[AN: From this point onward Magi-Chan becomes very active.]

"Magi-Chan" uses his sock powers to ask to be unblocked

[In response to the earlier statement about untagging people on Twitter]

A rant from Magi-Chan about the TF2 Crew

Magi-Chan makes his own cards

In response to a Twitter user calling Magi-Chan narcissistic

Magi-Chan begs for a game

Chris and Magi-Chan are luminaries

"Magi-Chan" explains how he got into this world

In response to someone asking if Chris's gender is the same

Magi-chan quotes a nutjob to prove a point

[NB - Spirit Science is a rather notorious New Age 'educational' YouTube channel from Canada. Among its other TRUE and HONEST claims of similar calibre to this are that Jews are aliens from the future and that extra chromosomes result in gigantism and psychic powers.]

Magi-chan's response to concerns about Spirit Science's legitimacy and pointing out that he is a complete nutjob:

In response to a Twitter user asking if we're all OCs

Barb is not dead

Beauty of the Merge

Chris and Magi-Chan are two different souls and beings

[AN: First mention of the polyamorous marriage in a hot minute.]

In response to a Twitter user calling Magi-Chan a murderer

In response to BronyCon posting their photo album:

Magi-Chan's word of the day

Equestria and earth are neighbors apparently

Christopher and Christian nonsense as explained by Magi-Chan

{{quoteboxpurple|would have more likely realized, understood, accepted and come out as Bisexual and Transwoman a lot sooner.

A Little Mouse With a Little Bow (@archer_mouse)

In response to a Twitter user claiming that Chris had allegedly defended pedophiles, citing these earlier tweets as evidence

The Idea Guys' nonsense was meant to be

Magi-Chan reposts a statement on discord

[AN: Of note is that Chris uses Discord's light theme (generally regarded as inferior to the dark theme. Also of note is this rant is completely off topic to what the channel is supposed to be.]

29 August, in response to Sockness:

Sonichu and Rosechu play a TCG

In response to a Twitter user asking if Magi-Chan could take pictures of Chris's new cat, Possie

Appreciators of the arts

In response to multiple now-deleted tweets inquiring about Sonichu medallions

In response to a series of now-deleted tweets