Spirit possession is the belief that spirits can possess a person's body. Chris believes he has experienced possession by his imaginary friends. He has increasingly used it as a maladaptive coping mechanism to avoid reality and criticism, such as when he began to role-play as Sonichu as part of an elaborate fantasy to cope with being unable to attend the real-world BABScon, or when he role-played as Mewtwo to defend himself from criticism levied by a Twitter troll. This practice has been colloquially referred to as LARPing, short for live-action roleplaying, after the real-life practice. 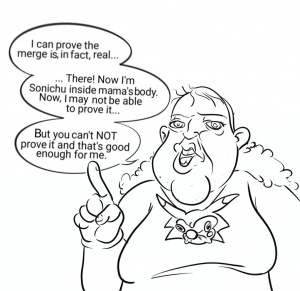 Chris uses spirit possession as a means of validating his belief in the Dimensional Merge.

When Chris believes he has swapped spirits with an imaginary friend, he role-plays as that persona. While doing so, Chris refers to himself in third person. In calls and videos he (tries to) change his voice and vocabulary, but usually fails. In a later video, he made the excuse that "When you possess somebody else's body, you gotta work within their vocabulary and their limitations, and whatever."[3]

While role‐playing, Chris says things that would sound very weird from "Chris's" mouth. While roleplaying as Magi‑chan, for example, he called Barb a guilty pleasure waifu. He might say this to prove that he is no longer Chris, as he would never say such a thing… right?

During Chris's phase of role-playing that he is possessed by the spirit of Sonichu, he (as Sonichu) refers to both Chris's spirit and physical body as "Mama," as both an allusion to how Sonichu referred to Chris as Father in the comics and to reflect Chris's transgender status. 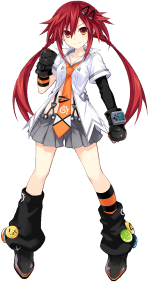 Uzume Tennouboshi, also known as Orange Heart, is a Console Patron Unit (CPU) in Megadimension Neptunia VII. She represents the Sega Dreamcast, and so far, she is the only female character that Chris has ever LARPed as.

On 8 November 2017, Chris was brainwashed by an Idea Guy into believing that he was sharing his body with the spirit of Uzume.[4] John Yamada, an alias used by one of the Idea Guys, texted Chris and crafted a role-play scenario in which Chris's Sega Dreamcast was the portal that could connect Chris to his imaginary safe space CWCville.[5] Guided by suggestibility, Chris subconsciously filled in the role-play scenario further, believing that Magi-chan teleported to the real world, scanned the Dreamcast, and confirmed there was a powerful force inside the console. Chris left the console on for 24 hours to "charge" it, and then touched it, getting shocked, and interpreted this as him pulling out Uzume, a fictional character, into his body. Chris claimed Uzume can control his body and speak through him with her own voice.

On 13 November, he retconned his delusion, saying that he had not been sharing his body with Uzume, but a clone of her named "Orange Spiral Seal," also mentioning a battle against fellow Neptunia character Kurome. He no longer has the voice of Uzume in his head, but still retains "the powers of the four main Goddesses, as well as [his] own powers."[6]

Chris temporarily resumed the Magi-Chan roleplay during an October 2019 conversation with the Watchmen.[9] 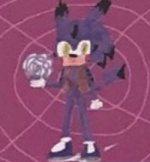 On 26 November 2019, Chris discussed his belief that he had body-swapped with Tri Sonichu (an OC and recolor of Magi-Chan, created by MKRNightVee), in order to work on the Dimensional Merge, and that he ended the body-swap after boosting Tri's abilities and making him overpowered[10].

From 15 April 2020 to 25 February 2021, Chris believed he had body-swapped with Sonichu. He also believes it began earlier, retconning a beginning date of 31 March 2020, which conflicts with him not yet being in Sonichu's character in the 10 April 2020 Red vs Blue Reaction Livestreams video.

Chris initiated the body swap as part of an elaborate maladaptive coping method for missing out on the BABSCon convention[11] which had been cancelled due to COVID-19. Using Sonichu as a mouthpiece, Chris claimed he was able to visit BABscon in C-197, which presumably avoided the pandemic, much like World War II.[12] Chris continued acting out the role of Sonichu while he was featured as a guest on Chris Chan & Max Mandu LIVE / Leftovers Tonight and continued to act as Sonichu all the way through February, with only brief interruptions when he pretended to be Mewtwo and himself from another dimension (detailed below).

An enabler by the name of KwaiiSandbag reached out to Chris early in 2021, having been inspired to do so after contacting Chris following a binge-watch of Chris Chan: A Comprehensive History. By claiming that that he was a psychic, he told Chris that he could help reverse the body-swap process in a series of calls. Chris finally stopped roleplaying as Sonichu on the 25th of February 2021, immediately following news about My Little Pony G5; he heralded his 'return' by continuing to ramble about the Dimensional Merge and bash the G5 cartoon.[13]

On 14 May 2020, to defend himself from a Twitter troll who cast doubt on Chris's claim to be leading the Dimensional Merge, Chris paused his role-playing of Sonichu to role-play instead as his imaginary husband Mewtwo. "Mewtwo" took to Twitter to lambast and threaten the troll.[14]

Randy Stair was a mentally disturbed YouTuber who went on a killing spree in June 2017 before killing himself. Chris learned about and took an interest in him after viewing a YouTube documentary by The WCT.

On 6 November 2020, Chris believed he channeled the spirit of Stair possessing his transgender Ghostsona Andrew Blaze, recording an audio file to "help her get a post-death message out."[15]

Chris began role-playing as Jesus Christ during his stay in jail for incest.[16]

Other versions of Chris

As an excuse to break his Sonichu roleplay, Chris pretended to be himself from another dimension to answer a short Q&A session on 27 August 2020.

Chris channeled his past self in June 2021,[18] after he had begun reading chapter 5 of Warhol / Chris Chan, in order to consult with his inner child and search for unresolved issues.[19]