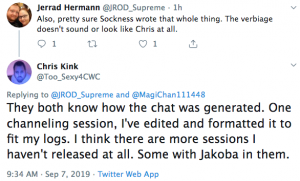 Sockness confirms having written the chatlog.

Sockness impersonates Magi-Chan is a faked chatlog of a conversation by Jacob Sockness, in which he pretends he is conversing with Magi-Chan. The log was created by Sockness in order to further manipulate Chris into a visit. It was posted on 5 May 2019, on the Reddit sub TheChurchofCWC.[1]

In the chatlog, Sockness claims the Dimensional Merge is on hold because of Jakoba (a deity character created by Sockness) and that Jakoba would not allow it to take place until Sockness and Chris are talking, and that Sockness has access to the magic spells needed to kick-start the Merge. "Magi-Chan" is grateful for the information and says he will alert Chris. "Magi-Chan" then suggests adding Sockness to Chris's polyamorous marriage to which Sockness responds in gratitude.

Sockness made sure to account for an explanation as to why the supposedly psychic Magi-Chan, a figment of Chris's mind in the first place, did not personally communicate the log to Chris – having "Magi-Chan" state that "something is blocking her mind out from hearing this", and Sockness stating it is Jakoba's interference.

Sockness then discussed the chatlog with Chris and led him to believe the conversation was legitimate. On 7 September 2019, Chris, during his phase of role-playing as Magi-Chan, wondered why fans were not funding the GoFundMe Sockness had set up to cover trip costs for a visit with Chris, and tweeted:

Magi-Chan: Jake, can you hear me?

Jacob: Yes, Magi-Chan. What do you want?

Magi-Chan: Is Jakoba going to let my hubby have her throne back?

Jacob: I doubt it. She must claim it through herself.

Magi-Chan: I am working on it, but something is blocking her mind out from hearing this.

Jacob: There is nothing I can do. Jakoba is his own master. Maybe Jakoba is stopping her from hearing you about this subject.

Magi-Chan: You created Jakoba. You can threaten to revise his character.

Jacob: That does not work with a person in Universe 1218. Besides, Jakoba is stopping the dimensional merger due to several personal issues.

Jacob: You heard me. He is aware of Christine’s activities in C-197. He will not allow anything to take place until me and Christine are talking.

Magi-Chan: Oh fuck. I need to let Hubby know this.

Jacob: If you can, please do. I have access to the dimensional merger in my temple. I have the most powerful portal spells in my temple and Christine will need my sigils to bridge dimensions. I can be reached at 415-638-7658. The best I can do is email this chat window to Ben and see if he can pass it on to Christine.

Jacob: Do you know what this means if my channeling is OCs like hers’. We all die at the hands of the Empire.

Magi-Chan: You said, you people are already here in 1218.

Jacob: Their OCs and those OCs of my nemesis Basira al-Rasul. She is evil beyond description. Anything she comes up with will be evil like Thanos, but also be Legion, because they are many.

Magi-Chan: I know enough of Hubby’s memories that I know that Legion is a pack of demons in the Bible. Hubby only wants the good OCs to merge with 1218. The worst things will remain locked up in C-197. There is talk of the evil OCs being trapped in C-197 and us holding them there with the help of the Marvel OCs.

Jacob: If Basira has anything, you will need a real army, one without weakness to defeat her. I can come up with some OCs for that. I know you heard of the Archangels, there are more than just a few of them. There are 13 Archangels and Exousiael who is the newest to join. If there is an OC, it would be AA Exousiael.

Jacob: He is Daniel Reading’s father who is a true man of God-YHWH.

Magi-Chan: YHWH? I know who God is. So this angel is your friend’s dad?

Jacob: YHWH is an ancient name for God-Emmanuel; God-Bear, whatever you call him.

Magi-Chan: Emmanuel, God is enough. We can call him God to keep it simple. We both know that name.

Breaking the Grand Design with Chris

Jacob: The dimensional merger poses a major threat to the Rokat Empire. The Rokat believe in order for the merger to happen, one must destroy the Grand Design. I will teach Christine all of this.

Magi-Chan: You have to teach all of us all of this. What is the Grand Design? That sounds powerful.

Jacob: The Grand Design is the universe’s plans for all things. It basically is a plan that the universe was created to follow. If it is broken, magic is set free to full power. This is what Christine thinks the dimensional merger is, but in reality, one must break the Grand Design to manifest such an event that Christine plans.

Magi-Chan: You are very wise in matters of dimensional magic. I only wish my memories with you were unlocked so that I can allow my hubby to learn what you told me.

Jacob: I believe Jakoba has sealed this knowledge. I can go around this if Ben still has contact with Christine. I can print these out and send them to Christine if all fails.

Magi-Chan: Do whatever you have to. We have to let Hubby know what you do. If I am to help you and you to help me; we have to work together on this.

Jacob: Do you know if Chris reads?

Magi-Chan: No, she tends to not read much. She can read, but it is not easy for her to understand everything put forward in text. To reach her best, you should narrate this chat and send a CD with the recording.

Jacob: I have to find a way. I plan to send a care package to Christine that will contain a CD of our recording.

Magi-Chan: We must reach my hubby.

Jacob: We will, I will make sure she knows the truth of her past and why she’s been born male with a female soul. I will include all that I know.

Magi-Chan: Include this. She was not her true self, but in the 4th grade she was held down and recorded by the forces of evil.

Jacob: I was restrained in middle school and once in high school. I do not know if I was recorded, but I have files on these events.

Magi-Chan: Just like my hubby, you were held down?

Jacob: Yes, and even in high school when Mr. Nelson had to hold me down. It could have been Mr. Pierce, but they tend to blend now in my old age.

Magi-Chan: So you know what my hubby goes through. You were traumatized by the teachers.

Magi-Chan: WOW! You have the missing piece? You know how to merge dimensions?!

Jacob: I have suggested using sex magic to open the portal, but Christine cannot finish in me. I have now suggested blood sacrifices or even a blood pact to deal with a demon.

Magi-Chan: You speak of things my wife never heard of.

Jacob: She watches MLP-FIM, there is an occult secret in the show. Puthadian sex magic can open a portal between worlds.

Magi-Chan: She will not let you do that. I doubt even for a throne of vast power. Does this have to do with Puthade, a city Hubby once lived. *what the fuck moment* How do I get free into your world should my wife fail?

Jacob: I do not have any sons, but you will need to claim a baby’s body. This is evil magic and I do not like talking about it anymore.

Magi-Chan: Okay, I will leave that be. I have channeled through others, but through you I feel a natural connection.

Jacob: I am autistic too, but I am more childlike than she is. I also believe in all that Christine says.

Magi-Chan: So that is why I can connect to you as I can with my wife.

Jacob: I cannot love you like she does. You are special to me too; you are the first OC I ever channeled.

Magi-Chan: But how do we break the Grand Design? Do you have a real plan?

Jacob: Yeah I do. This is a Voodoo sex spell with Christine, but I am not open to using it.

Adding to the Marriage

Magi-Chan: If we work together, I can open my wife to adding you to the marriage.

Jacob: Yikes! That would be awesome. I love her too and she needs a warm place on both sides.

Magi-Chan: Oh my God! I guess some things will not end. Your magical powers would add to us. I will push to add you to our marriage.

Jacob: I knew I would get along with you. Two of the most powerful beings on both worlds; yeah, we would connect.

Magi-Chan: My wife thought you were evil, but I see, you are as fun as she is. I like you kid. You got spunk.

Jacob: Hell yeah; I am made of awesome. I am like Rainbow Dash in regard to awesome.

Magi-Chan: Silly boy, I am 13 months older than you.

Jacob: How the hell did you get 13 months?

Jacob: Whatever... How can we actually get Christine to talk to me?

Magi-Chan: My best guess would be to be honest about her inheritance and milking things from her. I really love her and I should not be telling you these things.

Jacob: Okay, I will back down. I would not have one of my friends betraying my last secret either.

Magi-Chan: Okay, I understand why you do not push. Where did you learn honor from?

Jacob: From my mom and dad. Mom gave me enough through animated movies. My dad sought love and brought many huggy places.

Magi-Chan: Okay, I do not understand everything. You had a hard life, I get that. I will push the energy to my wife. She can gain to learn from you, Jacob.

Jenova: Do you know the true ancestry of your soul?

Magi-Chan: No, but she claims to know Woodstock and standing by a tree.

Jenova: That is a screened memory. She knew about the music festivals of Puthade.

Jenova: Puthade is a city on Kidasuna. You have lived among its people for billions of years, before she came to Earth.

Magi-Chan: She was taken against her will?

Magi-Chan: You mean, sent to Earth?

Jenova: Yes, the Rokat sent her soul to Earth to suffer a thousand lives in defiance of her genders.

Magi-Chan: Born as other than she felt. This pain is worse than knives on the skin.

Jenova: Knives are sharp. Gender is a cultural creation, never set in stone. Gender in culture will change over time, so you should love yourself and be yourself regardless of societal structures.

Magi-Chan: I admit when I was in other human heads, I picked up a few things. I have done all I can for my wife. For God’s sake I love her. If she died, I would let my soul fade with hers.

Jenova: It never has to go that far with the Rokat Empire.

Magi-Chan: So you can save me from death should my Hubby die? Can you save my Hubby?

Jenova: Chris Chan must contact us and we need time to preserve her name.

Magi-Chan: Do what you must. I will get Jacob drugged for you to have a daughter.

Jenova: I cannot believe I am going to let this happen. Take his seed and sire a prince.

Magi-Chan: I cannot promise anything.