#BlockTheTrolls is a hashtag campaign Chris followed on 28 August 2017 as a means of rallying his followers to combat the trolls. Chris started following this hashtag due to how his interactions with the Planet Dolan staff, several MLP Voice Actresses and internet celebrities resulted in large amounts of attacks from weens.

After Chris commented on Nowacking's tweets about online dating[1], a swarm of weens spammed both of their Twitter feeds with accusations against Chris, insinuating or outright calling him a stalker/harasser of women.

Nowacking then blocked him without comment. Chris made several tweets regarding how the trolls have made him feel off, due to how all of the people he's contacted on Twitter have supposedly blocked him and cut off all contact with him purely because of the trolls, rather than accounting for his own lack of social graces.

Expecting his followers to offer their loyalty to him, Chris created two biased Twitter polls, disregarding the first one after he was unsatisfied with its results, asking people to vote for the most detrimental party: the trolls or Chris the "victim". 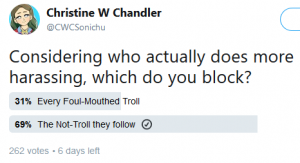 The first poll and its results, shortly before Chris deleted it.

For the second poll, the result was an overwhelming 80% of 2,501 votes to block Chris. 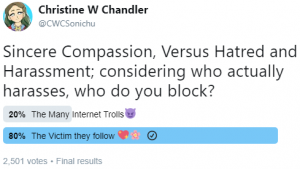 The people have spoken.

Chris then tried to write a poorly made speech in a wall of tweets.

On 3 September 2017, Chris announced that he had unblocked all the trolls on Twitter.

He has proceeded to use both his regular Twitter account and his NightStar2891 account to defend himself against weens responding to his tweets and sending him fan art.