An Etsy customer gambled that Chris would deliver and lost, still bitter over it three years later.

Etsy is an online marketplace for handmade, vintage, and craft items and supplies. On 29 August 2015, Chris created an account to sell his wares, ending a long and turbulent tenure as an eBay seller. Chris spent about one year selling his arts and crafts on eBay, but was never satisfied with the arrangement. eBay frequently took items down, sometimes due to trolls, but more often due to Chris violating the site policy (over and over, in the same way every time). His habits likely caught up with him, because on 8 June 2016, Chris's Etsy seller account was closed.

In 2021, the group Praetor partnered with Chris, opening a shop owned by Praetor, with products created by the group with Chris's approval. 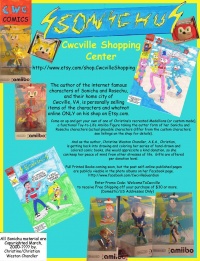 He's probably passing these out at Impulse too.

On 2 September 2015, Chris announced that he was winding down his business on eBay and relocating to Etsy:

The following day he made a Facebook note announcing the switch, and a week later he revealed a flyer for the shop. True and Honest Fans have since found the flyer taped to a bathroom wall in Charlottesville, and had it mailed to a business in Richmond.[1][2]

Chris's Etsy shop, which opened for business on 2 September, was named "Cwcville Shopping," subheaded "Cwcville Shopping Center." The tagline was, "Christine Weston Chandler's Shop for Items and Creations Straight from the Creator of Sonichu, Rosechu, and the City of Cwcville, Va." 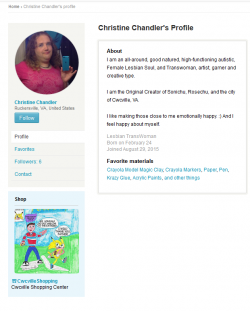 I like making those close to me emotionally happy. :) And I feel happy about myself.

By the time Chris left eBay, he was being allowed to sell only one item at a time per his two accounts, due to him constantly breaking site rules. Etsy provided a fresh start, and allowed him to sell as much as he wanted. The medallions, autographed photos, and commissions appeared immediately, and the Sonichu Amiibo soon followed. For some reason he chose not to offer any more original drawings for sale, probably because commission work was more reliable. The product descriptions were largely copied from those on eBay, including instructions regarding "bidding," even though Etsy is a strictly a buy-it-now market. He got the sample photos for his commissions straight from this very wiki.

Autographed paperback copies of Sonichu 0 through 4 were also for sale, made by Lulu. Sonichu 1 became available only after the most recent revisions introducing Ren Skysoar were made, suggesting that someone persuaded him he'd need to make less use of Sega's copyrighted characters.

Eager fans quickly shelled out money for all these items.

An archive of the Donate page can be seen here.

Not long after listing this, something rather unprecedented happened. A YouTube reviewer named DStecks gave Chris $1,000 towards the continued production of Sonichu.

Subsequently, Chris edited the price to "$10.00+" and the description to include more options:

However, the donation eventually ended up for naught, as Chris soon abandoned Sonichu 11 late next month, making only 16 out of the promised 100 pages.

This listing is a continuation of an offer from 22 December 2015, when he made $50 for a video holiday greeting! to announce that anyone paying $50 through the Donate listing would receive a video.

On 19 October, Chris began to make updates to his shop, consisting of captioned photos tagged to particular items.

In March 2016, Chris bought a PS4. The new life upgrade proved too distracting, as he ignored Etsy orders, often for months.

People who paid him $50 for a video greeting would be told by Chris mid-video that he hoped the video wouldn't be late.[3][4]

Despite that, many people were willing to give Chris slack, and often waited months for him to deliver, before giving up and seeking refunds through Paypal.[5][6][7]

On 8 June 2016, a Kiwi Farms user noticed that Chris's Etsy shop had been replaced with an error message[8]. Days later, on 11 June 2016, Chris announced in a video that the shop was "on vacation."

Chris claimed that he needed to catch up on orders. Given Chris's track record with personal responsibility, it's also likely that Etsy shut down the shop after numerous failures by Chris to deliver orders due to his stressful lifestyle.

In December 2020, Chris announced that he was partnering with Praetor to sell medallions on Etsy, and with that he was back in business. This time around, the account (named OfficialCWCmart) was not under Chris's administration. Instead, it is owned by Praetor, a group of minor enablers who were closely affiliated with Chris, and have an agreement to split profits with him.

Praetor handled production and shipment of the medallions and management of the Etsy shop, while Chris gave approved of the medallions, allowed usage of his OCs and occasionally advertised for the Etsy shop. As such, the bulk of the profits went to Praetor - figures cited in February 2021 were $400 for Chris and $6,000 for Praetor (though it is unclear if the $6,000 refers to revenue or profit).[9]

On 3 February 2021, the initial run of Sonichu medallions was released on Praetor's shop.[10]

The medallions are of a much worse quality than those produced only by Chris, and have received backlash from weens and concerned fans. Chris told them to count their blessings and assured them they will be of high quality, despite the page selling the medallions stating that "these are hand done, and will therefore reflect the "Chris Chan Style." Expect defects, burns, and a general lapse in quality."

On 15 April 2021, Praetor and Chris offered a package of meditation crystals and enchanted rocks from 14 Branchland Court's driveway for $45.[12][13]

On 29 May 2021, the price of the rocks and crystals were lowered to $20. The description of the listing was also updated to say that one buyer would supposedly get a free book about Chris and Andy Warhol.