Women Only Need Apply - No STD's

The YouTube channel where the video likely originated is here. The channel was created on 19 June 2016, meaning that Chris decided to become a prostitute on Father's Day. As far as we know, nobody approached Chris with money for sex, much like Chris's previous attempt under his Carlos Chantor persona.

The original upload appeared to be stretched from its original 9:16 aspect ratio (which any 16:9 phone uses when recording in vertical mode) to 4:3, giving the video a distorted, stretched look. It was deleted from YouTube. 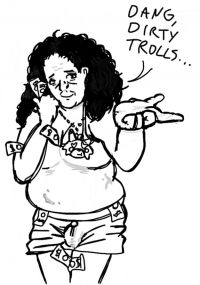 Artist's depiction of the alter ego

A corrected version of the video can be seen below, while the original version can be found here.

[jump cut] And I have... lots of hidden potential. So send an e-mail, [grabs body pillow] I'll give you a response. Tell me one little lovely, sexy evening... [winks again] with Miss Stephanie Bustcakes. Advice to the e-mail only, nobody with STDs, and only women of any orientation need apply. Well, straight lesbian and bi. All y'all got b- all y'all got the pussy! I'm very happy to work... [flips over, slaps backside, and says something unintelligible] and maybe show off my booty! [rolls over again and rubs ass] That booty look good enough for ya? [silently wriggles his ass around] So, respond now. [winks and turns off camera]

Text at the end of the video: