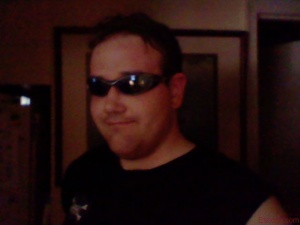 "Experienced for Her Pleasure."

Carlos Chantor was Chris's alias during his short-lived career as a male escort.

Chris came up with the alias after his first break up with his sweetheart Jackie. He tried joining with Charlottesville's "Naughty and Nice" escort services, but after being told that there was no market for bent, autistic virgins with rage, he made a profile (now deleted) at Escorts.com, apparently unaware that most male prostitutes belong to a rather rough trade. Interestingly, on the Escort.com profile Chris checked that he was comfortable with every fetish available (except the ones he found too homosexual). After a certain prank call inquired about watersports, however, he quickly reverted his decision and removed watersports as a fetish. He also distributed cards promoting himself as an escort around Charlottesville. This shows once again that Chris does not care about sex as an act between two lovers, but rather, he sees it as a way to lose his virginity, as well as to get a quick buck.

No one has taken Chris up on his offer.

It should be noted that during this stint, Chris's physical appearance was about as good as it could ever be. His hair appeared to temporarily stop thinning and wasting, his skin wasn't greasy and covered in dirt, and he even looked a bit thinner thanks to the slimming power of the color black. However, once the stint ended, old habits quickly returned.

Experienced for Her Pleasure.

Hey, Ladies. I am a cool dude to hang with, and I can make you feel good emotionally and show you a fun time. I enjoy a lot of things; I'll let you know when it's going too far. Give me a call to hook up (434 area code only). 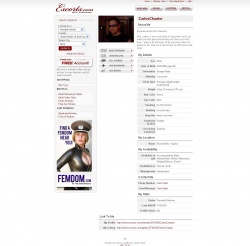