Patti Chandler (17 March 1988 - 27 June 2006) was Chris's childhood dog, a Beagle-spitz mix who was put down in 2006.[1] As can be seen in Patti's eulogy below, Chris reports that her birthdate was 17 March 1988. It should be noted though that in an email Chris sent to The Wallflower on 28 February 2010, he wrote that he learned what Patti's birthdate was after a veterinarian determined it for him.[2] It is doubtful that a veterinarian can determine the precise date in which a dog was born, making the birth date Chris reports as dubious. If it's even roughly accurate though, Patti lived a very long life for a dog.

As Chris tells in Patti's eulogy, he picked her up as a puppy from a litter at the house of his Aunt Corrina. On September 1992, Chris and Bob moved from Ruckersville to Chesterfield County.[3] This led to him being separated from Patti for 3 years, as Barbara did not accompany her husband and son, but rather stayed in the Chandlers old home along with the pets. Only in early 1996 did Barbara move to Chesterfield along with Patti and the rest of the family's pets.[4][5]

Chris brought Patti back to life in Sonichu 6 as Patti-Chan (a character created by Megan Schroeder to help Chris cope with the loss of his beloved pet), where she somehow gained the ability to walk, talk, and apply for welfare in CWCville. Patti is allowed no rest, as her soul remains in Chris's fantasy world, alongside an anthropomorphized version of Snoopy when that animal died over a decade and a half later. According to a video from January 2010, Patti now feasts on human souls. While this may seem to be at odds with the canon of the Sonichu comics, it makes perfect sense if you consider the distinct possibility that CWCville is Hell.

There is not a single known picture of Patti indoors, suggesting that she was just left in her pen in the backyard all the time. According to Chris, her wood-and-plastic doghouse weighed between "5-10 tons".[1] While a normal person might say something like that figuratively to represent the emotional weight it would take to move the home of a deceased pet for the last time, Chris seems to honestly believe that's how much it weighs.

When confronted about his insensitivity, or when someone tries to point out that he has never experienced any substantial hardships, Chris is quick to point out that he experienced the loss of Patti.[1] Indeed, Patti seems to be the pet that Chris was closest to, being one of the only living things that he truly loved beyond a sense of obligation, and Borb more or less alienated the rest of Chris's family from him while hiring friends for him in school, so it makes sense that he'd point to Patti's passing as a traumatic experience. 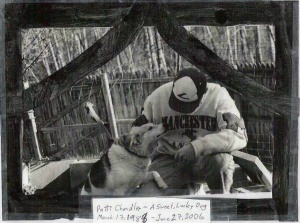 
But we all must move on with our lives with our beloved lucky mutt in our hearts and in our memories. So, Patti, may your old dog house and surrounding flowers forever memorialize your blessed heart, your barks at the stars and strangers, and your loyal love that you have blessed upon me and my family and friends. Bark on, and rest in peace, our beloved lucky Patti.[6]

Depressingly, it's also possible that the poor animal died in confusion and panic instead of peace and comfort after Chris left the room, given that her barking (presuming that it happened and that Chris didn't dramatize it for the purpose of the eulogy) could have been a reaction to Chris leaving her side in her final moments. While it's understandable that Chris couldn't bear to go through with it, Chris leaving the room may have put Patti in a state of shock as she was put to sleep.

Not content with an eternity of biscuit bones and "bally-scratches" in doggy heaven, Patti has apparently taken time out of being dead to assure her former master of her peaceful afterlife in a dream. Also, Chris has averred that her vengeful spirit will seek out Alec Benson Leary and his cohorts for allegedly besmirching her memory and proceed to, in no particular order, give them nightmares, consume their souls and kill them. Yet, as always, Chris still thinks of himself as a kindhearted, Christian individual.

Patti's physical remains rest underneath her 10-ton doghouse in the Chandlers' backyard. The notion of exhuming and desecrating her bones has become a popular running joke among trolls, to the point that Chris, in a September 2010 YouTube video, took the time to fiercely deny any rumors that the corpse of his dog was anywhere except where he had buried it.

Ironically, in a video created about a year after that one, Chris pretended (while dressed as a hooker) to dig up Patti and repurpose her as a coat. It seems that not only is Patti an unholy weapon of soul-sucking revenge, but a snuggly, warm coat, too.

The doghouse still stands as of April 2019.