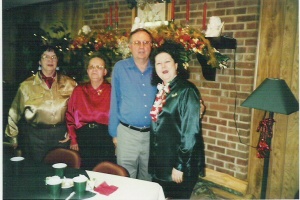 Barb, Corinna, Tom and Harriet at a Weston family Christmas gathering sometime in the 2000s.

Harriet Victoria Ashby (née Weston) is Barbara's younger sister and Chris's aunt. She was born on 9 January 1947 and married Thomas Eugene Ashby on 29 May 1964 in Charlotte County, VA. Tom was born on 28 October 1942.[2] As of 2014 they were living in Chesterfield County near Richmond and had recently moved from a house to a condominium. Chris leaked their previous home address in the Miyamoto emails, hoping that Shigeru Miyamoto would send them a letter to somehow establish his legitimacy.[3]

For unclear reasons, the Chandlers are not on great terms with the Ashbys. According to Al, Barb aggressively went after one of her sisters' husbands or fiancés when she was young, alienating herself from most of her siblings. Al suspects that it was Tom she went after.[4] In a letter from jail, Chris revealed that Tom and Barb had dated in high school.[5] Chris claims that Barb amicably broke off their relationship when she graduated in order to go off to college but that her sisters inexplicably spread rumors about her and called her a slut. Given Barb's track record, it is more likely that she and Tom broke up because she cheated on him with another man. Barb's older sister Corrina apparently remained on good terms with her, which explains why the Chandlers were still invited to Weston family gatherings during her lifetime. After Corrina's death in 2009, the remaining Westons started to exclude the Chandlers from social events, although Tom and Harriet never cut them off completely.

Harriet is a retired administrative assistant[6] who seems to admire the American presidents, and considering the number of flags she has on her Christmas tree, she is a TRUE and HONEST American patriot. She once gave Chris a map of the fifty states with slots for the state quarters as a present which he completed years later in summer 2010.[7][8] Other gifts from Harriet to the Chandlers include Chris's old fold-out bed[9] and a CD of big band romantic music which she gave Bob for his 84th birthday shortly before his death.[10] Uncle Tom, according to Chris, is a retired fire inspector and offered Barb advice after her house caught on fire.

As Chris told Catherine during her meeting with him in 2014, Harriet and Tom were in the habit of talking with Barb every Saturday over the phone, but they would not allow her over to their condo or even give her their address (probably a wise decision, all things considered). At the time, they were the last family members with whom Chris and Barb were still in touch.

Aunt Harriet and Uncle Tom were the relatives with whom Chris intended to stay when the revelation of his incestuous relationship with Barbara led to his being evicted from 14 Branchland Court on 30 July 2021 They revoked their invitation to Chris after the nature of his offense became apparent, and even contacted the police to tell them he was not welcome on their property.[1] leading to his arrest in Richmond on 1 August 2021. Chris eventually confirmed this himself in the first jail letter that leaked to the public.[11]

According to a letter from Chris to Kenneth Engelhardt, Harriet and Tom gave Barb assistance after her car accident on 23 November 2021, along with Barb's brother Wayne.