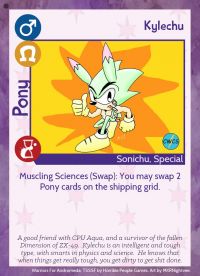 Kyle is a former Watchmen member and an admin in The Place Discord server. Chris cut contact with Kyle in June 2021, citing him as being among the toxic trio. Also known as Nova[1] and Spade,[citation needed] he was present in the Google Hangout chats. Kyle was also the inspiration for Chris's Kylechu OC. Kyle has mentioned working at a suicide hotline, though he has mentioned that at least one caller had gone through with taking their own lives,[2] something which was revealed in Discord leaks, both audio and text.

Chris had mixed feelings on Kyle. In a 26 June 2021 text to Null, Chris said on Kyle that he "talks soo damn much, boasting his smart-talk, interrogating my intentions and present mentalities. Damn, he's seriously tiring."[3]

Chris considered Kyle the most toxic of the "toxic trio", citing him as "the worst and least enlightened".[4]

Kyle was one of the first people that Chris had told his plans of shocking his crystals with electricity to, believing that he could help explain piezoelectricity to him, while citing a click-baity article about using the phenomenon to open up portals. Kyle would, however, attempt to reason with Chris regarding this, questioning his findings, to which Chris acted flustered.

Kyle was one of the Watchmen to confront Caden Peck when Chris announced plans to using a taser, believing that he wanted Chris to use one on himself.