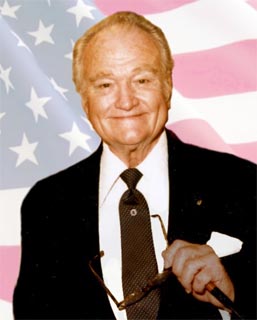 Luckily, he never lived to find out about his biggest fan.

Richard Bernard "Red" Skelton (18 July 1913 – 17 September 1997) was a popular American TV and movie comic of the mid-20th century. Originally a circus clown and vaudeville comedian, he parlayed his talents as a funnyman into a successful screen career spanning almost five decades.

In keeping with his often anachronistic taste in entertainment, Chris is an avowed fan of Skelton's comedy. (Coincidentally, Skelton's first TV show hit the airwaves in 1951, the same year as I Love Lucy, another Chandler family favorite.) He often claims to have used Skelton as a role model as far as learning how to effectively interact in social situations.

Exactly what he's learned from Skelton, though, is something of a mystery. On the Sonichu Girls forum, he talked about learning "how to be a gentleman", but didn't go into detail about what gentlemanly traits he picked up from Red. Likewise, on his DVD, he claims to have developed "a positive social behavior similar to Red Skelton" during high school, but doesn't offer any more details than that.

Some of Chris's comments from an IRC chat in December 2008 go into a bit more depth. There, Chris explains that Skelton taught him "how to be a more hospitable gentleman for one thing…how to speak with a softer tone of voice in pleasant conversation, and some fun jokes as well".

He also butchered a Skelton routine in Some Favored Comedians.

Whatever Chris learned from Skelton about how to relate to other people, in any event, it manifestly hasn't done him any good.

Skelton is apparently a regular attraction in the restaurant at Hotel Ricky Ricardo, despite having died in 1997.