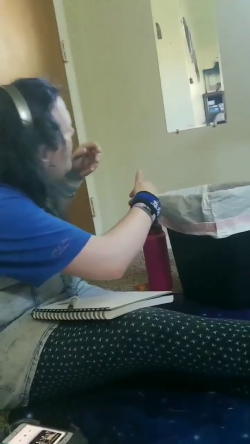 Chris imagining himself eating the asshole of French-kissing his first fictional wife, Cryzel.

Imaginary friends are psychological manifestations typically employed by toddlers to practice social skills. Most children grow out of the phase; Chris, on the other hand, retained his belief in imaginary friends well into adulthood, still holding the belief at 40 years of age.

Chris has always had difficulties distinguishing fiction from reality due to his autism. His imaginary friends were originally an occasional source of companionship, as well as a coping mechanism for moments of stress, such as the infamous example of invoking Sonichu to Mary Lee Walsh during his college days. As he entered his mid-30s, Chris retreated more often to his imaginary world as a reaction to the downward spiral of his life, ignoring the real-world problems of his debt and lack of independent living experience, resulting in a vicious feedback loop in which Chris's real-world problems worsen while his devotion to his imaginary friends increases. The machinations of the Idea Guys and the enablers that followed, whose chief tactic is role-playing as Chris's imaginary friends, further cemented the belief into Chris's mind.

Chris's devotion to his imaginary friends outweighed his real-life friendships with his Pokémon League friends, and he gradually lost contact with the latter to focus on his fantasy world.

How Chris interacts with imaginary friends 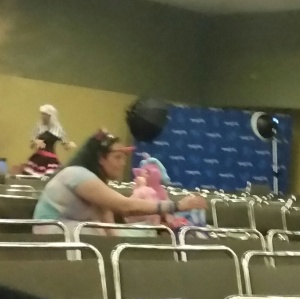 Chris, seen here publicly talking to an imaginary friend while at BronyCon 2017.

Chris is confused over the concept of imagination, interpreting it as visions into the dimension where his friends reside.

In a 2010 email to Jackie, Chris said that he communicated with imaginary friends before falling asleep - essentially describing a form of daydreaming.

Chris, with his third eye open, having visions of Hyperdimension Neptunia lore.

Chris tapped into New Age spirituality to try strengthening his perceived ties to the other dimension, with techniques centering around meditation. In summer 2017, he began referring to a "third eye,"[2] a concept associated with mental visions and precognition. He also experimented with astral projection, a term for an out-of-body experience achieved with meditation, as a method to access CWCville, and later dimension C-197.[3]

In fall 2017, the first of the Idea Guys entered the picture, role-playing as Chris's own imaginary friends, initially to see if he was gullible enough to believe it. From Chris's perspective, he thought that he was addressing his friends over the Internet instead of having to astral project. This validated Chris's beliefs and his faith in imaginary friends consequently escalated to the forefront of his life.

After the Idea Guys were ousted due to using their influence to extort Chris, various enablers crawled out of the woodwork and copied their techniques, keeping Chris firmly rooted in his fantasyland. 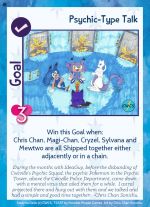 Chris's way of coping during the Idea Guys' reign was to retreat to his fantasy world and talk to his imaginary friends there.

Chris has tried to physically interact with fictional characters. During BronyCon 2017, an inconspicuous observer recorded him dancing with Magi-Chan, in reality having thin air as his dance partner. In January 2019, Chris claimed on Twitter to have been attacked by an imaginary enemy while in the shower, and that he "was able to whack the attacker with a half-full conditioner bottle."[5] In April 2019, Chris was spotted by a fan at Target "muttering really loudly"; from Chris's perspective, he had been hanging out with his imaginary friends.[6][7]

Chris also believes in spirit possession involving his imaginary friends, such as when he believed that Hyperdimension Neptunia character Uzume and his OC Magi-Chan had possessed his body.

During a 2004 confrontation with Mary Lee Walsh, Chris began to converse with thin air, pretending that Sonichu was in the office with him.[8][9] Chris then pretended to be Sonichu, giving a speech that he claimed Sonichu wanted to give to Walsh, before ending the lecture with a curse-ye-ha-me-ha (since he believes he has magic powers). Unsurprisingly, Mary ordered him to see a psychiatrist.

Chris has also conversed with Sonichu and Rosechu before falling asleep. At one point, he claimed that the pair offered him relationship advice.[9]

He claimed to have conversed with Megagi La Skunk, particularly regarding how she has allegedly told him that she (Megan, but by extension Megagi) should never have been born.[10] 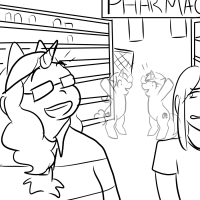 Chris believes that he has overheard conversations held by Night Star and other random My Little Pony characters.[11] In 2017, Chris also used his Night Star account on Twitter to talk to himself, even after revealing that Night Star was a sockpuppet of his.[12]

The prime member of Chris's imaginary friends, having surpassed Sonichu and Night Star in importance to Chris, as Magi-Chan's abilities center around psychic powers, which Chris deems useful in his misguided attempts to correct his real-world problems.

Magi-Chan's rise in status began around summer 2017, when Chris believed Magi-Chan was with him at BronyCon, to the point that he danced with thin air at the BronyCon gala, believing his dance partner was Magi-Chan.

Magi-Chan's importance to Chris has made him a key for others to use in manipulating him - the Idea Guys duped Chris into believing he was married to Magi-Chan, The Captain invoked Magi-Chan to convince Chris to trust him to stop the Idea Guys, Jacob Sockness deceived Chris with a faked chatlog involving Magi-Chan, and various enablers have used Magi-Chan to get their foot in the door with Chris.

Discord as seen in My Little Pony:FiM.

Discord is a male draconequus and former antagonist from the cartoon My Little Pony: Friendship is Magic.

In November 2017, as a result of the main Idea Guy's schemes involving Hyperdimension Neptunia lore, Chris felt he needed bodyguards in the real world to protect him from manipulation by fictional Neptunia character Kurome, choosing imaginary friends Magi-Chan, Silvana and Discord.

He went to his Pokemon club at The End Games escorted by Magi-Chan and Discord, and said he let Discord watch some Dungeons and Dragons games. Chris also asked one of his Pokémon League friends if she could see the imaginary friend, and claimed to have worn Discord as a draconequus vest.[13]

Trying to meet Neptune at GameStop

An Idea Guy told Chris that fictional Hyperdimension Neptunia character Neptune would be waiting for him at a GameStop during December 2017. Chris opted to go to the Forest Lakes location from which he had been banned, and on his own initiative, stood outside and thoroughly scanned the interior looking for Neptune, then followed up by honking on his car horn and shouting her name.[14]

During January 2018, the Idea Guys rewrote Sonichu lore so that Magi-Chan and his father figure, Mewtwo, were married.[15] Two months later, they convinced Chris that he was married to Magi-Chan and their OC, Cryzel, in a bisexual polyamorous marriage.[16]

The notion stuck with Chris, who declared his real-life Love Quest to be over. In June, long after the Idea Guys were ousted. Chris widened the marriage to officially include Mewtwo and Sylvana, Magi-Chan's other partner.

Chris has frequently mentioned his imaginary husbands and wives on social media. By posting messages written from their points of view (having Magi-Chan deliver the news that Chris went to the hospital),[17] claiming to be with them (stating that Sylvana helped him diagnose a problem with his car),[18] or referring to them as if they were real (saying his "hubbytwo" Mewtwo helped out in the events from the Detective Pikachu movie).[19]

Chris has long believed that religious and spiritual figures like God and the Grim Reaper give him messages in the form of dreams, not realizing the dreams are merely expressions of his own subconscious desires.

During the Idea Guys saga, an Idea Guy role-played as Jesus to troll Chris, as seen in the Cryzel Torture chatlog, validating Chris's egocentric beliefs that religious figures would seek to contact him.

During the subsequent Dimensional Merge saga, Chris took his beliefs to the next level, believing that various deities were his imaginary friends helping with the Merge.[20]

Chris uses his imaginary friends to find solidarity with changes to fictional media that he dislikes.

The initial design of the Sonic the Hedgehog movie was disliked by Chris, who claimed to have discussed the matter with Sonic, whose opinion was that the "movie does no good justice" for him.

When long-running cartoon My Little Pony: Friendship is Magic wrapped up production, Chris was upset and tried to convince Hasbro to continue the show, claiming to have consulted with Princess Celestia, a character from the cartoon.

Coping with people who distance themselves 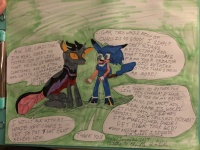 A leaked drawing by Chris. He role-plays an apology in which one of the blocking bronies apologizes to him for the block.

Chris has used the concept of imaginary friends to cope with people who explicitly don't want to put up with him.

In January 2019, several members of the Brony community blocked Chris's Twitter en masse. Chris tried to cope by roleplaying an apology between his alter-ego and the alter-egos of the bronies - in which the latter apologizes to Chris for blocking him - and then proceeded to take the roleplay seriously, sending the apology drawings out in a failed attempt to convince the bronies to unblock him.

In December 2019, Chris threw a tantrum over artust ProjectSNT's redesign of his Wild Sonichu character, later rationalizing his reaction as the result of dimension CS-89 calling him for help. Chris tried to get ProjectSNT to respond to his power fantasy, but she refused to act as an enabler and ignored him. Since she didn't want to interact with him, Chris appropriated her as an imaginary friend, declaring that she had been "force-transported" to dimension CS-89 to assist him with battling interdimensional evil there.

In June 2021, when Chris was about to leave the Watchmen Discord server The Place, and by extension, cut ties with Meghan, he stated to Null that he first had to "confirm Nightvee's safety and being from Meghan. But, I'm certain Nights and Reala have his back during uncertain moments",[22] referring to an OC by Meghan based on the character Nights from the Nights into Dreams video game. 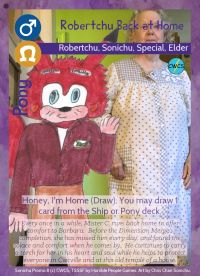 Chris's deceased father, reincarnated as a Sonichu spirit, posing next to his still-living wife.

Initially, in the years after Chris's father passed away, Chris was in mourning over the loss, accepting that Bob was gone.

However, the Idea Guys manipulated Chris into believing that Bob was alive in CWCville's dimension, reincarnated as a Sonichu and going by the name Robertchu. Chris tried to drag his mother into the fantasy of Bob being alive, having her pose for a photo next to a drawing of Robertchu for a TSSSF card. In the card text, Chris claimed:

Chris has interacted with his imaginary friends on video.