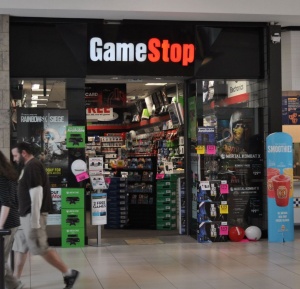 The store in Fashion Square Mall which Chris patronized. 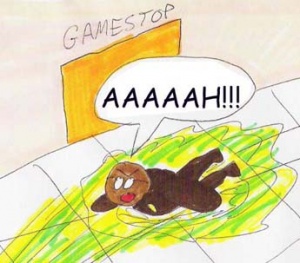 GameStop is an American video game retailer from which Chris used to buy his consoles and games, prior to 26 December 2014.

Within the comic, GameStop locations appear in CWCville Mall in Sonichu #0, and in the Sho-Mall Region in Sub-Episode 1 .

In 2008, Chris won $400 in the GameStop Be A Star Sweepstakes Guitar Hero contest after an uncoordinated troll attack backfired.

Chris also supposedly met Chloe there while the two of them were pre-ordering LittleBigPlanet.

On 23 November 2009, a post was made on a gaming forum by a GameStop employee.[1] The post documented a real-life encounter with Chris and contained four pictures.

The employee, named Angel, had some knowledge of Chris prior to this meeting, thanks to Chris's Encyclopedia Dramatica page. Angel made a wager with a gal pal that if he was to ever take a picture with Chris, she and Angel would have to get married. The gal pal accepted this challenge—yet another example of people finding true love through trolling Chris. 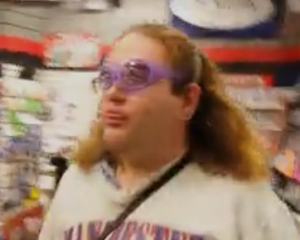 Chris blowing a raspberry at getting filmed.

On 26 December 2014, Chris was caught vandalizing a Sonic Boom display in GameStop, the result was recorded by a bystander who uploaded the evidence to Tumblr the next day. As a male member of staff called security, Chris stormed out, saying "Don't call anybody!" and sprayed the poor man, with mace, according to the person who recorded this. Chris clearly still has no idea how to behave in public, as he continues to deface store property (in fact he's lucky not to have been arrested for vandalism yet), abuse staff, and generally, turn heads for all the wrong reasons. Moreover, his actions clearly show that he believes he is answerable to no-one.

Moreover, Chris violated a previous ban from the store to do this, which is why he is wearing a pair of purple toy sunglasses, as some sort of disguise. A troll from 4chan supposedly called the employee Chris has attacked, who confirmed he will be pressing charges, and it was eventually confirmed that Chris went to jail, and was later released on bond. In 2015, after a string of continuances, his offense was reduced from a felony to a misdemeanor, and he was charged a fine of $541, which he paid off the following year.[2]

In November 2015, CWCville enacted an embargo on GameStop in retaliation for their discriminatory practices against Autistics, Lesbians, and transgenders.

After a video in which Chris pleas for an end to the discrimination, he received a letter stating that GameStop decided to extend the ban to cover the state of Virginia, showing that Chris's feeble attempt at damage control had failed yet again. It was later shown that the letter was the work of a troll.[3]

Chris dropped the embargo on 1 February 2016,[4] stating that "I have ended my embargos on GameStop, Best Buy and Simon Mall because nothing has come at all from that". However, that post was the precursor to one begging his audience to buy him a PS4 from a place such as GameStop or Best Buy, showing that he had only retracted his embargo because he thought he might get something out of it.

In October 2016, Chris resumed the embargo[5] after a contract he wrote and took to the GameStop management failed to get his ban repealed.

In January 2018, the Idea Guys manipulated Chris into driving to a GameStop after telling him Neptune from Hyperdimension Neptunia was "in a Gamestop", so Chris decided to drive to the Forest Lakes GameStop he was banned from. He honked his car horn, screamed for her multiple times, and "carefully scanned" the interior from behind the glass windows.

In March 2019, a Gamestop employee uploaded an eyewitness video of Chris shopping for a Poke ball Plus peripheral for his Nintendo Switch he got from Sarah and Steve. 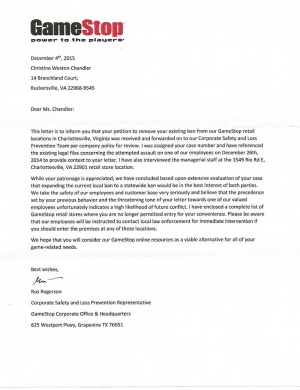