OmegaCon is a gaming and anime convention held annually in Charlottesville, Virginia. Chris attended on Saturday, 29 August 2015. By all accounts, it was his first appearance at a convention since Anime Mid-Atlantic in 2005.

This was accompanied with a couple of photographs. It is not known who took these photos, but apparently Chris went alone.

Somehow Chris had managed to escape his domestic responsibilities to his mother and his dogs to spend the day having fun.

When William Elliott Waterman mistook his costume as a "vocaloid," Chris clarified:

Vinyl Scratch is a minor character in My Little Pony: Friendship is Magic who also shows up in human form in the Equestria Girls film series, which Chris adores. She cohabits with another musically inclined pony named Octavia. Chris had been a fan of this character for some time. He had added 28 videos to a playlist called "Vinyl Scratch and Octavia" on his YouTube account, and had made a number of positive statements on Facebook. Vinyl Scratch brings together Chris's interests in music, dancing, and--while the children's cartoon doesn't go there--lesbianism.

Chris's costume appears to be largely homemade. He is wearing the same purple My Little Pony goggles as when he attended his first pride festival in August 2014, and when he maced a GameStop manajerk. Vinyl Scratch's purple tights are conveniently suited to Chris's tucking methods. He had first given himself the terrible blue hair dye job in July. The musical notes on his costume are the wrong way around, because he used a flipped image as a reference. He is also, rather surprisingly, wearing his famous medallion in public, possibly for the first time since 2010. This is similar to how he cosplayed "as himself" at Anime Mid-Atlantic for the sake of self-promotion. This time around, however, he's also promoting the medallions themselves, as they are his hottest eBay item.

Chris entered the cosplay contest, posing for the contest line and a group photo. His performance was presumably not unlike what the crowds at Impulse Gay Social Club have to put up with every weekend. A few days later Chris would reveal that he had just finished a seven-week belly dancing course, which undoubtedly influenced his moves.

He didn't win. This doesn't seem to have dampened his spirits, though--he gave the event a five-star review on Facebook.

Field agents report that Chris also attended a panel for indie game developers and used the Q&A segment to rant about the trolls and cyber-bullies. He handed out his business card to everyone he could, and carried his Sonichu Amiibo with him in a bag bearing the marriage equality logo and the message "TOTES GAY" written in large letters.[1]

Someone on YouTube posted seven seconds of surreptitious footage:

Chris can be seen very briefly in this walkthrough at 3:46 with a small group:

Another image of Chris on stage shows up at 7:21 of this slideshow:

Chris also appears at 0:28 in this unembeddable video of the contest line. 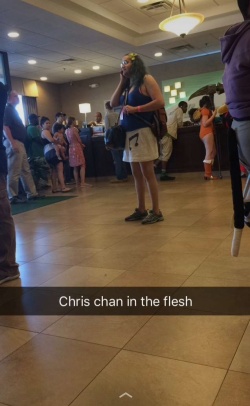 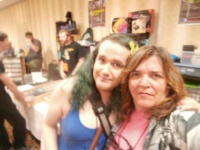 According to Kim on Facebook, this is where Chris tried smoking marijuana that he had gotten from Bobby Marley.