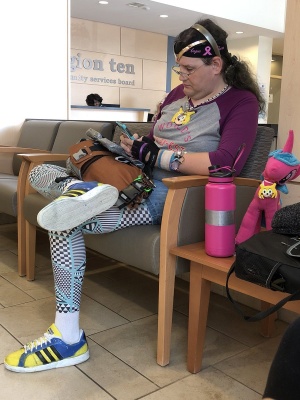 How Chris dresses for a psychiatrist appointment. Note the Night Star plushie, Sonichu medallion (on both Chris and the plushie), multiple headbands/Sailor Moon tiara on his head, and the handpainted shoes.

The Therapeutic Docket in Albemarle and Charlottesville is a court diversion program for offenders "diagnosed with serious and persistent mental illness", which offers routine meetings with courthouse staff and mandated participation in therapy programs as an alternative to jail.[2]

Chris was placed into the program for his March 2018 offense in trespassing at the Fashion Square Mall from which he had been permanently banned since 2014 for pepper spraying a GameStop employee. He was on the Docket program for nine months, from 10 July 2018 until 23 April 2019.[3]

The Docket was a complete failure in Chris's case. During his time in the program, he ignored several of its requirements and also failed to benefit from the psychiatrist he was mandated to see, instead retreating to his imaginary world, even during appointments. Despite this, similar to the institutions behind Chris's education, he was passed along until graduation from the program.

The Therapeutic Docket was implemented in Albemarle/Charlottesville in February 2018,[4] only a month prior to Chris's trespassing offense – a stroke of luck for him, as without the program to fall back on, the outcome would likely have been a jail sentence.

The Docket is structured into three phases with progressively steeper requirements. Completion of a phase results in less frequent court check-ins. Upon completing the program, the court may dismiss the original criminal charge.[5]

As part of the Docket requirements, Chris was mandated to keep routine appointments with a psychiatrist and a therapy group at Region Ten. A couple weeks after being placed on the Docket, Chris vented his frustrations over having to do so:

Chris was required to meet with the Boost support group. According to the Region Ten website:

Chris mentioned on Twitter that he went on nature walks with the group.[8]

Since Chris's case file with Region Ten began shortly after the Guard Dogs rescued Chris from the Idea Guys, Guard Dog Null tried to have Chris talk to his mental health providers about the alleged extortion by the Idea Guys, in an attempt to get the ball rolling on an investigation. However, Chris was hesitant to bring up the matter, instead preferring to babble about his imaginary friends during his mental health appointments.

Chris continued to use his mental health sessions as an outlet to express his beliefs, telling his psychiatrist about his Dimensional Merge-related beliefs in December 2018 and leaving her "flabbergasted".[1] In March 2019, Guard Dog Marvin stated:

In January 2019, the mental health team taught Chris a new term to add to his persecution complex – PTSD. Chris had told them about the Nathanael Greene Elementary School incident, in which Chris, while in fourth grade, had an autistic meltdown and had to be restrained.[11][12]

Chris's usage of PTSD came to a head later that month, when he found himself blocked over Twitter by members of TF2 Analysis. During his whining and raging over the blocks, Chris tried to guilt people into lifting their blocks by claiming the situation was giving him PTSD. 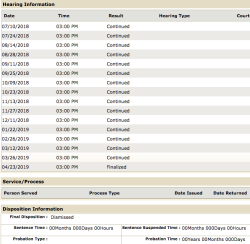 The Docket offers incentives such as praise from the judge, applause from the court audience and gifts such as tokens, movie tickets and gift cards in exchange for complying with program terms.[5] Despite this, Chris repeatedly flouted several of the Docket's guidelines and rules during his time in the program, with barely a slap on the wrist received in consequence.

Chris was promoted to the final Phase Three of the Docket in December 2018 and his court check-ins reduced to once-per-month. In March 2019, Chris was penalized with a sanction for an unknown reason, when he was temporarily set back to the Phase Two scheduling (bimonthly court check-ins). However, on 23 April 2019, the Docket saw fit to graduate him from the program, whereupon his Fashion Square Mall trespass charge was officially dismissed.

Chris's experience with the Docket did nothing to improve his view of law enforcement. Only a few months later, Chris nearly got in legal trouble again when he defiantly kicked a police car in retribution for the times the police had dared to get in his way.[18]