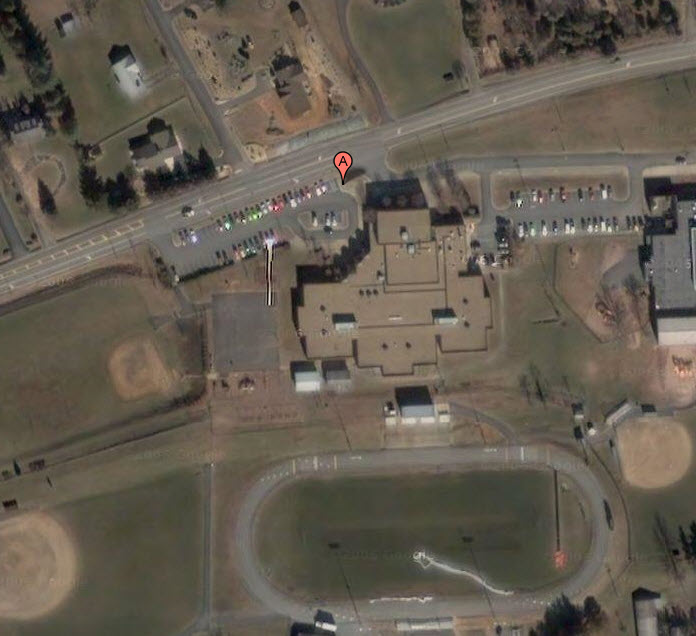 Nathanael Greene Elementary School is an elementary school in Stanardsville, Virginia, a 192-acre (78-ha) town which basically consists of a highway intersection. The school is named for the Revolutionary War hero Nathanael Greene. Chris attended fourth-grade classes at this school. To this day, he consistently misspells the school's name as "Nathaniel Greene" and the name of the town where it is located as "Standardsville".

Bob pulled Chris out of the school after Chris was allegedly abused by the principal and members of the staff.

Chris has also claimed that his time at Nathanael Greene inspired and justifies his hatred for homos, since the principal who allegedly assaulted him was supposedly gay.[3] If this sounds a little odd to you, well, we're just getting started.

Based on "physical abuse from 5 faculty members", Chris's parents took the case to Greene County court. After the school board threatened to take Chris out of mainstream schools, Bob and Chris moved to Chesterfield County.[4]

The autism papers confirm that Chris's parents moved him out of Greene County to avoid the possibility of having Chris admitted to a special school. Still, a clear picture of what actually took place has never come together. In his accounts of and references to the incident, Chris unsurprisingly leaves out important details (such as what prompted the school staff to "abuse" him) and tends to spin the story in a way that favors him.

Chris's side of the story

Chris briefly mentions Nathanael Greene in his "Song of Christian", saying that the last time he can remember getting an F in school was there (or possibly Greene County Primary School). The earliest documented mention by Chris of the incident which led to his departure from the school was made in 2003 in Chris + Sarah's Life-Shares in which Chris blamed the incident on the faculty's lack of knowledge on how to deal with an autistic child. Chris alluded to the incident once more in Story of My Current Days ("my torturing past with the jerks of the Greene County School System") but did not elaborate any further. His earliest detailed account of the incident appears in his first major YouTube address to the world, from 7 November 2007.

He recounted a similar, but shorter version of the story in his Wikipedia profile.

In the Father Call, from November 2009, Chris brought up the incident more or less out of nowhere, seemingly as a bid for sympathy.

One of the Common Questions Chris answered in the Mailbag in November 2009 asked him to list the 10 worst things that had happened in his life. The elementary-school incident came in at number 10.

In a June 2021 Twitter post, Chris named one of the teachers involved in the alleged pinning as "Mrs. Gaedy"[1] (also spelling it as "Gaede" in earlier tweets.)

In the 1 November 2021 Jail Call, Chris describes it as the worst time he was abused, besides the trolling.

Chris's other side of the story

In early 2009, Chris began to reveal another facet to his story, claiming that the principal was a pedophile. He alluded to this element of the story in his Captain's Log video from 21 January 2009, where he hinted that he (obviously lying through his teeth in order to bawww to his audience) had uncovered "repressed memories." Chris later went into a bit more detail in Mumble 3.

In an IRC chat from around the same time, Chris had more to say about Principal Johnson, as well as his father's campaign against the school board that later ensued. 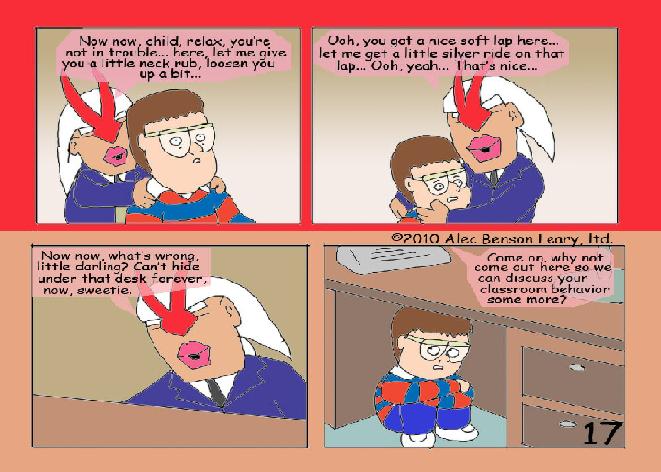 After he told Alec in that phone call, it was parodied in Asperchu

Chris recounted another version of the story in Alec Benson Leary Phone Call 8, when Alec claimed that homosexuals had never done him any harm.

When Alec pressed him to explain what those "offensive things" were, Chris couldn't recall any details. Bear in mind that Chris considers anything offensive if it's something he doesn't want to hear, so Bruce was probably just telling Chris to study harder or behave better or something similar.

Given the fragmented nature of Chris's accounts, it's not clear whether he believes that the principal's-lap incident and the pinned-down-and-taped incident were directly connected. Certainly it's easy to imagine how they might be linked together: Chris goes to see the principal, he feels threatened, he becomes agitated, then more staff members have to be called in to deal with the problem. Another possibility is that he threw a hissy fit over getting an F on an assignment and the situation got out of hand. However, a more complete and reliable version of the story (or stories) has yet to be discovered.

Chris's beliefs that he was molested and that there was a conspiracy to have him institutionalized is most likely inspired by Bob, who has delusions of things like unidentified possible homosexuals, Megan Schroeder, and Michael Snyder all being in collusion to get Chris kicked out of the GAMe PLACe. Bob's attribution of that incident to an imaginary cabal instead of Chris's behavior also shows a similar pattern of accountability on behalf of the Chandlers.

Obviously, there are several oddities and inconsistencies in Chris's stories. This may be a deliberate attempt to cover up the truth, or simply the result of Chris unconsciously conflating and exaggerating his garbled memories of the event.

Furthermore, this assumes that Chris's claims of abuse by his principal aren't entirely fabricated to begin with. For starters, his line about "repressed memories" is fishy, and the revelation becomes even more suspect in light of its timing.

Chris first mentioned his recollection of the incident in a video recorded right after his 20 January 2009 IRC chat, where Clyde Cash and BILLY MAYS accused him of being a closeted homosexual and mocked his irrationally aggressive homophobia. It's quite possible that Chris invented the story about being abused as an excuse to defend his homophobia and a means of further proving his straightness — since he was abused by a gay man, goes Chris's unique version of logic, that means he can't be one himself, and likewise that incident of abuse justifies his irrational hatred of gay people in general.

As for the more thoroughly-documented incident where Chris supposedly had to be subdued and tape-recorded, it's most likely that Chris's autistic behavior was difficult for the school's staff to control, and the district sought evidence to prove that Chris needed to be moved out of mainstream schools. Evidence like this could also be used as evidence of parental neglect or incompetence in choosing to avoid the obvious care a child with mental disabilities needs.

A critical gap in the story concerns exactly where Chris would have gone if he had been removed from the mainstream school system, as the Nathanael Greene staff proposed. As mentioned above, the psychiatrist who conducted Chris's psychiatric survey in 2004 described it as a "special school," but Chris generally refers to it using harsher terms like "institution" or "mental institution," as in the Father Call and his e-mails with Jackie, presumably because his parents have referred to it in such a manner.

One clue appears in the Jackie communications, where Chris calls it "that Winchester Mental Institution." Winchester is a small city in the Shenandoah Valley area of northwestern Virginia, and it's home to the Grafton School, a well-established school and group home that specializes in, among other things, the education and treatment of young people with autism. Some observers speculate that this may be where Chris would have been sent had his parents not insisted on mainstreaming him.

The reasons why his parents were so adamant to keep him in a "normal" or "mainstream" educational environment aren't hard to guess. Not surprisingly, most of these objections are self-centered and are really about the parents' own feelings, not their child's needs. Like many parents whose children have special needs:

Ironically enough, given Chris was temporarily sent to Western State Hospital in February 2022, the Chandlers' obsession with keeping Chris out of what they thought was a mental institution indirectly led him to one. Not to mention a similar event to what roused the ire Chris's parents in the first place happened to Chris whilst there (he also equated both incidents with each other)[6].

After pulling Chris out of Nathanael Greene, Bob Chandler unsuccessfully took legal action against the school district. His case was eventually dropped in 1994. In 1993, Chris's family moved him away to the Richmond suburbs in order to keep him in mainstream classrooms, a crucial step in the development of the Chris we know and love today.

In subsequent years, Chris has taken the notion (which probably originated with his father) of an autism-hating homosexual conspiracy to drive him from the school system and inflated it into something even more unlikely. In a May 2010 YouTube video he imagines that they were also responsible for forcing him to move away from his high-school friends in Richmond and getting him kicked out of The GAMe PLACe.

The decision to mainstream Chris at all costs is perhaps the most significant turning point in his development. Had he received an education more effectively tailored to his needs and learned more about his condition beyond how to use it as an excuse, he might have become a substantially more well-adjusted adult. Unfortunately, we will never know.

To this day, all of the residents of 14 Branchland Court consider it the wisest decision they have ever made.

However, Chris later implied that the trolling was the worst abuse he's received in his life, superseding the "pin-me-down event in fourth grade" and his arrest.[7]