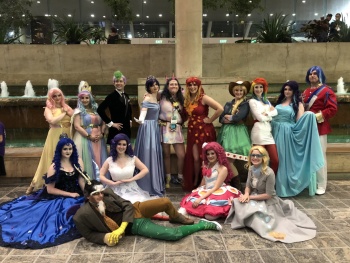 Chris meets the cast of the Grand Galloping Gala show.

BronyCon 2019 was the final iteration of the annual convention for fans of My Little Pony. The convention took place between 1 and 4 August 2019 at the Baltimore Convention Center. Unfortunately for Chris, despite his best efforts to counter the inevitable, both his favorite animated series and his favorite convention would draw to a close in such a short timespan.

Most notably at this convention, Chris discovered Twilight Sparkle's Secret Shipfic Folder, a fan-made shipping card game. Once the convention was over, he would begin posting his own fan-made cards on Twitter – becoming the successor of his custom Pokémon cards and Yu-Gi-Oh! cards.

Sarah and Steve had originally planned to share a room with Chris, but they pulled out, leaving Chris to appeal for $600 to cover costs.[1][2] On 14 July, some ween gave him the whole amount, and on 30 July, he confirmed on YouTube that he would attend the entire four days in his General BronyCon Announcement.

In July, Chris teased his attire for next month's BronyCon in two tweets.[3][4] Kiwi Farms soon deciphered that Chris would be cosplaying as Kris, the female selectable protagonist of the video game Pokémon Crystal. Considering Chris's usual hack jobs when it comes to hair dye, achieving such seaweed color would not prove too much of a challenge.

It should be noted that for the duration of the convention, Chris wore a metal wire on his forehead, shaped to resemble the Commodore logo, which represents his CPU Blue Heart alterego.

In the early hours of 1 August, Chris made the journey to Baltimore, leaving at around 6:15 local time (EST) and arriving at around 10:45. The journey took Chris and Son-Chu about 4 hours and 30 minutes, 2 hours longer than the estimated time.[5] At the convention itself, as a long time pledger of voice actor, Michelle Creber's Patreon, Chris joined her private Patreon party.[6]

Shoutout to a fan

Chris: Hi, Jacob! This is Christine Chandler, coming to you live from [mispronounces] BronyCon. Here's to you being a good fan of mine. Cheers [raises mug to camera] with a home mug of sarsaparilla.

That morning, Kiwi Farms user Jasonfan89 captured some covert footage within the convention:

Eventually, they captured a video of Chris while Smash Mouth's All Star plays in the background. At first, Chris seems reluctant to join in with the singalong – perhaps, due to his previous association with the song; however, from 0:54 onwards, he can be heard singing:

Chris recorded a birthday shoutout for the rapper, Billy the Fridge:

Chris: Hi, Billy. This is Christine Chandler, coming to you live from BronyCon. You be an awesome dude, and you have an awesome day. You're better off than [deepens voice] BillyWitchDoctor.com. He don't like... giant chicken. [laughs]

The video was later used in a YouTube Poop-style video, as part of Billy the Fridge's birthday livestream.[9]

From The Matrix to Silence of the Lambs Panel

On the evening of day 2, Chris attended the From The Matrix to Silence of the Lambs: Movies in Pony Voices panel,[10] which saw YouTube voice actors reenact famous movie scenes as MLP characters. Throughout the video, Chris is seen constantly fidgeting like a bored child:

That night, Chris attended the Grand Galloping Gala concert. In summary, the concert was a blend of dancing and Broadway style performances by a troupe of actors/cosplayers who play the main characters of the animated series. Concertgoers also witnessed a brony marriage proposal.[11]

Jasonfan89 chipped in once again:

Following the concert, Chris participated in a photoshoot with the cast.

On the Saturday morning, Chris attended the TF2 Analysis Anarchy panel—composed of several brony analysts who had blocked Chris back in January—where he witnessed Mad Munchkin being proposed to. Chris appears behind the man in the wheelchair, slightly to his left (the vibrant pink Night Star plushie is a giveaway). Notably, Chris can be heard trying to get the attention of the panel by making a childish quip at 0:17, and recurring high-pitched screams (especially 3:31) as the audience celebrates the newly-engaged couple: 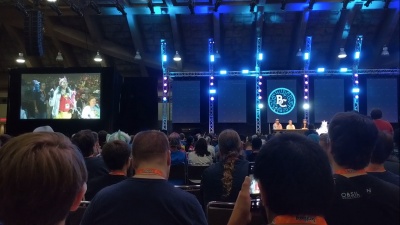 At the Pony Origins panel, Chris came face-to-face with the true original creators, Bonnie Zacherle and Lauren Faust of the 80s cartoon and Friendship is Magic, respectively.[10][15]

During the Q&A, Chris went on to ask Lauren Faust about whether she had planned to include Megan, one of the 80s human characters in the most recent iteration of the show:

Chris: Hi, Lauren. Hey y'all. All right, first. I just want to say: Thank you for all your shows. Aside from MLP, [rock on gesture] love The Powerpuff Girls!

Chris: And this'll lead into my question [?], beginning from G1. About like, you know, the human characters, especially Megan, and the relationship between the humans and the ponies. Uhh... Did you just think about wanting to do that originally for G4 in the earlier phases, or did it just kinda like–uhh, it was rejected initially, or [unintelligible] it all, and then later figured out for like, Equestria Girls?

Lauren Faust: You know, I... umm–Early on in the development process, I had considered that Hasbro might ask me to bring in Megan, because you know, working in the animation business, I was kind of anticipating like oh [jazz hands] "girls can't relate to horses, they need to have a person to talk to and relate to. So you need to have a person in the story." So, I was expecting them to do that. They never did. Like, not even once. But, I did have a little snippet of an idea to bring Megan in for like maybe a special or something like that. It was a very brief idea that might have just been like a one shot idea. But I didn't need it, so I didn't really flesh it out [chuckles].

Chris: Ah. Well, at least it brought–at least it all brought out in Equestria Girls. [very sincere] Thank you.

Looking back on the event:

Friendship is Magic: The Gathering

On Saturday evening, Chris was spotted entering the Friendship is Magic: The Gathering panel hosted by Josh Scorcher, during the latter half of the event. When the panel concluded, Chris walked towards the front where Josh was talking among fans, in what was presumably an attempt to converse with Scorcher to smooth things over after the mass Twitter blocking. It is unknown what transpired in this conversation or if it had any affect on Scorcher's opinion of Chris.

As Scorcher and a large group of panel attendees left the panel hall, Chris was observed walking out at the very backend of the group. It was at that point that a selfie was requested by an editor of the CWCki, and taken right outside the entrance to Hall of the Stars. 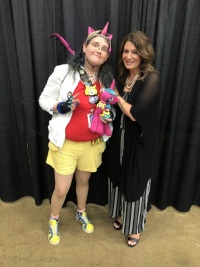 Later that day, Chris went to the meet and greet of voice actress, Nicole Oliver. For $30 worth of Tugboat, Chris received Oliver's autograph—done on one of his drawings—and they both posed for a photo together.[17][18]

Having failed to learn the lesson from the Tabitha St. Germain block, Chris shared his photo in a tweet tagging Nicole Oliver, which resulted in a surge of ween comments. This prompted the voice actress to voice her opinion against online harassment in a separate tweet; it is undeniable that she was alluding to Chris:

One month later, Chris would convey as Magi-Chan that during their meeting, he reassured the voice actress that she would be bound to voicing one character for a little longer than she hoped:

In an August 2020 leak, it was revealed that Nicole Oliver eventually blocked Chris on Twitter.[21]

BronyPalooza was a recurring all-night concert, featuring several musicians of the brony community.[10] After enjoying Creber's Patreon party on the Thursday, Chris made an appearance during her Saturday BronyPalooza gig. Chris can be seen at regular intervals during the first two hours of the video, but is especially recognizable at 1:15:33, brandishing his Night Star plushie:

A video with an alternative camera also shows Chris' plushie.[22]

While the concert was ongoing, Chris snapped some photos and shared them on Twitter:

It is unknown whether Chris remained at the concert after Creber's set ended.

On the final day of the convention, Chris met an old foe, and paid another $30 to meet voice actor, Rebecca Shoichet.

According to a user of 4chan's /mlp/ board, on the Sunday, they joined Chris to ride in Son-Chu and have dinner together:[24]

The /mlp/ user found his post on Kiwi Farms and elaborated on the experience:[25]

On 6 August, Chris posted a thread on Twitter, showing off his haul from BronyCon.[26] To say that Chris bought a lot of merchandise would be a severe understatement:

In closing, since his first attendance in 2017, BronyCon has left an overall positive impact on Chris. The conventions were one of the few places where mindsets such as his are normalized, as their target audiences are typically a melting pot of like-minded people. BronyCon was a setting which provided a brief escape from his various problems back in Ruckersville, and being a troll-free safe space, has also allowed Chris to filter the positive attention he receives from fans; Chris claimed that in 2019, he was approached by "200 awesome and kind individuals."[27] 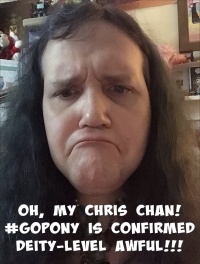 BronyCon has been the catalyst in several noteworthy events in the late 2010s: The 2017 convention gave Chris the much-needed motivation to commence work on his next issue of Sonichu; albeit, it was a MLP fanfiction which happened to be part of his comic book canon. After BronyCon 2018, he began engaging with members of the brony analyst community—several of which were present at Baltimore—which ultimately led to the Twitter Block saga and his Soft Exile on social media.

Returning his homelife after BronyCon 2019, Chris resumed his My Little Pony protest campaign and demanded Hasbro for a renewal of the series to at least Season 14. On 12 October 2019, the finale of Friendship of Magic aired, leaving Chris in vehement denial. As of November 2019, he refused to watch it, and instead chose to send a barrage of ranting tweets to both Hasbro and anybody mentioning it. Despite other media picking up where the show left off, including My Little Pony: Pony Life (which is essentially G4.5 of the franchise) and the IDW comic series,[28][29] Chris refuses to acknowledge these as any form of canon because it doesn't conform to his existing fantasy world. As of July 2020, Pony Life has aired to lukewarm reviews, but Chris remains committed to his boycott.

With the departure of BronyCon, Chris latched onto the next well-regarded convention in the USA, BABSCon. BABSCon is also a yearly convention; however, it is instead based in the San Francisco Bay Area.

By November 2019, Chris had organized tickets and accommodation to the event;[30]; however, in early 2020, the COVID-19 pandemic started, forcing BABSCon to cancel the event. In response, Chris declared that the coronavirus was totally not a big deal. Unable to cope with his disrupted calendar, in April, Chris "swapped bodies" with Sonichu to attend the convention in Dimension C-197.[31] The next month, "Sonichu" would attend the online equivalent in Dimension 1218.[32]

In December 2020, BABSCon announced that they were canceling the 2021 convention, again due to the Covid-19 pandemic. Chris responded with a cryptic tweet, saying "The Merge is On." [33] As the pandemic was mostly put under control by April 2022, the convention finally took place as scheduled, but Chris is preoccupied with other matters and was unable to attend.