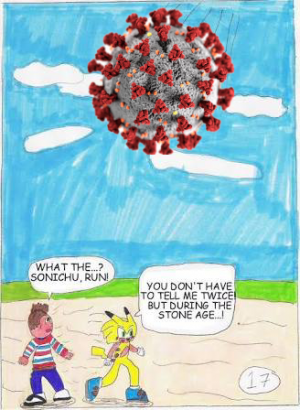 COVID-19 (Coronavirus Disease 2019), caused by a virus officially named SARS-CoV-2 and colloquially referred to simply as coronavirus, is a fast-spreading disease responsible for the largest pandemic of the 21st century thus far, infecting millions of Americans and even the 45th President of the United States. It has prompted governments to recommend stricter sanitation routines; and to encourage social distancing practices, such as staying six feet (2 meters) apart, wearing masks when going out, and only keeping essential services open – which, to the dismay of Chris, doesn't include conventions.

In March 2020, in the midst of the pandemic, Chris exhibited a juvenile attitude to the nature of the disease and the body's own workings. He believes learning about the symptoms would mentally tire him which would put him at a higher risk of contracting the virus.[1] Later that month, he endorsed watching the anime series Cells at Work! to build one's resistance.[2] This anime depicts cells - specifically those of the blood and immune system - as people, and is based on anatomical and hematologic science, but with obvious artistic license taken considering the way the series is portrayed. Given Chris's views on OCs, it would appear that he believes Cells at Work! to be a direct, literal depiction of what goes on in his body.

Chris and his mother became fully vaccinated in May 2021.[3] As of April 2022, over 65% of the United States has been fully vaccinated and things are slowly returning to a state of normalcy – including My Little Pony conventions – but the pandemic is still a significant risk to the unvaccinated, particularly with new strains surfacing. 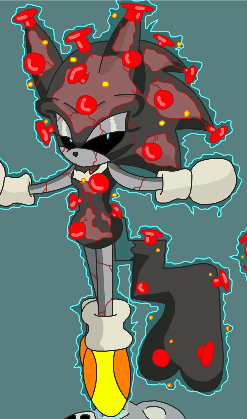 This is what Chris probably believes.

On 28 March, Chris claimed the pandemic to be a sign of the Dimensional Merge and that COVID-19 was cured weeks ago in his fantasy world. Chris also claimed that My Little Pony characters were working to stop the pandemic problems in the real world.[4] This disease had also made its way to CWCville in C-197 and some neighboring dimensions, but was somehow cured in all of them by mid April 2020. (Chris would eventually state that in his fantasy land, the "Devil's Breath" virus released by Doctor Octopus in the 2018 Spider-Man video game was analogous to COVID-19's spread in the real world. Given that the virus is dealt with fairly quickly in-game after the outbreak, this could be in-line with Chris's timeline, even if the game is set in Autumn rather than Winter/Spring.)[5]

Chris's beliefs in how COVID-19 factors into the Dimensional Merge are also incredibly contradictory. Chris has claimed that this pandemic is a part of the convergence as a way of evening out the population on both sides of the iron curtain before it can occur. He says this virus will help remove those who are mentally and physically weak. However, he also claims that he will use time travel to undo the pandemic in our timeline so he can attend BABSCon 2020, which directly contradicts his own stated beliefs in the Dimensional Merge saying that everyone who dies will make the process easier.

Furthermore, his statement that he used a "body swap" to attend BABSCon 2020 in C-197 makes the entire idea of Chris time-travelling and saving millions from contracting the Coronavirus and hundreds of thousands dying entirely irreconcilable with the idea that all of the people that died needed to for the Dimensional Merge to happen; after all, why bother with all that death and Merge preparation if he's just going to set things back by time travelling to create a new timeline where the event was never cancelled? On top of that, the idea that the people who die in Dimension 1218 as a result of the Merge being resurrected in Dimension C-197 does nothing to "thin the herd", and thus the oncoming world's populace would suffer from overpopulation problems after the Merge.

Chris, of course, conveniently ignores these issues because he can't put two and two together, because he just can't keep his shitty narrative straight. These inconsistencies reveal that this entire diatribe, down to Chris pretending to be his own fictional character for more than half a year, is nothing more than an elaborate coping mechanism where he can create a scenario in his mind that allows him to go to a convention that got cancelled instead of just imagining that he did in his fantasy world. Eventually, he got bored of pretending to be Sonichu and reverted to being himself in February 2021; he continues to believe that the Merge is coming, although he's seemingly come to terms with the fact that the 2020 and 2021 iterations of BABScon are not coming.

Weens and A-Logs have tried to crowbar a more severe outbreak into C-197, with one known attempt using the Corona-Chan meme, but Chris has so far dismissed them as taking place in yet more alternate dimensions. However, since roleplay writers do not have to include the pandemic in their universes for any reason, Chris could have just said that COVID-19 simply did not happen in C-197, and that would have been it.

Sonichu, in Chris's body has a plan to stop the pandemic, by going back in time and undoing it. His intent to do so was announced in an address to the Official CWCki Server on 12 August 2020:

When answering a user's question about this vague plan the next day, "Sonichu" reiterated that undoing the pandemic was the main objective, and that there were currently no plans to change other past events.[6]

The plan was briefly referenced again in a 2 September 2020 chat where "Sonichu" said it would be enacted after Chris's body fully unlocks all necessary abilities and powers.[7]

Further details, such as how this time-travel plan will be implemented, are currently unknown, perhaps even to Chris.

Notably, preventing COVID-19 would fulfill Chris' prophecy that he will attend BABSCon 2020.

Due to COVID-19 being declared a global pandemic in early 2020, multiple rules came into effect, including but not limited to shutting down of all non-essential services. Though the definition of essential was very vague in the USA, conventions were labelled non-essential and were not allowed to open. This stressed our autistic hero as he could no longer go the places that had (somewhat) accepted him.

Chris couldn't deal with the cancellation of the one place where he found people who liked the same things he did and as a coping mechanism declared that Sonichu has taken over his body and his soul has left for CWCville to attend BABScon.[8] Despite social distancing having been enforced in Virginia, this didn't stop Chris (as Sonichu) attending the Leftovermedia livestream with Noah and the musician Max Mandu, footage from the livestream clearly showing that social distancing wasn't in place.

Chris also said that a vaccine would be developed within two weeks from mid-March, suggesting that all his knowledge about epidemics comes from Plague Inc. and games like it. He then went on to say that we have not applied what we have learnt from past epidemics to this one. During the SARS and MERS epidemics, we were not able to create a vaccine 3 months after they were detected, thereby proving how naïve he is.

Instead of paying his mortgage or various loans, Chris decided that he will be buying all the garbage that other Bronies have for sale online.[9] He begged his audience to buy his cards and comics so he can then give that money to Bronycon artists. When people called him out for this, he said the cancellation of Bronycon left these people with no source of income and that he was a helpful person Sonichu for buying their trinkets.[10] Chris probably doesn't actually care about the artists and just wanted all their products and gave his stupid reason to justify wasting money. 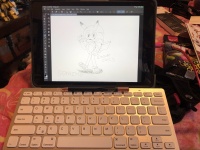 Notice the charging cable held together using tape and velcro. History might repeat itself.

On 29 May, Chris purchased an iPad, stylus, and subscription to Clipstudio to draw art digitally, using money from the Economic Impact Payment stimulus money sent out by the Pmurt administration.[11] Chris complained about how difficult the software was to use.[12] It is to be noted that Chris thinks this money came from Trump's wallet and not the Federal reserve. 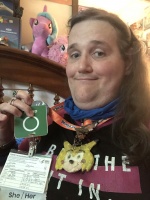 Chris received two doses of the Pfizer vaccine - first on 28 April 2021 and second on 17 May 2021. To identify himself as among those being fully vaxxed, he laminated his vaccination card with shipping tape and put it on a BronyCon lanyard to wear around his neck.[14]

Barbara was also fully vaccinated, receiving her second shot on 28 April.[3] Chris laminated her vaccine card with shipping tape as well and attached it to her purse.[14]

Central Virginia Regional Jail, like many American jails, has been hit with positive COVID-19 cases.[15], due to significant overcrowding within jails. However, Chris is isolated from other inmates, so the likelihood of him testing positive is low.