At one point in his life, Chris believed that it was possible to 'recycle' his Navy by drinking it; while he was technically recycling the nutrients, he didn't understand that during digestion, it would be destroyed rather than re-enter the body the same as when it left.

Biology is the natural science that studies life and living organisms, including their physical structure, chemical processes, molecular interactions, physiological mechanisms, development and evolution. Chris has talked a lot about biology yet lacks the knowledge, or common sense, of how the body works due to his damaged perception of it from media and television. He then ensues that he is in fact studied in it when really the most he knows would be about the same of 2nd Graders on the playground discussing Lara Croft's breasts.

One of the most well known facts about Chris is that he used to drink his semen. Chris believed that the male reproductive system has a limited amount of sperm cells that decreases every time he nuts. To counteract this supposed decrease, he drank his own semen to make sure he can get potential sweethearts (and 13 year old boys) pregnant. Although he has given up this act in more recent years, a video from 27 February 2016 shows that he now believes keeping semen inside his refrigerator will keep it viable not knowing that is actually kills the cells. Ultimately, the only thing this will do is give him ice cubes to use in his Fanta.

Chris also supported a claim that transgender women can get periods[1], which is false. Abdominal cramps are common for biological women during periods; for MTF women, this is impossible due the lack of a uterus. Feeling under the weather is also a common symptom of periods caused due to changes in hormones released by the female brain and uterus since Chris lacks both a uterus and common sense he is imagining his symptoms. While it is in theory possible to experience a form of sympathetic pain (pain felt by directly witnessing or viewing someone else in pain) related to periods, given Chris's preferred viewing habits and general apathy, it is unlikely this is the source of what he claims to feel.

Chris has been known to have a few misconceptions about male genitalia, one of the many problems Chris consistently suffers from with his is Urinary Tract Infections (UTIs), due to his issues with sanitation, brought on by sloth and poor parental influence. He also once believed the product ExtenZe was capable of enlarging the penis outside of puberty, which proved to be untrue, due to lack of results, and so Chris stopped using it fairly quickly. Chris also seems to be under a very strong impression that the size of the genitalia has a large bearing on one's social status,[2] or pleasure in sex, since he has often vastly over-estimated its size. He readily claims it to be 6 inches,[3] however most visual evidence suggests that it is perhaps from 3 to 5 inches, which is below average.

Chris also seems to think that the penis is an outwardly grown clitoris.[4] This, of course is inaccurate, due to their vast difference in functions, and could be a misinterpretation of the way fetuses form their genitalia in the womb.

Chris has been known to have a negative opinion of male genitalia, so when he officially became a trans-woman he saw fit to exchange his pickle for some china. However, surgery is notoriously expensive in the USA, and unfortunately no current health insurance plans cover delusions and magical thinking, so Chris had to do it the old fashioned way: Subliminal Frequency Hypnosis. Despite the apparent ineffectiveness of the Aural treatment at first, Chris could feel the vagina growing inside of him, so he freed it by cutting open his taint with a kitchen knife. Unfortunately, this still did not provide results that Chris was happy with, having only his pickle and a wound on his taint to show for his very careful meditations and precise surgical project. Chris has not tried to conduct any sexual reassignment that we know of since.

If he does eventually want to complete his sexual reassignment surgery, it is recommended that he should seek the guidance a healthcare professional. However, it is uncertain if there is a possibility of Chris ever being in a financial position to pay for the surgery. 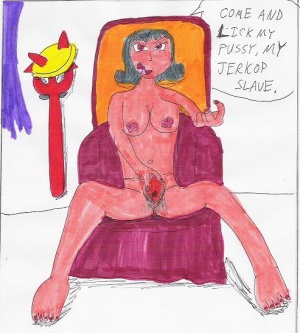 How to ruin a friendship in the most thorough of ways.

Another instance of Chris proving his ignorance of basic female anatomy is the infamous ShecameforCWC.JPG image. Not only is Megan's torso completely straight and has no waist, but once again Chris makes the vaginal opening far too large and uses blue lines to depict her squirtin', causing it to look like she has blue pubic hair or her vagina is glowing.

Chris rejects the notion that Asperger's syndrome is equal to autism, though it is a well proven fact in the scientific community. He thinks that people with Asperger's steal the limelight from people with autism, though this doesn't make any sense since not only are both of them on the same spectrum, but Asperger's is considered the same as the high-functioning autism that Chris is quick to call himself.

Chris believes that the mind and body are separate entities where the mind can move between different bodies I.e the body is nothing more than a vessel for his mind. This has never been proved and most research points to different inter-neuronal connections being the reason for different personalities.

Chris relationship with health and disease is hit or miss that is, he is hit with diseases and misses health.

During the COVID-19 pandemic Chris refused to learn about the symptoms of the virus saying it will make him more prone to being infected. He also watched the anime Cells at Work, a series featuring anthropomorphic blood cells taking care of a human body and claimed it would boost his immune system. Possibly thinking being worried of the disease will weaken his immune system and being happy will increase his immunity.