From CWCki
(Redirected from Computers)
Jump to navigation Jump to search

Chris has had a long relationship with electronics – yet he still struggles with their basic operation.

His most important tool is arguably his computer. His window to the world, Chris uses it to connect to the Internet, to talk with his fans, and to promote his way of life. Needless to say, just like everything else he owns, Chris manages to ruin it in some way, going through several over the years.

It's no secret that autistic people can excel when put behind a mouse and keyboard. Chris, the autistic challenge that he was, was introduced to computers as a toddler by his technically-inclined father. According to Chris, Bob led him into the digital world with a Commodore 64.[1] In 2018, Chris, feeling nostalgic, dug out said Commodore 64 and requested help from his fans to repair it. While Chris's ludicrous claim that he started playing on the computer at six months is obviously false, he definitely started structuring his life around computers at a very young age, and has never viewed reality without the filter of a PC.

Chris would go on to major in CADD, combining his artistic interest with his attachment to the tool that made his saga possible. He dabbled in HTML after taking a relevant college course, surely feeling like an accomplished computer scientist in the process. 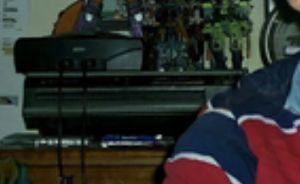 A CED player in the background of one of Chris's photo's

Chris has had experience with older bits of technology.

In a tweet from 1 June 2021, he discussed his early childhood. Part of the tweet mentioned that the Chandler family owned a Capacitance Electronic Disc player, which was a failed early-80s video format that worked in a similar fashion to vinyl records, but used plastic caddies for storage and loading the discs into the player. Chris still had the CED machine as late as 2005 - it can be seen in a photo of himself taken around that time. The CED player was probably destroyed in the 2014 house fire.

Chris has also had a lengthy history with the CED's more successful competitor, VHS cassettes, having grown up when it was the dominant home video format, prior to the rise of and eventual supplanting by DVDs in the early 2000s. Much of the available footage we have of Chris prior to the mid-2000s came from videotapes.

As of 2010, Chris used his family's HP Pavilion desktop computer, located in his kitchen.[4] It ran Windows XP, had a scanner and a printer (or perhaps a scanner/printer combo) that allowed him to scan comic pages and print artwork, and had a version of Adobe PhotoDeluxe installed on it,[5] which Chris primarily used to type in text bubbles for his comics, or to alter the truth.[6] Since he had been able to connect to Mumble voice chats, and efficiently watch YouTube channels, it was presumed that Chris's computer also had a broadband internet connection, which was slightly rarer in rural areas at the time, but not unheard of.

An August 2011 video, however, revealed that Chris had a new computer loaded with Windows 7. Another video confirmed it to be a hand-me-down HP laptop. Chris claimed that he had upgraded it, but further details are unknown. The laptop also has Mozilla Firefox and iTunes installed on it.[7]

Most of Chris's computers appear to have survived the fire, including his laptop and his upstairs PC, although some data was lost.[8] Chris used his iPhone to communicate with his fans on Facebook and upload videos to YouTube during his year of exile. The Rental House apparently had a computer and an internet connection, so it is possible that Chris used it as well.

As of 2017, Chris owns an Asus gaming laptop that he used for Live Drawing Streams and to play Steam.

From at least the early 2010s, Chris has been a loyal user of the iPhone. In 2013, he built the Idea Book Case to hold his iPhone 5 and two iPod Touches he'd switch out for different content. He used the iPhone for anything requiring cell service, and the iPods for media and light computing. As of 2018, Chris has two identical iPhones, one for business, and the other for personal calling. He most likely can afford the deal because phone companies regularly offer buy-one-get-one specials on new units. As of 2021, his phone number for personal calls is (434) 409-1167.[9]

In May 2020, Chris got an iPad and stylus to attempt digital art.

To hear Chris tell it in 2010, his computer was on its last legs. In his conversations with Alec Benson Leary, Chris complained that multiple power surges (resulting from blackouts in his area) had disabled his computer for days at a time, forcing him to restore it constantly. In mid-February 2010, this was his excuse for failing to regularly upload new comic pages. When Alec reasonably asked him why he didn't just buy a new, more reliable computer, Chris claimed that he didn't have the money. (A low-end replacement for his machine, powerful enough for his purposes, would have only cost a few hundred dollars, but apparently Chris had better things to buy.)

Chris often claimed to be unable to upload videos for Jackie, or chat with her via instant message, because he couldn't get his computer to start up. This caused him much stress and discomfort because he worried that she would feel that he was neglecting her, and would break up with him. Chris complained that he didn't have the money for a new PC, but all the while continued to buy new video games for his second PS3. To make things worse, Chris revealed that there was a second, working PC in the house, and the only reason he didn't attempt to use it is because it that was blocked by a pile of clothes (which, incidentally, was the same excuse he used for not showering).[10]

Despite having taken a course in computer construction, Chris did not know the difference between RAM and hard drive space.[11][12] When confronted about forgetting things so often, he claimed that his memory worked like RAM, believing the "random" in RAM means that it only works some of the time, or randomly (despite the fact that it almost means the exact opposite: that it can access any requested piece of information at any time, regardless of order).[13]

Chris had believed that he could shock his quartz crystals, through the use of the phenomenon piezoelectricity, to create portals. He believed he could use a taser to shock some of his Magic Stones as a means to starting the Dimensional Merge.