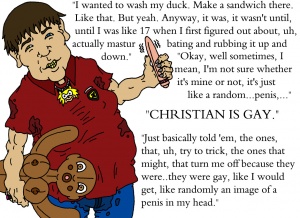 As always, our talented team of illustrators is happy to provide visual representation.

Surprisingly, this chat sees Chris using the word "naïve" correctly and in context.

Some of this chat is more intriguing than disgusting. Chris talks about the "random thoughts" that inspire his fear of becoming a homo, such as mental images of a penis and voices telling him that "Christian is gay." He claims to have a "philopathic memory," whatever that's supposed to mean.

Later, Chris and Julie mercifully turn to more mundane topics. Chris talks about the sources of his credit-card debt, which added up to around $2,000 at this point. Some of it was apparently just bad luck, like a flat tire on Son-Chu, but most of it came from his flood of PlayStation Network downloads and other impulse purchases. In a flash-forward to the Kacey saga, Julie tries to convince Chris to exercise more. Chris, of course, merely promises to do a bit more standing up.

At the end of the chat, Chris makes a fateful mistake and gives Julie his PSN account password. He would eventually come to regret this.

[Chris and BlueSpike/Julie are chatting. BlueSpike is not making any effort to disguise his voice, but Chris is oblivious.]