Toffee Rosechu is a fantasy enabler who created an OC named Toffee whose story involved having a relationship with Punchy Sonichu. She distanced herself from Chris following the incest revelation, writing that Toffee and Punchy broke up.[1]

Toffee is a pious Catholic girl who was raised by nuns, which makes her a rip-off of Chris's own character Angelica. Unlike Angelica, however, Toffee insists on remaining celibate before marriage.

Following Toffee's tweet in which she commented about a family tragedy while expressing skepticism at Chris's belief system, Chris reached out over DMs. 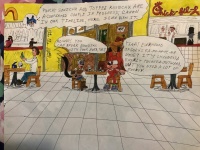 The drawing, part of the Everfree Northwest fundraiser.