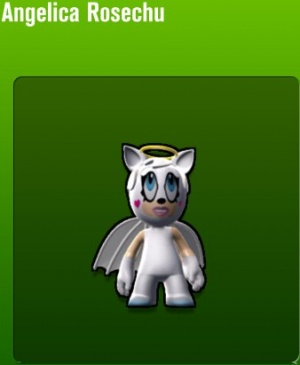 Angelica is a Rosechu, and a member of the Chaotic Combo that formed from eggs released by the Chaotic Rainbow. She is a Flying/Electric type. Despite the fact that she was hatched in 2004, Chris insists that she is over 18 so that he is not considered a pedofork for his pictures of Angelica mass debating.

Angelica was brought up in a strict Catholic convent, with nuns being the only family she ever knew. Her painfully bleak upbringing clashes with her apparently insatiable sexual appetites. The fierce repression of her youth, in the cold surroundings of the brutal convent, led to her later rebellion which tragically took the form of her indoctrination into the Chaotic Combo. She went from diligently worshiping Jesus to being nothing but a masturbatory aid for her demented creator, another lobotomized beast rattling around in the bird-cage of Chris's mind.

Like other Rosechus, she has no discernible personality whatsoever, aside from a verbal tic ("Lord") that Chris claims is indicative of a pious Catholic personality. Chris calls Angelica a "peacemaker", which is curious because the folks of CWCville normally don't end up in any kind of quarrels; when they do, Angelica is seemingly powerless to prevent it or offer any other form of assistance.

Angelica is the only prominent Electric Hedgehog Pokémon never to have had a tail (Punchy's was torn off). The reason for this is yet to be revealed.

She is a combination of three characters:

Angelica's egg came into the possession of a group of nuns, who nurtured the egg until its hatching, revealing a small, white, winged Rosey. After learning how to fly under the watch of nuns, she evolved one night in her sleep, which Chris commemorated by breaking into her house, implying that he frequently watched her sleeping as a child, and leaving her some shoes and a scrunchie.

Angelica meets the Chaotic Combo moments after planting a flower garden and viewing it from above, when all of a sudden, Blake and Punchy come crashing through, shortly followed by the rest of the Chaotic Combo. After a short discussion, Angelica and the gang beat Blake up. It is established that Angelica's main mode of attack and defense is through using her wings rather than any electric powers.

Like the rest of the combo Angelica is summoned into battle by Chris but just like everyone not named Chris, Crystal, or Megtune, she doesn't actually do or say anything the entire issue.

In this issue, Angelica pretends to be concerned about Chris's imaginary twin sister getting trapped in the mirror one minute, and the next minute she talks about Bionic the Hedgehog’s great basketball skills. She and Bubbles think to themselves “What a dreamboat," in a moment of shared demented lust.

While sunbathing with Rosechu, Angelica makes the mistake of asking Bubbles why she doesn't need sunscreen, and is subjected to a long boring lecture. After Blake shows up and kicks sand at them before being led away by Bubbles, Angelica and Rosechu giggle about Blake's faux-macho attitude. Later, after Bubbles retrieves a Sonichu Ball from the ocean, she hands it to Angelica, who flies it back to Patti-Chan who is at the Cwcville Mayoral Office.

While absent for most of the episode, Angelica shows up on the last few pages to randomly hook up with Reginald Sneasel for no reason whatsoever. Apparently she's only attracted to pathetic losers and is a liar or an extremely poor judge of character, calling an obsessive liar who partakes in acts of vandalism "honest" and "sweet".

Angelica is shown waking up in bed with Reginald at her church home, removing all doubt that she's a dirty whore. She's later seen taking down several flying enemies. She precisely forms a pentagram around her church, making her supposed devotion to Catholicism even more doubtful.

Angelica reads the Asperpedia Four their "last rights", and is one of the people pushing the buttons on Alec's ten-button electric chair. She thinks "may God have mercy".

Angelica helps set a table at her church. She's also shown at the Shopping Center with several other Sonichus and Rosechus. She's paired with Punchy, which ends up proving that she's a two-timer.

Angelica is given a special Razor Claw by Wild, which she makes into a special necklace for Reginald, in case he ever wants to evolve. Once he does, he destroys her room and breaks up with her, due to uncontrollable rage.

Part 2: The Clip Show: Catching Up

Angelica attends Sonichu's and Rosechu's wedding. She helps comfort Rosechu when the tension is getting to her.

Angelica went through the first eight Sonichu comics not showing any interest in any of the male characters, before finally shacking with Reginald Sneasel in Episode 19 after he called her cute. Given that Reginald is basically a Chris stand-in, it's generally assumed by trolls that Chris would like his relationship to start in a similar manner: a girl throwing herself at him not in spite of the fact that he's pathetic, but because of it. As of Sonichu 11, they appear to have broken up after Reginald went on a rampage during the night and trashed their room, then running off to have sex with Layla as Angelica is left to clean up his mess. With Punchy's break up with Layla, possibly Angelica and Punchy will get together?

Chris drew Rule 34 of Angelica, which he uploaded to Encyclopedia Dramatica, hoping that it would encourage Jason Kendrick Howell et al. to remove his article. Predictably, his plan backfired, resulting in an increased interest in him and his work.