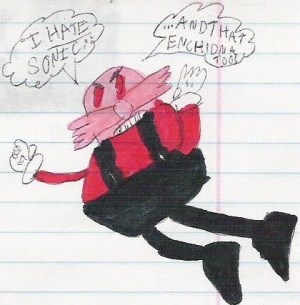 A rendering of Robotnik in Nintendo Power

Doctor Robotnik (full name: Dr. Ivo "Eggman" Robotnik) is the main antagonist of the Sonic the Hedgehog series that Chris rips off for his own purposes. According to the user's manual for Sonic Adventure 2, Robotnik has an IQ of 300, which is likely the reason Chris makes the same claim about his own intelligence.

Robotnik is briefly alluded to in Sonichu #0, and he makes his first actual appearance in Sonichu #1 as the issue's primary villain. He also makes a guest appearance in the homemade Nintendo Power magazine. Robotnik seems to be head research scientist for Giovanni where he orders around the enigmatic Bill, a lab assistant. He is also a member of The Private Villa of Corrupted Citizens, as well as the creator of Black Sonichu/Blake, a clone of Sonichu genetically engineered to be Sonichu's superior. In the same issue, he was also shown to be responsible for the creation of Metal Sonichu - ripping off his own creation, Metal Sonic (who first appeared in Sonic CD).

Robotnik was last seen towards the end of Sonichu #9, where Robotnik, Giovanni, and Reldnahc hold Rosechu captive while Giovanni asks Sonichu whether he'll choose his girlfriend over CWCville. He and Reldnahc are then knocked out by an unseen force (because apparently someone KO'd them from behind or something) and they have to retreat while Reldnahc shits himself in embarrassment.

Robotnik's presence in the comic initially appeared to be that of an antagonist, or at the very least a supporting character as part of the evil cabal who attempts to thwart Chris. The fact that he is the villain of the Sonic games also seems to reinforce the fact that Chris has blatantly ripped off a far more entertaining plot line. Robotnik even remarks that Black Sonichu looks like Shadow upon his creation in Sonichu #1.

Robotnik's goal in the whole story is never really stated. It can be assumed that he just wants to be an evil overlord like everybody else, cockblocking Chris for the fun of it. In the actual Sonic the Hedgehog series, Robotnik is a maniacal scientist hellbent on defeating his rival Sonic and imposing his own view of Utopia upon the world. However, in Sonichu, he just seems like a total fruitcake. Despite this, the fact that he is fat, claims to be extraordinarily intelligent, all while being a bumbling idiot who is always defeated shows that he is actually more representative of Chris than the actual comic character of Chris. 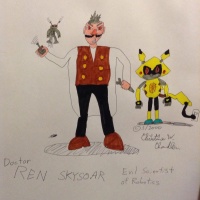 As with many characters, Chris retconned Robotnik in 2015 to a new and original character, Doctor Ren Skysoar, who took Eggman's place in the new prints of the early Sonichu issues. Chris probably made this change in a misguided attempt to make Sonichu more original, despite the fact that Skysoar is still a blatant copy of Robotnik, and that the very same comic still includes Sonic the Hedgehog, who would be harder to alter into to a less obvious ripoff. Meanwhile, Giovanni is inexplicably left unchanged.

A fellow roboticist (or an Evil Scientist of Robotics, according to Chris), Doctor Skysoar has a similar frame and appearance to Robotnik, but wears a labcoat and brown waistcoat combination, black trousers and brown shoes, and has spiky grey hair, red eyes, a giant pink nose, bushy eyebrows, and a curly, black moustache resembling that of Wario, or insurance mascot Gio Compario. Notably, he's also seen standing with Metal Sonichu, technically making this drawing (Despite it being a retcon) the robotic duplicate's first new appearance in years. 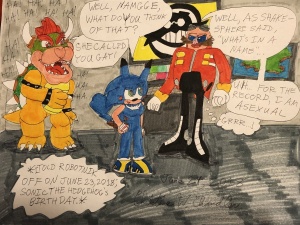 "She called you gay!"

On June 23 2018, Chris attended TooManyGames convention, where he asked Eggman voice actor Mike Pollock a question at his panel. Chris suggested to Pollock that Eggman should once again use his Robotnik name as Eggman backwards sounds similar to "Nah I'm gay". Pollock, in his response, cited William Shakespeare.

In the aftermath of the convention, Chris produced a one-off drawing, which saw the original Sonichu incarnation of Robotnik return. In the drawing, Chris Chan Sonichu asks Robotnik the Namgge question, to which the Doctor is put on the spot as Bowser mocks him. Chris establishes that Dr. Robotnik is asexual.