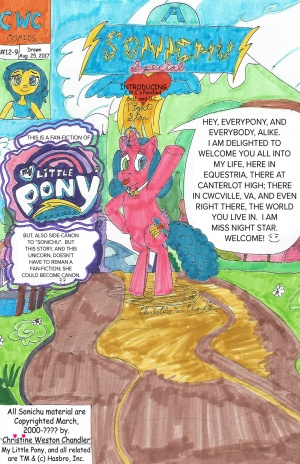 We'll do our best to explain it...

Considering Chris's looming detachment from reality at the time, and that the source material is based on a very niche franchise, issue #12-9—at least, until the follow up—was perhaps the most head-scratching of the comic book series. Henceforth, the following article will attempt to analyze Sonichu #12-9 for puzzled readers.

The story is broken into four acts:

There are multiple worlds and dimensions featured in the comic. As stated in the opening disclaimer, Chris believes that all events in the comics actually happened, so writes his comic as if they were a recollection of past events.

For the most part, the story takes place in Dimension C-197 – the dimension where fictional franchises all co-exist. Within this dimension—or as the comic permits it—exist multiple separate worlds that can be traversed via portals by exceptional characters/Mary Sues. These include:

By following the My Little Pony rules, Chris has correctly stated that pony characters and their human equivalent characters exist in Equestria and the Canterlot High world, respectively.

In the MLP spinoffs, when a pony crosses into the human world, they transform against their will into a human and vice versa; thus, two versions of one character may be present in one universe. Regardless of the fact that the transformation would occur by default, Chris remarks on multiple occasions that Night Star uses her abilities to transform herself and any accompanying characters.[2][3] This would therefore render the newly introduced Konami Code plot device—which characters can use to prevent unwanted transformations—unnecessary.

Our universe is also portrayed (later dubbed Dimension 1218). 1218 is represented in any scene when real life Chris is communicating to C-197 through a portal. The aforementioned transformation rules also apply here.[4] 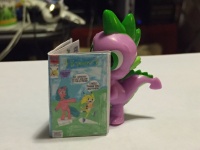 This is probably what it looks like in Equestria.

The primary protagonist of #12-9, Night Star is Equestria's manifestation of Chris (otherwise known as a ponysona in the brony community). Bearing in mind that they are separate entities, Night Star explicitly states that she and real life Chris are linked psychically, and share some similar life events. Night Star engages in her own Love Quest, firstly with Diamond Melody (Act 2) and with Kun T'Nyuget (Act 3 onwards).

In Equestria, she writes the infamous comic book series, with the all humans presumably replaced by horses. Despite her mundane role as a freelance comic book writer in the society, Night Star possesses abilities comparable to that of the royalty in the source material; she is virtually flawless and immensely overpowered. A notable ability of hers is that she can transform at her own will between several forms, including Electric Hedgehog Pokémon, Night Star Rosechu, because it all has to tie-in somewhere.[5][6]

Night Star's origins date back to early 2017. Both her name and cutie mark were appropriated from quizzes which generated results based on user answers. Chris revealed Night Star on 3 June 2017 and the character was used to bind Chris to My Little Pony henceforth.[7]

Also known as Christine Chan, Comic Chris is the father mother of Sonichu and the CWCville OG; he was devised as an attractive, fit, articulate character for Chris to self-insert himself. Reflecting on real life Chris's new gender identity, the character transitioned from male to female in Sonichu #11. She is also Night Star's CWCville counterpart, and the secondary protagonist of this comic.

In #12-9, Christine Chan is described as a "prototypical friend", as Chris based her yellow-skinned design on his predecessor MLP self-insert doll, known as the "Christine Doll", created no later than August 2016.[8] The original doll was a custom, using pieces from other character dolls such as Vinyl Scratch's skirt/cutie mark, and met its end during the Idea Guys' rampant manipulation of Chris in January 2018, in which he used a bed frame to smash it to pieces.

In Act 1, upon entry into Canterlot High School, Night Star slaps a cutie mark on comic Chris's thigh, which activates a transformation in her. This instantly adjusts her appearance to match that of her Equestria counterpart, and brings her into "mental sync". Behind the scenes, having created an identical copy of Night Star, Chris was forced to change the color of the CC's skirt for the duration of her appearance. Chris went through with the transformation scene as a way of C-197 Christine discovering her true self, but also paying homage to the previously favored doll design.

In August 2020, after years of confusion among Christorians, Chris finally removed any doubts by remarking that he had made an error in his comic book, and that the character was in fact Comic Chris:

Aside from the appearance in Act 1, C-197 "Christine" is name-dropped on a few pages: 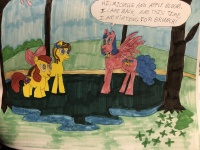 How Chris thinks he literally appears in Equestria.

When a character invokes Chris.

The doll-copulating, PlayStation-humping, semen-freezing Chris we know in real life literally appears in the comic. He is not to be confused with the Mary Sue Chris addressed above.

Chris achieved inserting himself into his comic by pasting selfies onto the comic pages and adding text boxes/visual effects around them. The comic attempts to distinguish IRL Chris from Comic Chris by replacing the Proxima Nova font with part of Chris' signature when anyone refers to him.

As if the issue wasn't complicated enough to understand, Chris concludes the issue with himself crossing into Equestria and turning into an alicorn – which is basically a Night Star lookalike with pegasus wings. The final page sees Chris and Night Star break the fourth wall to say goodbye to the reader. In the Friendship is Magic series, alicorns are a species normally reserved for elite characters such as the princesses, or in fan productions, for important figures behind the show such as creator Lauren Faust. Consequently, Chris' decision to present himself as an alicorn is arguably the brony equivalent of sacrilegious.

In the midst of drawing issue 12-9, Chris started his relationship with Jessica Quinn, which lasted from September to October 2017. Having previously used this approach as a legit romantic gesture, Chris immortalized his sweetheart in his comic book series.

Three separate counterparts of Jessica are featured in #12-9:

Act 2 depicts Night Star and Equestria Diamond Melody's relationship. The relationship is ultimately severed due to a meta reason: Chris shoehorns into the comic that Jessica was a troll, which compels the fictional Diamond Melody to move away from any location where the plot may visit because of the shame of being a universe counterpart to a kinky troll.

In Act 1—which actually succeeds 2—the plot takes a slight detour when Night Star directs Comic Chris to the Canterlot High Diamond Melody. Night Star is familiar with Diamond Melody due to their relationship. Thus, she understands that CC and human Diamond Melody have an equal opportunity to become sweethearts. Unlike the pony versions, the human couple's fate is left unknown.

1) Night Star is born to Gallop Crush and Sugar Darling.

1) Night Star sees glimpses of Chris and realizes her psychic connections to Chris. Also receives cutie mark on this date.

1) Night Star sees Diamond Melody outside Cloudsdale Colloseum at 4:45 PM and starts talking to her.

1) NS portals her way into CWCville after collecting ingredients requested by Sunset Shimmer.

3) NS teleports to KCWC Radio center to discuss about a concert being organised in Equestria.

4) NS warps to Canterlot High, meets Comic Chris and asks her to date Diamond Melody, then meets Pinkie Pie and hands her the balls.

5) NS meets Sunset Shimmer at the laboratory and hands her the requested ingredients.

1) Diamond Melody moves away to Las Pegasus after realizing that Jessica Quinn was a troll. Relationship lasted for almost 144 days.

1) Discord organises a race in CWCville.

2) NS and KH go back home and meet each other at the market again in an hour.

3) NS and KH teleport to GE plant and during the tour Rei Ryhts attacks CWCville.

4) NS leaves KH behind at factory to fight Rei. KH runs behind NS.

5) NS uses portals to push Rei into a void, but a second portal pulls NS into the void as well. KH tries to catch NS but fails. Magi Chan teleports KH back to Equestria.

6) Rei uses NS's power to restore and teleport the nation of Tari over CWCville, then throws NS off the floating island.

7) Magi-Chan catches NS during her fall and teleports her to Franklin Chandler Memorial Hospital. NS falls into coma.

1) KH visits NS daily at hospital. On this date, NS wake up from coma.

2) KH takes NS to his home, later NS and KH live together at NS's home.

3) NS and KH go to CC's ship in the docks after conversing with her.

4) NS and KH meet Pea-Tree, then find Squaker in the study.

5) Ten minutes later in the Galley of the ship, Tempest Shadow (aka Frizzle Pop Berry Twist) finds NS and KH and offers help.

6) NS, KH and Tempest teleport to the Storm King's base.

7) While gathering evidence, traps get triggered forcing the gang to teleport half a mile from the base.

8) With the gathered evidence, NS and KH solve the rift between Squaker and Pea-Tree.

1) NS and Chris completes writing the 4 arcs on this day.

1) Chris finishes up the comic by completing the last 4th wall breaking scene.

References to My Little Pony lore