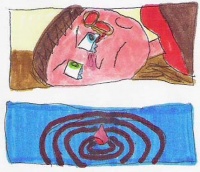 The Passion of the Christian.

Sub-Episodes are side stories in the Sonichu comics, set apart from the main story of Sonichu. They are centred around Chris, and are re-tellings of real-life events that happened to him based within the continuity of the comic books. They are featured in Sonichu #0 through #3, with #4 as a special compilation issue with 4 new sub-episodes.

Trolls generally prefer the sub-episodes to the regular comics, as Chris's IRL exploits where he is trolled by mall security guards tend to be more amusing than the bland adventures of a Mary Sue Sonic recolor.

Each sub-episode is inspired by, or based upon, some actual event in Christian's life, typically something from the years of 2004 to 2005 that in some way involves or affects his continually unsuccessful Love Quest. Sub-Episodes #1, #4-5, and #7-8 are based on the well-known confrontations Chris had with either the Jerkops or Manajerks in various places around Charlottesville, specifically for loitering with intent to attract a boyfriend-free girl.

These particular comics tend to follow a general structure: Chris is confronted by a Manajerk and mocked for his quest for a sweetheart, to which Chris takes offense before transforming into Chris-Chan Sonichu in order to do battle. He is ultimately defeated, however, necessitating the arrival of one of his characters to save him. After his foes are vanquished so that they cannot make him leave, Chris delivers a self-important speech with an excessively specific, Chris-centric moral and leaves anyway. Sub-Episode #6 acts as a companion piece of sorts, profiling the various Jerkops and Manajerks out to get Chris (as well as serving up another tiresome, self-righteous monologue).

Sub-Episode #2 and #3 are somewhat different; #3 is a fairly boring confrontation between Chris and Mary Lee Walsh based on his numerous grievances with her as a major obstacle in the Love Quest, featuring a rare cameo of Sonichu. Sub-Episode #2 is perhaps particularly notable for involving absolutely no fighting or action whatsoever, and is entirely about Chris being tricked by Hanna into thinking she likes him. This particular incident got Chris banned from the mall for screaming in anguish after finding out she was just screwing with him, though this detail is absent from the comic.

The Sub-Episodes, being as they are, are interesting on a few levels. For one, they are his way of seeking external validation - by presenting these stories as injustices towards his good self, he hopes that the reader (especially a particular type of reader) will sympathize with and pity him, and perhaps eventually love him. For this reason, the stories always assert Christian's righteousness while dwelling on his pain and suffering. They are also good examples of his tendency to resort to exorbitant power fantasies in order to right perceived wrongs against him, which would become more evident in later issues of Sonichu. Chris ultimately paints himself as both a powerful hero flattening his evil enemies, and a tragic loner desperate for company, in an act of both wish fulfillment and attention-seeking self pity.

Whilst only one Sub-Episode appears in each of the first 4 issues of Sonichu, It's easy to interpret their inclusion as Chris using his comic book to attract attention and sympathy to his own plights in a sort of Trojan Horse scheme. This is certainly plausible, considering that Chris had done something similar not too long beforehand. This all leads to a familiar conclusion applicable to many of Chris's hobbies and activities of the time; that the Sub-Episodes were yet another extension of his all-consuming quest to find a sweetheart.

Chris was, at some point before the release of Sonichu #5, asked to stop making the Sub-Episodes by his mother. It's not entirely certain, therefore, whether the content of Sonichu #4 was caused by this in an attempt to get all of them out of the way in one fell swoop, or whether Barbara was uncomfortable with the fact that Chris had produced an entire comic book centered entirely around himself and asked him to stop. In any case, none of the issues past #4 would contain Sub-Episodes.

Chris's tendency to integrate aspects of his life into his comic strips would continue to affect the overall story of Sonichu, with #5 straight away involving the marriage of Sarah Hammer and the particularly well-timed introduction of new-found best friend and potential sweetheart Megan Schroeder. This would come to a head in Sonichu #10, which is best described as a rampant ego trip set against a background of Chris's war with Asperpedia colliding head-on with the already warped continuity of Sonichu.

The Sonichu Special comics are also worth noting, though they involve "real" people in Chris's life within fictionalized events.